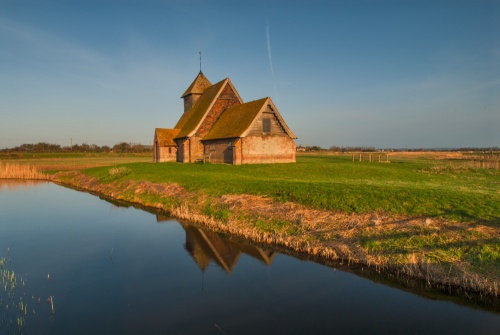 At one time there were 28 towns and villages in Romney Marsh. Today there are 17, including the major towns of Romney and Lydd. One of the 11 'lost villages' is Fairfield, near Brookland. Only a few farmhouses remain, but alone in a field, surrounded by grazing sheep, stands the 13th century 'Isolated Church' of St Thomas Becket.

The only way to reach the church is by footpath across the damp marshes, but the reward for your exertions is one of the most picturesque settings for a church in England. It was once even harder to reach the church, which was often stranded by water during the winter and spring until a water course was dug in 1913, with a causeway for access.

Sometime around AD 1200, a simple structure of timber and lath construction was built as a purely temporary measure to provide the local farmers with a place of worship. Temporary became permanent, and the 13th-century building survived intact until the 18th century when the entire timber building was encased within brick walls, and the roof covered with heavy red tiles. Then in 1912, the entire church was disassembled, and rotted timbers replaced. As much of the original 13th century material as possible was reused.

The interior is pure Georgian theatrics; entering the church is like stepping back into the 18th century. The interior is filled with rows of box pews, painted bright white, with a triple-decker pulpit rising over them and Biblical texts staring down from the walls. There is a peculiar seven-sided font, but for me the real treasure is the interior timber-framing, with low timber arches stretching over the nave.

Fairfield church has been used for several films and TV series, including the BBC's adaptation of Dickens' Great Expectations.

The church is usually locked, but there is a local keyholder. As of this writing, the key is held at Becket Barn Farm, postcode TN29 9RZ, a few hundred yards west, near the beginning of the footpath. 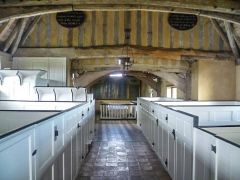 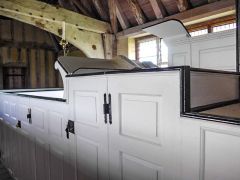 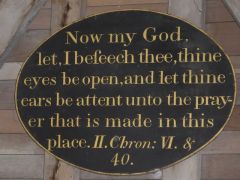 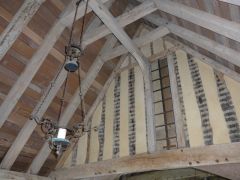 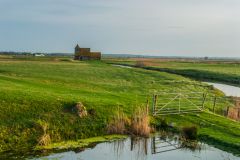 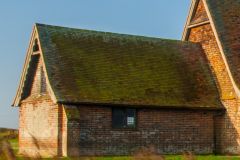 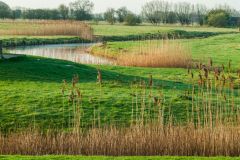 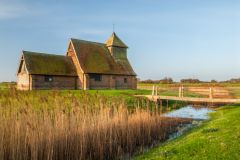 About Fairfield, St Thomas Becket
Address: Fairfield, Kent, England, TN29 9RZ
Attraction Type: Historic Church
Location: Located on a footpath off a minor road at Fairfield, 1.5 miles west of Brookland and one mile north of the A259. Postcode is for Becket Barn Farm, where the key is usually held.
Location map
OS: TQ966264
Photo Credit: David Ross and Britain Express