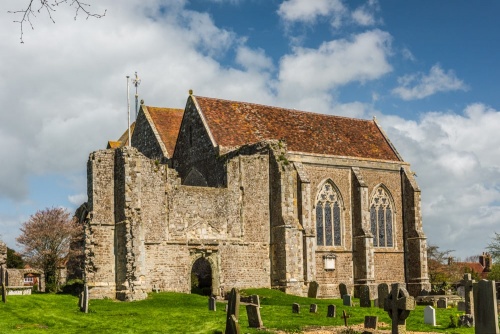 Winchelsea's parish church, dedicated to St Thomas the Martyr (St Thomas Becket), dates to the late 13th century, when the original port of Winchelsea was abandoned due to flooding and a new planned town erected on a low hill above the River Iham was begun on the orders of Edward I.

The planned town was laid out on a grid pattern, with St Thomas the Martyr occupying a two-acre site in the centre of the grid. It seems like that construction began in 1288, using Caen stone from Normandy.

The new hilltop town of Winchelsea had two parishes. The major church was St Thomas the Martyr, while the second parish church was dedicated to St Giles and stood where the rectory was later built. The parishes were united in 1534, and there are now no traces left of St Giles Church. 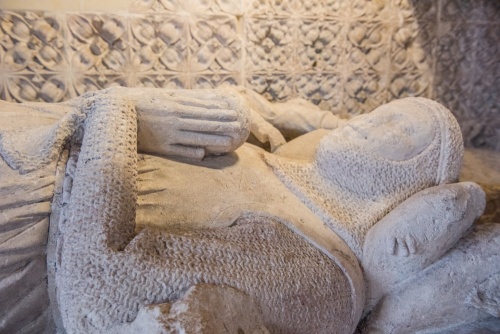 The new church of St Thomas the Martyr was under direct royal patronage. It was planned to be a cruciform building, with an aisled nave, side chapels, transepts, a chancel, and a central tower. However, the transepts were never built, and the nave was never finished. The result is an oddly truncated building, quite obviously meant to be much larger in scale, with no nave or transepts, a chancel and side chapels that act as aisles.

An alternative version of the church's history says that the nave was finished, but was burned in an attack by the French in 1380 and was never repaired. The port of Winchelsea fell into decline as the harbour silted, and there were no funds to repair the church tower, which was allowed to collapse.

In the 1660s the diarist John Evelyn described Winchelsea's parish church as a 'forlorn ruin'. John Wesley preached in the churchyard in 1790 and described the building as 'now in ruins'. In the following century, the church was described as almost unfit for worship, but restoration had to wait until 1850. 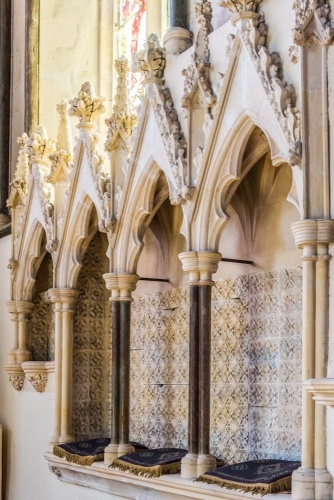 The chapels and chancel are all of the same height, forming a hall church in a style commonly found on the European continent but seldom in Britain.

We do not know the name of the master mason responsible for the new church, but historians have suggested several names, among them the men responsible for the Eleanor Cross in Cheapside, Greyfriars Church in London, and Winchester Cathedral. Whoever the mason was, it seems clear that he was very highly regarded by his royal master, and this is an indication of just how important Winchelsea's new church was to Edward I.

Given its truncated design, the church interior seems small, but this is more than compensated for by the wonderful period detail. The timber roofs are mainly original, though the north chapel roof has been heavily restored. 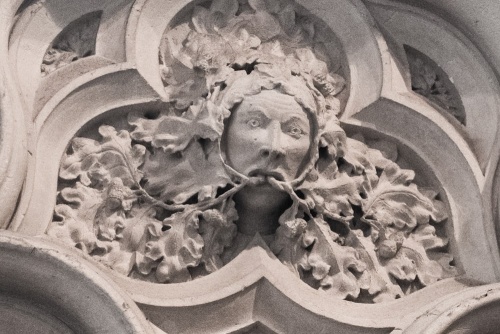 The major reason to visit St Thomas the Martyr is its wonderful collection of memorials, considered among the finest in England. Five of these tombs commemorate the Alard family, who founded chantry chapels in the south aisle. These chantries old superbly carved effigies beneath ornate canopies.

The first chantry was established in 1312 by Stephen Alard, who left money for a tomb commemorating his father, Admiral Gervase Alard.

Admiral Gervase's effigy shows him in full armour, with his clasped hands holding a heart. An inscription on the tomb base promises that anyone who prays for the deceased's soul will be granted 50 days of pardon. Look for carved heads depicting Edward I and Queen Margaret in the canopy arch. 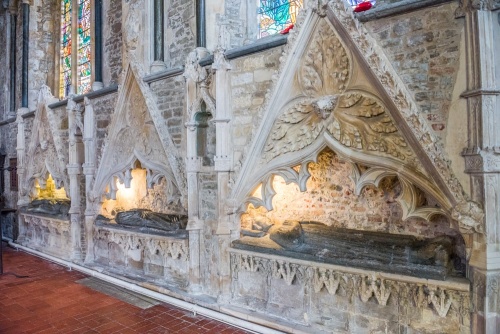 The second Alard memorial is from the early 13th century and shows carved heads depicting Edward II and Queen Isabella of France. It is not certain whose tomb it is, but it seems likely that it is Stephen Alard himself.

Both of the Alard tombs are carved with small Green Man figures in the centre of the canopy.

Perhaps the finest memorial is to Robert de Winchelsea (b 1230), a native of the town who entered the Church where he rose to become Archbishop of Canterbury. Archbishop Robert officiated at the marriage of Edward I to his second wife, Margaret of France in 1299. Archbishop Robert is buried in Canterbury Cathedral, but a memorial was erected here, in his birthplace.

Another highlight is much more modern; three stained glass window given over the period 1929-1933 by Lord Blanesburgh, who was then a resident in the town. These windows were designed by Douglas Strachan and are regarded as among the finest stained glass of modern times. The windows depict the themes of Land, Air and Fire, and Sea. 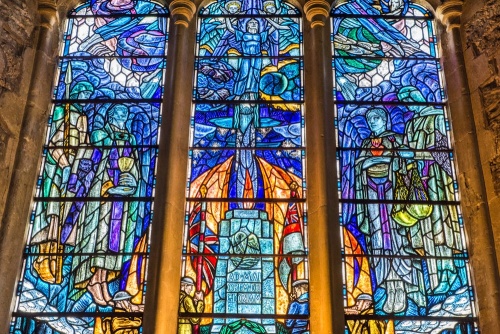 During the Peninsular War (1808-1814) large numbers of soldiers were posted to Winchelsea, where they lived in barracks on Barrack Square. The church register records that 72 soldiers from different regiments are buried in the churchyard.

The church is located off High Street in the centre of town. There is no dedicated church parking, but we found it easy to park along a side street.

We loved visiting this church! The setting, in the centre of historic Winchelsea, is wonderful, and the medieval memorials inside the church are stunning. The church was open when we visited.

More self catering near Winchelsea, St Thomas the Martyr

More bed and breakfasts near Winchelsea, St Thomas the Martyr