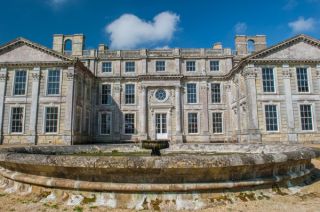 Appuldurcombe is an18th-century Baroque house approached via a long private drive. The house sits in lovely gardens designed by Capability Brown. The house is sadly little more than a shell, but you can admire the wonderful architecture and enjoy the 11-acre gardens. Displays tell the story of the house, and there is a falconry centre on the site.

Appuldurcombe House was begun in 1701 by Sir Robert Worsley, on the site of an earlier Tudor manor. The Tudor house, in turn, was built from the ruins of a Norman monastery dissolved at the Reformation. The house was not finished until 1772.

In that year Sir Richard Worsley returned from a Grand Tour of Europe. Inspired by the classical landscapes he had seen on his travels, Sir Richard hired Lancelot 'Capability' Brown to design the grounds surrounding his family home. Brown built a series of eye-catching follies on the crest of nearby hills. One of these was an Obelisk (now only a stump) commemorating Sir Robert Worsley.

He also built a folly called cook's Castle, which no longer exists. Brown created a winding, serpentine drive from the house to the Obelisk, created to give carefully designed glimpses of the house and grounds. a similar winding drive linked the house to the Freemantle Gate, the main estate entrance from nearby Godshill. 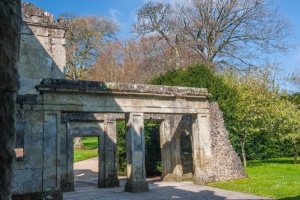 In 1805 Appuldurcombe passed to the Earl of Yarborough. The Earl altered the grounds surrounding the house, adding a fountain directly in front of the entrance, building servants quarters, stables, and winding paths amid carefully planted plantings of exotic trees.

The family fell on hard times in the 19th century, and Appuldurcombe served in turn as a school, a hotel, and a monastery. After 1909 it was left to decay. The decay was accelerated in 1943 when the house was hit by a landmine. It was taken into government care, and English Heritage have gradually restored parts of the house and recreated the gardens.

The highlight of the Appuldurcombe interiors is the Great Hall, begun by Sir Robert Worsley, the 4th baronet, in 1701. It was the finest room in the house and was used for entertaining and as a withdrawing room. In the 1770s the ceiling was raised and scaliogla columns inserted to give the room a classical Italian feel. The scagliola is coloured to resemble polished porphyry, and complements the marble floor inserted at the same time. The Drawing Room was used as a dining room when Appuldurcombe served as a school between 1867-1896.

Occupying the south wing and built in 1701, this chamber was later divided into three sections; a library, billiard room, and grand staircase. In the 1830s the 1st Baron Yarborough removed the inner divisions and added a striking Italianate external colonnade and balustrade. This colonnade is one of the most striking and appealing parts of the house, even though it is one of the most recent features. 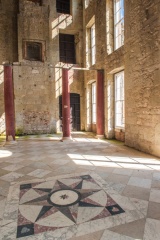 Another interesting feature is a porte-cochere, a covered porch large enough for a coach and horses to drive under. This allowed the coach passengers to alight in comfort, sheltered from the elements. It is curious, however, that the port-cochere is set at the rear of the house rather than the front!

Also worth exploring is a series of underground tunnels connected to storage chambers, running underneath the body of the house. Children will love exploring the tunnels, but I would not have cared to be a servant have to use them regularly!

When we were planning a trip to Appuldurcombe the English Heritage website had a warning notice that even EH members like us would need to pay an admission fee. However, when we showed our cards at the admission desk we were allowed in for free.

I had assumed that some of the house would be furnished, but make no mistake; Appuldurcombe is a ruin, a shell of a house. Lest that sound negative, it isn't meant to be - the shell is superb, a beautiful example of an 18th-century stately home. Wandering the roofless rooms it is hard not to feel a sense of sadness and loss.

This must have been an extraordinary house, and now it seems lost in time, mouldering slowly away. The entrance hall, with its restored marble floor and Italianate columns, is a beautiful space, and you really do get a sense of just how beautiful Appuldurcombe must have been in its heyday.

In the grounds of Appuldurcombe is a falconry centre, and several of the estate outbuildings have been converted into holiday cottages. 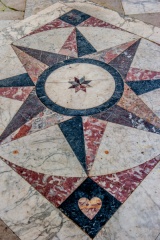 The marble floor in
the Drawing Room 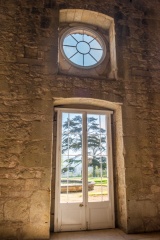 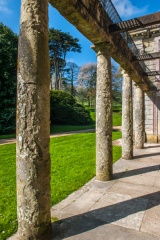 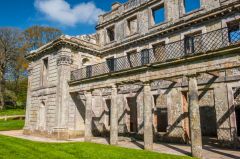 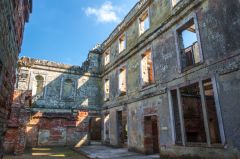 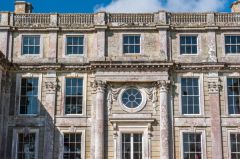 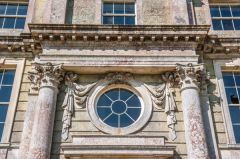 More self catering near Appuldurcombe House >> 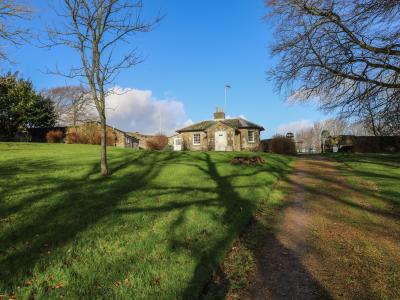 A ground floor, detached cottage based close to Wroxall on the Isle of Wight and sleeping two people in one bedroom.
Sleeps 2 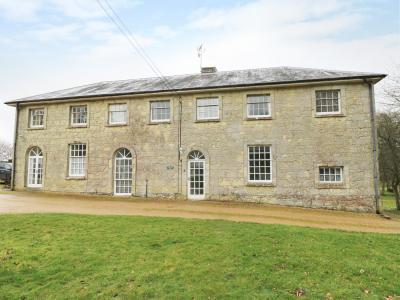 Part of a converted coach house in the Isle of White village of Wroxall, sleeping seven people in four bedrooms.
Sleeps 7