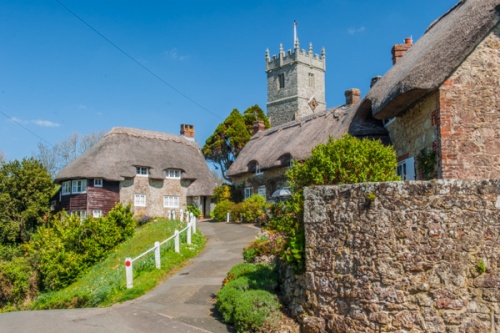 The earliest church at Godshill was built in the Saxon period, possibly during the reign of Edward the Confessor, but the current large building is almost entirely 14th-15th century, built by the monks of Sheen Priory. The hill on which the church stands, however, was the site of pagan worship long before Christianity reached the isle of Wight.

All Saints is the largest medieval church on the Isle of Wight, and one of the most visited and photographed parish churches in England. Part of that popularity rests with the treasure of All Saints, a wall painting showing Christ crucified, not on a wooden cross, but on a lily flower.

This Lily Cross, or, as it was known in earlier times, The Budding Cross, is painted on the east wall of the south transept. There are similar depictions in Europe, but this is the only 'Lily Cross' in Britain, and dates from the middle of the 15th century. During the Reformation, the painted was whitewashed several times - though whether to preserve it or destroy it we do not know.

It was only rediscovered in the 19th century and carefully cleaned, so that today the painting is remarkably clear and brightly coloured. Also in the south transept are several carved corbel heads and grotesque springers.

A tattered banner hanging from the wall belongs to the East Wight Volunteer Militia, raised when there was a real threat of invasion by the French under Napoleon. By the altar is a 17th-century parish chest and on the wall is a 16th-century painting of the Madonna and Child, made in Antwerp.

On the south side of the chancel arch, just under the rood beam, is a painted consecration cross with traces of medieval lettering still visible. 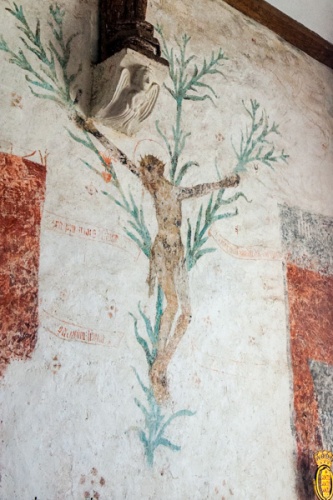 The chancel is a delight, with several fascinating historical features. Between the two altars is the Leigh Monument, with alabaster effigies of Sir John Leigh and his wife Agnes, of Appuldurcombe. Walk around to the rear of Sir John's effigy and you will see a pair of small 'weepers'; figures of monks with rosaries, set into the souls of his feet. This is almost certainly a medieval pun, with the monks attached to the 'sole' of Sir John's feet, praying for his 'soul'.

The Leigh's daughter Ann married into the Worsley family, and the church has numerous memorials and hatchments to future generations of Worsleys. Ann and her husband Sir James Worsley are commemorated by a monument on the north wall of the north chancel. The Worsley crest features a wyvern (a winged, two-legged dragon), and there is a wyvern on top of the flag pole surmounting the church tower.

In the south chancel is a poignant memorial to Sir Richard Worsley (d. 1565) and his two sons. The younger Worsleys died in 1569 when they were drying gunpowder, only to have it explode in their faces.

Near the Worsley monument is a 13th-century processional cross, and a piscina showing dogtooth carving which may have survived from the Saxon church on this site. Also in the south chancel is a 17th-century communion table, erected in 1631, with a Ten Commandments board of the same age on the wall above it.

The north transept was completely rebuilt in 1741 by Sir Robert Worsley, just to provide a suitable place for a grandiose monument to himself and his brother Henry, who served as Governor of Barbados.

Other historical highlights include the royal coat of arms over the door; this was made in 1707, the year that the Act of Union brought together Scotland and England, and shows the arms of England and Scotland impaled, as they are for a married couple.

Just outside the south porch is a sundial mounted on the stub of a medieval preaching cross. 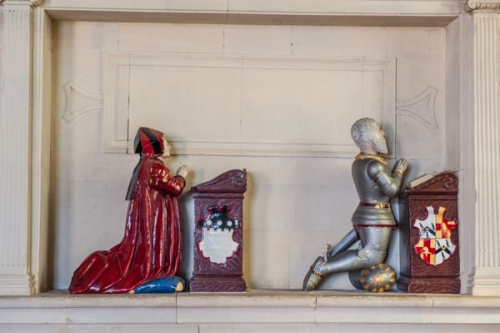 You can easily see why Godshill's church is photographed so often; the view towards the churchyard, past a cluster of thatched cottages, is a timeless vignette of idyllic English village life. The church is full of historic interest, and though many people will come to see the Lily Cross, there is much more. The Worsley family tombs are quite superb, and deserve a visit on their own.

The church is open every day but relies on volunteers to come and unlock the church. When we visited the volunteer must have been having a late cuppa, because it took a good half-hour after the church was supposed to be unlocked for them to arrive. But it was worth the wait; All Saints is a gem of a church, and well worth a visit. 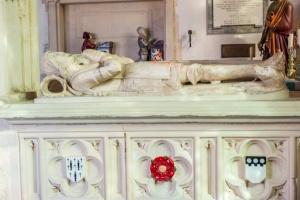 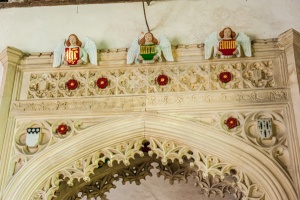 Decorated canopy of the Leigh memorial 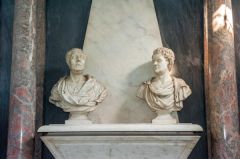 More self catering near Godshill

More bed and breakfasts near Godshill

Self Catering near Godshill