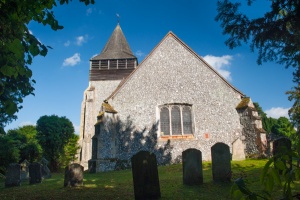 Standing in an exposed position beside the entrance to the National Trust's Clandon Park estate, the church of St Pete and St Paul must draw quite a few stares from visitors to on their way to the stately home. How many bother to take the short tree-lined path from the elegant historic house to the church? Those who do are rewarded by a fascinating historic building with its roots in the late Saxon period.

The timber Saxon church was rebuilt around 1180, resulting in the small church you see today. The north and south doorways are from the original Norman church, but the chancel was rebuilt around 1200 AD. The tower was probably added at the same time.

There are two piscinas in the south wall of the chancel, and a nicely carved single-seat sedilia beneath a moulded arch. Within the arch recess is hung a glass case with panels of painted wood which probably came from a rood screen or table behind the altar. The painted panels likely date to the late 13th century and show the saints Peter and Paul flanking St Thomas of Canterbury. 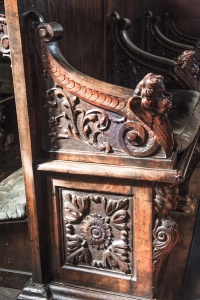 Against the west wall of the church is a wooden 'headboard' memorial to Alfred Lemon, aged only 14 at his death in 1851. The moving inscription says 'When musing sorrow weeps the past, How sweet to think of peace at last, And mourns the present pain, And feel that death is gain.' The Lemon memorial stood for many years in the churchyard until it was moved inside the church to preserve it. This style of wooden memorial was often used by families too poor to pay for a stone memorial that would stand up to the weather.

Opposite the Lemon memorial, on the north side of the nave, is the beautifully carved 17th-century pew of the Onslow family of Clandon Park. The pew is possibly Italian, with lovely carved armrests decorated with cherub heads and an ornate roundel on the headrest. Many of the pews in the west end of the church show very nicely carved bench ends. The wood was probably imported from Europe by the Onslows.

On the north wall is a lovely reminder of an ancient custom; two dole shelves hold twenty small loaves of bread. A wooden painted sign above the shelves explains their presence thus:

John Bone senior and Elizabeth his wife give to the poor widowers and widows belonging to the Parish of West Clandon 20 Sixpenny loaves on Christmas Day and 20 more the Sunday after Midsummer day and the Money to be Paid out of the House he now lives in that joins to Clandon Park and Lodge that was late at Rydes of Merrow. To be Paid by his Heirs and Assigns for ever. June 24, 1817.

The font is square, with tapering sides carved with interlinked arcade, supported on a central column. It is probably 12th century so likely to be original to the 1180 rebuilding, and the material is Sussex marble. The carving shows signs of damage, perhaps inflicted during the Reformation. The nave roof is 15th century (probably rebuilt in 1716), while the chancel roof is a century older.

According to local legend, a dragon once ramed the lanes of West Clandon. A soldier accused of desertion killed the dragon with the help of his dog, in exchange for a pardon. The story of the Clandon Dragon is recalled by a carving above the south door of the church. depicting a dragon and a reptile fighting.

West Clandon's church is not dramatic and has no compelling historical features, but it is a delightful country church, and is well worth a visit, especially if you are already visiting the stately home at Clandon Park. 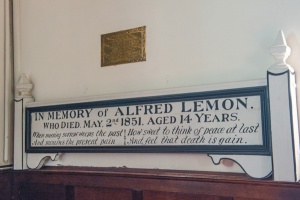 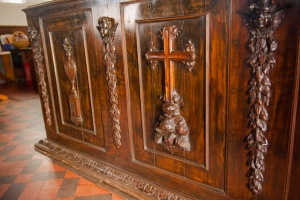 Carved pews, north-west of the nave 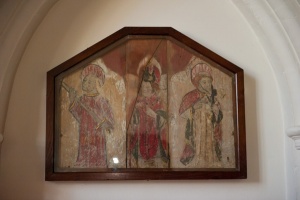 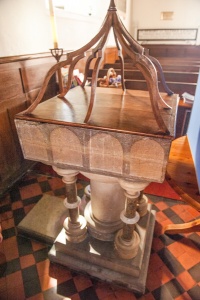 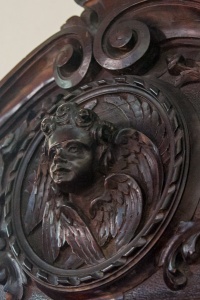 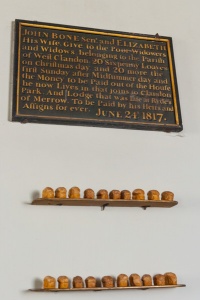 The Bone dole bequest
and loaves of bread 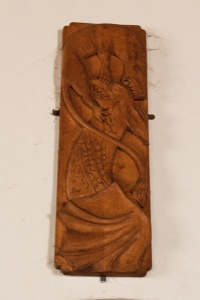 More self catering near West Clandon