HERITAGE HIGHLIGHTS:   The amazing Marble Hall and a unique (in Britain) Maori chapel 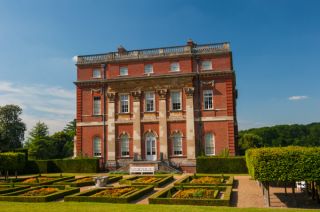 Clandon Park
Clandon Park is an 18th-century Palladian mansion built by Venetian architect Giacomo Leoni for the 2nd Lord Onslow. Clandon is surrounded by lovely gardens, with a formal parterre to the south. To the east is a Dutch garden and Maori House. The interior features an elegant two story Marble Hall, one of the finest rooms in England.

The history of Clandon is intertwined with the history of the Onslow family, who came from the borders of Wales near Shrewsbury. In the early 16th century, Roger Onslow decided to move his family from Shrewsbury to London, to make the most of their involvement in the wool trade. It was a shrewd move, and it allowed Roger's two sons, Fulke and Richard, to follow careers in politics.

Fulke did well for himself, rising through the profession of lawyer to become Clerk of the House of Commons. Richard went further; 'Black Onslow', as he was dubbed, became Speaker of the House under Elizabeth I. The 'Black Speaker' married well, something that the Onslow's seemed to manage quite often. He married Catherine Hardinge and moved his family out of London to Knoll, in Surrey. 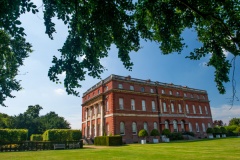 The house from the west (rear)

For generations the descendants of Black Onslow navigated the tricky political waters, skirting the law on occasion, and acquiring high office the way flowers attract bees. In 1641 Richard's descendant, another Richard, purchased the estate at Clandon, with its large Jacobean manor and 1,000 acres of land. Richard was a clever man, clever and ambitious. Oliver Cromwell dubbed him 'the red fox of Surrey' for his cunning nature.

Subsequent Onslows kept up the family practice of marrying into money. The 2nd Baron Onslow certainly did; he married a Jamaican heiress named Elizabeth Knight. The marriage certainly lined the Baron's pockets, but it did nothing for his new bride, who was said to be so unhappy in the union that her ghost still haunts the house.

No sooner had Baron Onslow managed to get his hands on his wife's money than he began to spend it. In 1731 he instructed the Venetian architect Giacomo Leoni to design a new house at Clandon to replace the earlier mansion. Leoni, also known for his design of Lyme Park in Cheshire, created a peculiar mix of rooms, some rather dark and ponderous, others ebullient and grandiose. 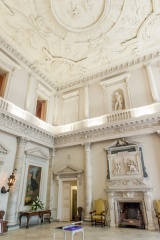 The highlight of any visit to Clandon is the astonishing Marble Hall, which must rival any of the great stately chambers in all of Britain. To walk into this huge space, elegantly decorated in shades of pale white and delicate plasterwork, is to feel an almost reverential awe, as if you've just entered a cathedral. And in some senses it is; a cathedral of classical style.

It seems that carved foliage decorates every surface, and classical creatures peer from the ceiling high above, and gods look down on mere mortals from the ceiling and the frieze that rings the chamber. The effect is quite simply stunning, not lessened by the chimneypiece sculpted by Antony Rysrack.

When at last you can bring yourself to leave the Hall you realise there's an entire house to explore still - and it's well worth exploring. The rooms are beautifully styled with stucco decoration, and bursting with a wonderful collection of porcelain and fine furniture gathered by Mrs Hannah Gubhay.

The furniture has no direct connection with Clandon; it was donated by Mrs Gubhay to the National Trust, who placed it here as much of the original furnishings at Clandon had been dispersed over the centuries. And it looks at home in the lovely Georgian chambers, as if it was made for the house. The porcelain is quite amazing, especially the collection of Oriental style birds. Among the impressive state rooms is the Speakers Room, named for its oversized portraits of the three family members who served as Speaker of the House of Commons. 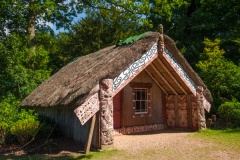 Immediately beside the house is a small formal garden of topiary and geometric paths, while to the front of the house, beyond an oversized Victorian entrance that seems rather out of place beside the Georgian frontage, is a wide green lawn and parkland sweeping away into far vistas.

On a slope above the house, with views to the formal gardens, is a grotto, for every 18th-century house with any pretensions to fashion simply had to have a grotto! From the grotto, you can peer down the slope to see the gabled roof of the Maori hinemihi peeking out from a clump of trees.

This eye-catching timber meeting house was a gift to the 4th Earl of Onslow, who served as Governor of New Zealand. This is not simply a decorative structure, it is is an authentic meeting house, and it used to stand in the village of Te Wairoa. In 1886 the village was destroyed by a disastrous volcanic eruption of Mount Tarawera. The villagers sheltered inside the meeting house, which, though covered in volcanic ash, was among the very few buildings to survive relatively unscathed. In 1892 the hinemihi was dug out of the volcanic debris and given to Baron Onslow, who had it shipped back to his family home at Clandon, where it is still used for services by the Maori community in England. 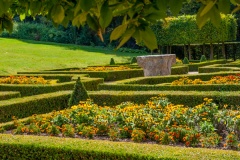 On a green terrace above the hinemihi is a series of huge neoclassical Doric column capitals, sprouting from the earth like gigantic mushrooms. There are four capitals, which must together make up some of the more unusual garden ornaments of any stately home I've visited in England!

A little further away from the house, and tucked away behind high hedges, is the sunken Dutch Garden. It is easy to miss the Dutch Garden. In fact, when the National Trust took over the Clandon estate in 1956 they did not realise the garden existed. That's not surprising when you consider that it lay hidden behind a yew hedge that had reached 30 feet in height and completely enveloped the garden.

It was not until a National Trust volunteer wandering about the estate stumbled upon the tangled thicket of hedge and wondered what lay beyond it that the garden was rediscovered. It took an enormous amount of time and effort to rescue the sunken garden from the tangle of weeds and the decay of decades, but it has now been restored to something approaching its original splendour. It's a lovely space, flanked by tall green hedges with a quiet pool at the centre; a peaceful place for putting your feet up and enjoying a quiet moment n a secluded green hideaway. The Dutch garden was created by Frances, Countess of Onslow, in the late Victorian period.

After you've explored the house and grounds I highly recommend taking a stroll up the shaded path to the tiny church of St Peter and St Paul. The church is located immediately outside the Clandon grounds, but is easily accessed through the estate and is well worth exploring for its medieval carved bench ends and Norman font.

On 29 April 2015, a devastating fire swept through the historic house, leaving it a roofless shell. The National Trust has begun an ambitious programme of restoration, and the public can see the process of restoration in action with access to some of the major rooms. Visitor access to the house is by timed ticket available at reception. 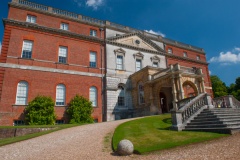 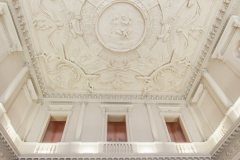 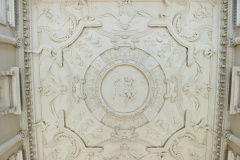 Ceiling of the Marble Hall 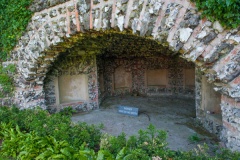 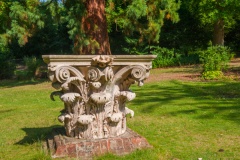 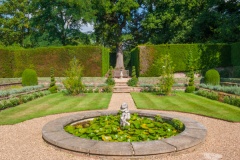 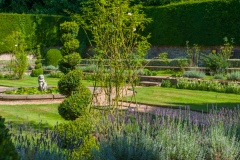 Another look at the Dutch Garden 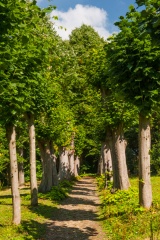 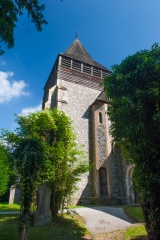 More self catering near Clandon Park >>