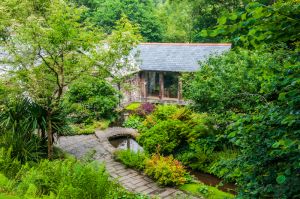 The history of a mill at Docton goes back to the early 10th century when the area was part of the royal manor of Harton. If that date is true, then there has been a mill at Docton for well over 1000 years. The mill was in production until 1910, grinding flour for the local Gifford bakery in Hartland.

When the mill ceased production it was converted into a private house. The mill wheel was also converted to produce electricity, as there was no national grid electricity to the area until 1950. The electrical generating capacity of the mill equipment is still in full working order.

The garden was designed around the old mill pools, watercourses, and leat (the channel funnelling water to the mill wheel). The first real attempt at developing a garden around the mill was begun in the 1930s but was allowed to become overgrown in the 1970s. The old mill was renovated in 1980 and the garden cleared, and hundreds of trees planted, a new bog garden created, and colourful borders planted.

Over the last few decades, the garden has grown, with very large herbaceous borders (over 140 metres long) adding colour, a woodland garden, and lovely magnolias among the newer features. There is a wildflower garden where nature is left to its own devices.

Spring brings out a beautiful display of bluebells, with primulas and camellias adding colour. Summer highlights include a profusion of roses and 25 different varieties of magnolia. There is a riverside walk where wild garlic fills the air with its scent, and bluebells abound in spring.

If you enjoy a good cream tea (and who doesn't) then Docton Mill is the place to come; the tea rooms have multiple awards as Best Tea Room in North Devon and Best Cream Tea in Devon.

We visited Docton Mill in late July when summer colours were at their best. The first thing to mention is how well-signed the Mill is. Even though Docton is located down a myriad of narrow, winding lanes, it was so well signposted that I never hesitated over which turning to take next. Other attractions can learn from Docton's example!

I really got the impression that the tea room is more of a focus at Docton than the garden. To get a garden ticket I had to flag down a waitress in the tea room first. She gave me a laminated garden map, which cost a 1 pound deposit on top of a very reasonable admission fee. I got back the deposit when I returned the map at the end of my visit.

The tea room was quite crowded, a sign of its popularity, and more people kept arriving throughout my visit. The tea room was located in a courtyard outside the historic mill building, which you can enter to see an exhibit about the amazingly long history of the mill, its restoration, and the creation of the garden.

You can see the mill wheel working, and see one of the old millstones used for grinding grain, set into the mill floor. From the mill a beautiful trail led beside the leat, shaded by drooping green branches.

It proved just as well that I had the map, for the paths twist and wind past a bog garden, then rise through attractive woodland before looping down to the leat once more. On the far side of the leat, below the mill, lies the bulk of the garden, with paths leading past an orchard and along lush borders bursting with summer colour.

The garden is not large, but the location is superb, and the secluded valley setting provides a home for a fascinating mix of colourful plants in a beautiful, historic setting. I enjoyed my visit immensely. 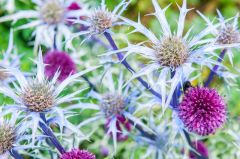 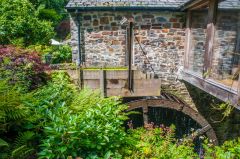 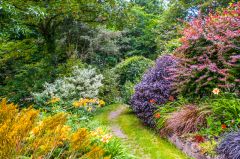 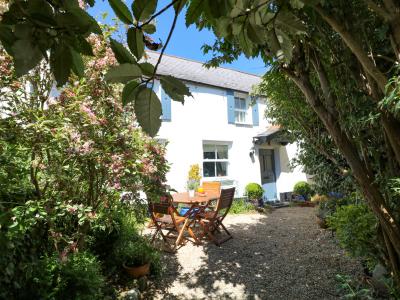 This beautiful cottage rests in the village of Hartland and can sleep six people in three bedrooms.
Sleeps 6 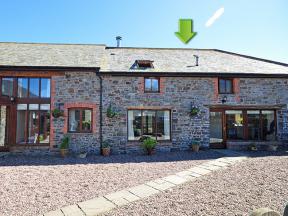 This luxury holiday home is set in 500 acres of farmland. The cottage is ideal for either enjoying the peace and quiet or as a base to see all that …
Sleeps 6