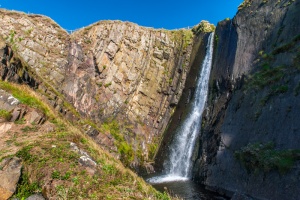 One of the most popular waterfalls in North Devon, Spekes Mill Mouth is located in a stunningly beautiful area of hanging valleys and high cliffs, where seabirds swoop and wildflowers flourish on the clifftops. Milford Water falls 48 metres in three steps, from the edge of the cliffs to the rocky beach below.

The walk begins at the second plateau car park at Hartland Quay, just west of Stoke village. From the car park the trail hugs the cliff before dropping down to a grassy ledge and skirting the base of St Catherine's Tor. Sheep graze at the foot of the Tor, but they must be used to walkers for they didn't even give me a stare as I walked through the flock.

From the Tor, the path climbs again until it reaches another grassy plateau above the falls. You can climb down a narrow track to the base of the falls, but this doesn't really give you a good look at the falls themselves. By far the most striking section of the waterfall is the top, or first step. For a better look follow the safety fence along the cliff edge to a gap in the fence where another well-worn path follows a small ridge until the top section of the falls comes into view. 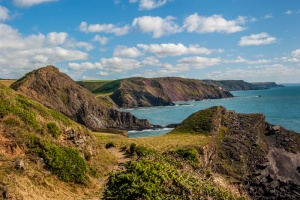 The waterfall is just the most known feature of this area; in truth, the real appeal comes from the magnificent coastal scenery and the stunning geography of the hanging valleys on this stretch of coastline. Spekes Valley is part of the North Devon Biosphere, an area of rare and beautiful lichens and abundant plant life. Butterflies and dragonflies abound in summer, and the air is filled with the cries of birds like wagtails, peregrine falcons, and buzzards. 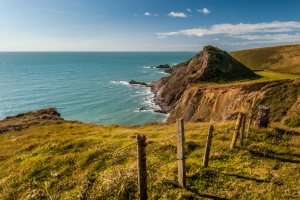 St Catherine's Tor from the south

Access is very simple; just park at Hartland Quay and follow the SWCP south along the coast, past St Catherine's Tor, until you reach a wide grassy area above the falls. I recommend parking at the free parking area on the plateau above the quay itself - between the Quay and the hotel.

There are no toilets or other facilities, but the parking area is directly on the trail, and there is an information panel showing the route. An Ordnance Survey map is handy, but not at all necessary, as the trail is very well signposted and well-used, so there's no possibility of getting lost.

The waterfall is much closer to Kernstone Farm than to Hartland Quay, but access from the Quay parking area is simpler and is by far the most popular route. It also has the advantage of being directly on the South West Coast Path and there is a SWCP information panel at the car park which clearly shows the path and what to see along the way.

A reasonably fit person can make the walk in about 20 minutes one way - or 30 if you stop to take photos every few steps like I do! The walk can easily be extended to create a longer circular walk, or simply as part of exploring the SWCP.

For an added extra, you can follow the SWCP north from the Hartland Quay car park, to an eye-catching folly in the shape of a ruined medieval castle on top of the cliffs. The 'castle' (marked as 'Tower' on Ordnance Survey maps) was built for the owners of Hartland Abbey, which is just visible in the valley below.

The castle is extremely easy to reach, taking no more than 5 minutes of fairly level walking from the Hartland Hotel, and is directly on the coast path. From the hilltop you can also see the very prominent landmark of the church tower in Stoke village.

Given the height of the tower and how easy it is to spot from the clifftop, you can appreciate why the church gained the moniker 'The Cathedral of North Devon'. 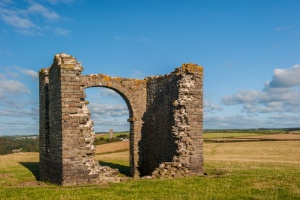 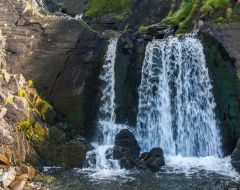 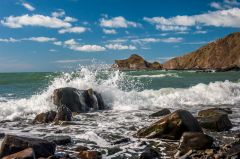 Self Catering near Hartland