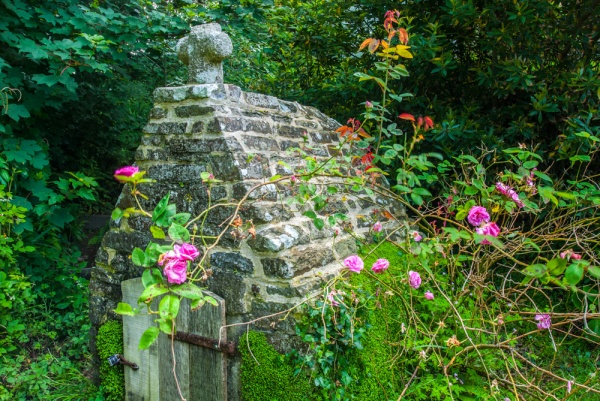 In the grounds of the historic vicarage in Morwenstow, north Cornwall, stands a medieval well house protecting an ancient holy well dedicated to St John. Water from the holy well has been used for baptisms in the nearby church of St Morwenna and St John for centuries.

Though the vicarage is private, there is public access to the holy well just off the drive.

How old is it?
We don't know for certain, but the well was mentioned in a 1296 document. It seems likely it was in use long before that time.

The vicarage was home to the Victorian cleric and poet Rev. RS Hawker. The word 'eccentric' must have been invented to describe Rev. Hawker, who wrote poetry in a hut made of driftwood built into the steep cliffs outside the churchyard. One of his poems was called 'The Well of St John', where he says:

A spring of silent waters with his name,
That from the angel’s voice in music came

Hawker was involved in a contentious court case centred on St John's Well. It seems that in 1843 Sir John Yarde Buller claimed the well and the ground it stood on. Hawker refused to yield, and the case went to the Assizes in Bodmin, where the hearing took two whole days.

The court found in the Church's favour, and Buller was forced to pay 1370 pounds court costs, a huge amount at the time. It is just as well that Hawker won his case, for the holy well provided water to the vicarage. It still does to this day, through a gravity-fed system. The church still has the right to draw water from the well for baptisms.

You can see a depiction of the well in Rev. Hawker's memorial window in the church, where the poet cleric is shown standing with his dog beside the well head.

According to 'Ancient and holy wells of Cornwall', 1894, Rev. Hawker considered the water from St John's Well so pure that he would drink no other.

To the west of the church, partway down the cliff face, is a second holy well, dedicated to St Morwenna, also protected by a medieval well head structure. The last time we checked there was no public access to St Morwenna's holy well, but thankfully it is quite easy to reach St John's well.

The well is signposted just outside the churchyard. Just head down the drive to the vicarage and you will see it peering out of the foliage on your left. It is a very picturesque setting, with roses growing around the door. The ground is quite damp near the well entrance, so its a good idea to wear good waterproof footwear.