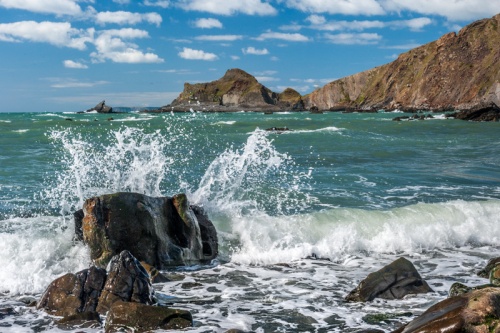 In a tragic accident during the training, over 800 soldiers lost their lives at sea off Hartland Quay, and their memory is preserved in a memorial column erected by the US at the north end of the beach.

A path leads inland from the beach to Hartland Abbey, a Georgian manor house built upon the foundations of a 12th-century Augustinian monastery. 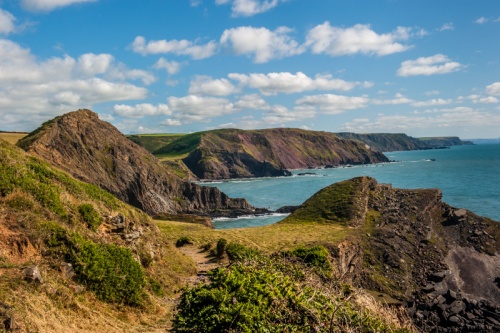 Inland of the shingle is the wetland nature reserve of Hartland Quay Ley, the largest natural freshwater lake in the west of England. The Hartland Quay Ley Field Studies Centre manages the nature reserve and provides a venue to study and preserve the wetland environment of the Ley. The Ley is a haven for birdwatchers, and for those who simply enjoy lovely countryside walks along this stretch of coastline.

A short walk south along the coastal path brings you to Spekes Mill Mouth, a spectacular waterfall spilling down from the heights of a hanging valley.

Inland of the Quay is Stoke village, a pleasing mix of older cottages grouped about winding lanes, and newer houses looking out over the sea. There are several restaurants, shops, and pubs, including the Tower Inn, which sits cosily beneath the striking ruins of a tall, square tower, a folly built in medieval style for the owners of Hartland Abbey.

The tower, known as Castle Folly, recalls the presence of a medieval college of priests that once stood at Hartland. The remainder of the college buildings were destroyed in the Dissolution of the Monasteries, but the tower remains to add a touch of history to this quiet corner of Devon.

About Hartland Quay
Address: Stoke, Devon, England
Attraction Type: Countryside
Location: At the end of a country lane past Stoke village. Paid parking at the end of the lane.
Location map
OS: SS223245

More self catering near Hartland Quay