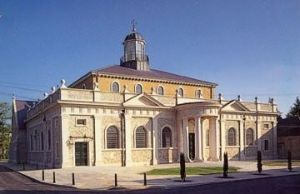 Brentwood Cathedral
The Cathedral Church of SS Mary and Helen in Brentwood is a modern Roman Catholic cathedral designed by architect Quinlan Terry in the style of the early Italian Renaissance, tempered by the English Baroque influence of Sir Christopher Wren. The structure also retains part of an 1861 Gothic revival church originally on this spot.

In 1837 William Petre, Lord Petre, gave money to build a Roman Catholic church on Ingrave Road in Brentford. In 1861 the church became a school, and a new, larger church was built on land given by Petre's son, the new Lord Petre.

Following the aesthetic fashions of the times, this church, dedicated to St Helen, was built in Gothic Revival style. St Helens was not designed as a cathedral, but as a relatively small parish church, but then in 1917, it was raised to full cathedral status.

In 1981 the decision was made to create a much larger and more ornate building, incorporating the 1861 church. The location in Brentwood's conservation area called for a sensitive touch, creating a building in tune with the historic buildings nearby.

Architect Quinlan Terry designed a building combining Italian Renaissance style with Sir Christopher Wren's English Baroque. The building was designed as a square, with the high altar centred in the nave.

The most striking exterior facade was the north face, where a semi-circular portico is flanked by Doric columns and rises up to an octagonal lantern. The interior is lit by round windows in the style of Wren, with hand-made clear glass flooding the interior with light and reflecting off white-coloured walls. Additional lighting is provided by classical chandeliers.

The interior decoration is restrained, but there are some definite highlights, including the bishop's cathedra, or chair, made in Pisa of Nabrassina stone, and set on a base of Portland stone. Around the nave arcade are terracotta roundels representing the stations of the cross. The roundels were designed by Raphael Maklouf, perhaps most famous for designing the likeness of Queen Elizabeth II that was used on all Commonwealth coins from 1985-97.

Work on the new Brentwood Cathedral began in 1989 and the building was dedicated by Cardinal Hume in May 1991. The cathedral is known for its choir, which is often recorded and goes on regular tours overseas.

It is interesting to see a relatively modern building that incorporates so beautifully several styles of historic architecture in one building.

More self catering near Brentwood Cathedral >>