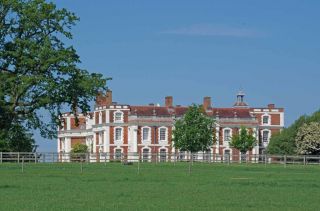 Hill Hall
Hill Hall is a magnificent Elizabethan mansion, showcasing some of the earliest examples of Renaissance style in England. Of particular interest are two excellent sets of wall paintings, with a mix of classical and Biblical subject matter. The paintings have been called the best Elizabethan figure paintings in England.

The house was built for Sir Thomas Smith between 1569-75 to replace a 12th-century house on the same site. Smith was a high-flying courtier at the court of Elizabeth I and served as an ambassador to France. The building is surrounded by 50 hectares of parkland designed by Humphrey Repton.

The Smith family owned Hill Hall until the Victorian period. It passed through several owners and was used as a prisoner of war camp during WWII. Pregnant women were also evacuated to safety here from wartime London and several babies were born at Hill Hall.

The house was used as a women's prison in the 1960s and 70s. The most famous inmate was Christine Keeler, the woman at the heart of the Profumo scandal that rocked British politics in 1961.

The house was badly damaged by fire in 1969 but has since been restored. Hill Hall is divided into private flats, but the parts featuring the classically-inspired Tudor wall paintings are open to visitors for regular guided tours.

Several ghost stories involve Hill Hall. According to one tale, during the Georgian period a daughter of the house fell in love with a man that her seven brothers thought was an unsuitable match. One by one the brothers fought duels with the suitor and one by one they died. After all seven brothers were killed, their sister committed suicide out of remorse. Her spirit is said to haunt the house to this day.

Other stories tell of a spectral horse and carriage and a phantom black hound.

It might be easy to dismiss the stories as old folk tales, but during WWII when Hill Hall was occupied by the military, several officers - unbeknownst to each other - refused to sleep in one particular bedroom off the great hall more than one night after experiencing a ghostly presence that they could not explain.

More self catering near Hill Hall >>