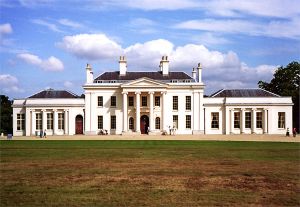 The history of Highlands begins in 1726 when a wealthy lawyer named Sir John Comyns bought the manor of Shaxstones. There was already a house in the estate, but Comyns had grander notions. He had a new home built, a showpiece that would express his status and wealth. The red-brick house was finished in 1730 in the fashionable Queen Anne style, with grounds laid out in a formal geometric design.

The house passed through the Comyns family until it was purchased by Cornelius Kortright in 1797. Kortright called upon architect and garden designer Humphry Repton to create a new landscape garden, replacing the earlier formal gardens. Before Kortright could set about redesigning the house he decided his growing family needed larger premises, so he sold the estate.

The house passed in 1939 to a rising ironworks entrepreneur and MP named John Attwood. Atwood had his sights set on gaining a peerage and decided that the house wasn't sufficiently impressive to reflect his ambitions. He enlarged the house yet again and expanded the grounds. He also had the route passing through the estate from Writtle declared a private road.

From 1904 the house was owned by Sir Daniel Gooch, who lived the life of an Edwardian country gentleman. Gooch was part of the Shackleton polar expedition but had to return home with frostbite before the final assault on the South Pole. Then during WWI, the house was requisitioned as a military hospital. In the Second World War, the SAS had their headquarters here, and the grounds were used as a POW camp.

When the final owner died in 1962 the Hylands estate was purchased by the Chelmsford Borough Council, who restored the house and grounds and opened both to the public.

The spectacular house interiors include a grand staircase designed by Humphry Repton, a luxurious Banqueting Room, a gloriously gilded Drawing Room, and a 'below stairs' glimpse into the wine cellars and butler's pantry. Then there are the historic gardens, with formal garden areas near the house and 18th century landscaped gardens further afield.

The house and grounds have limited opening hours so it is well worth checking with the official website before making plans to visit.

Hylands is a hidden gem, often overlooked by visitors in favour of privately owned stately homes, but it is well worth a visit.

More self catering near Hylands House >>