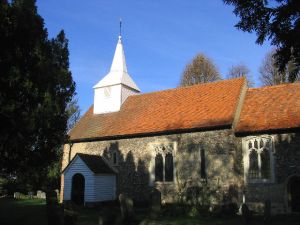 There are Roman brick fragments in the nave walls and quoins, and in the window dressings. The church is composed of a nave with a 15th-century chancel, with a clapboard bell turret and south porch. At the west end is a bell turret supported on 15th-century posts, and one of the bells may date to the 14th century.

The nave is 12th century, and there are 12th-century windows and doors, though some windows were rebuilt in the 13th and 15th centuries. The north door has some very nice original 12th-century ironwork.

The oldest feature of the interior is a 14th-century font. Within the church are some interesting memorials, including a pair of memorial brasses dated 1614, to the memory of two infant children of the rector.

St Andrew's is no longer used for regular worship and is now in the care of the Churches Conservation Trust.