HERITAGE HIGHLIGHTS:   The oldest wooden church in the world and possibly the oldest timber building in Europe 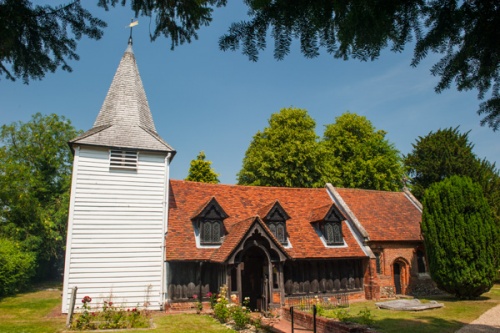 The simple country church in the Essex village of Greensted-juxta-Ongar is a remarkable Saxon survivor; built of timber shortly before the Norman invasion, it is the oldest wooden church in the world and the oldest timber building in Europe. 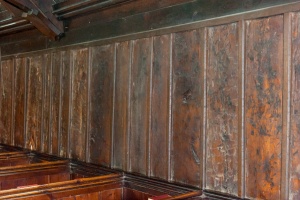 It is hard to imagine a much simpler building than St Andrew's church. It is composed of a rectangular nave with a small east chancel, and a wooden tower at the west end of the nave. The chancel was rebuilt in brick in the 16th century, and it is actually quite lovely, especially from the outside.

But it is the nave that draws the attention of visitors from around the world, and rightly so. The nave is built of upright logs, split vertically as in Scandinavian stave construction, and placed side by side, with a groove down the centre and a thin fillet of wood inserted to make a weatherproof seal.

The logs originally stood upon a timber sill, but this was replaced by a sill of mixed timber and bricks during a Victorian restoration. Fifty-one logs were split to make the nave walls, with tenons at the bottom that fit into a slot in the wooden sill. The top of the logs originally fit into a groove on a horizontal wall plate and were fixed with wooden pegs. in the north wall you can see a small eye-hole.

The north-west corner is worth a look; the corner was made from a single upright log with a quarter section removed to form the interior angle of the nave. The west wall was originally made from tall single logs reaching from the ground to the gable. Only one of these logs is still complete and unrestored.

The origin of Greensted Church

When we visited we met a local volunteer engaged in tidying up the church. He regaled us with stories of the early history of the church and its builders, and Greensted's association with the Tolpuddle Martyrs.

One amusing story deserves to be related here. It seems that there are several very old churches in Scandinavia - Sweden and Denmark, he recalled, and these churches scoffed at the idea that Greensted's church might predate them.

So a team of academics from a Scandinavian university asked for permission to test the timbers at Greensted and establish an accurate date using current technology. The Greensted community agreed and the academics took their timber samples and whisked them away to a laboratory for analysis.

One can only imagine with what chagrin they then had to admit in a formal letter to the Greensted vicar that indeed, Greensted predated all of their churches, and was founded sometime around 1050-1060.

That date is much later than the 8th or 9th-century dates traditionally used to describe St Andrew's, but it still makes Greensted's pride the oldest wooden church in the world. 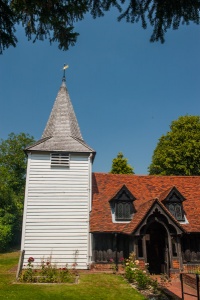 There is evidence that the current wooden church is the second, or perhaps the third to stand on this site. It is possible that the earliest church was founded by St Cedd, who was responsible for establishing numerous churches in this area in the 7th century.

Cedd was a missionary trained at Lindisfarne, who established a base at Bradwell-on-Sea, where a very early Saxon church still stands on the site of a Roman fort. Excavations under the chancel floor in 1960 revealed evidence of two simple wooden buildings dating the late 6th or early 7th century. These buildings were constructed by simply dropping upright timbers into a trench.

We know that there was probably a church in existence in 1013, when the body of King Edmund, the first patron saint of England, rested here while being transported to Bury St Edmunds for reburial. An alternative interpretation is that the current church was built on the spot where St Edmund's body rested.

So now we have at least 3 possible dates for the church foundation. It is intriguing to think that there were probably many similar churches to Greensted in the late Saxon era, but all of them were rebuilt in stone. All except this one. Why did it survive relatively untouched while other churches were rebuilt in more resilient stone? We can only wonder. 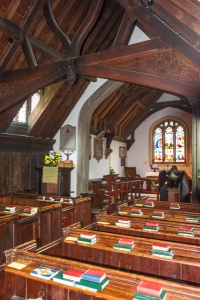 Around 1060 the nave was added to the earlier wooden chancel. The nave had no windows, so it must have been a dark and mysterious place, but it probably represented an enormous leap forward from the 7th-century church! A few eye-holes pierced the walls, letting in dim light.

The interior was probably illuminated with oil lamps, and some of the nave timbers show dark areas which may well be scorch marks from the lamps. During the Norman period the chancel was rebuilt in flint.

The chancel was rebuilt again in the 16th century when both nave and chancel were given a tiled roof. Yet throughout the medieval and Tudor periods the nave remained intact, its wooden construction remarkably unaltered.

The church was altered in the early Victorian period, when the then rector, Philip Ray, called in a local woodworker named James Barlow to perform essential repairs to the now-decrepit structure. Barlow certainly did repair the building; some critics claimed he was over-zealous in replacing original materials.

It was he who carved the spandrels, including the likeness of St Edmund, and crafted the eagle lectern. Plaster was removed from the timbers, six dormer windows inserted, and the wooden porch added.

Vicar Ray, to his credit, carefully catalogued the Saxon joinery, and made drawings of the construction techniques. Ray is buried in the churchyard, his final resting place surrounded by iron railings. Also in the graveyard is the memorial to Edward Edwards, a local innkeeper who died in 1842 after injuries sustained using a scythe, trying to win a bet made during a drinking bout. 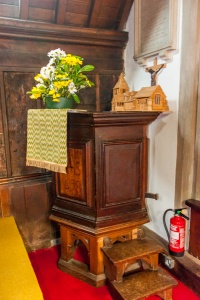 Just outside the south porch is a much worn grave slab, protected by an iron railing. The slab is decorated with a floriated cross and is said to be that of a 12th-century archer from the area who went on one of the Crusades. The fact that the grave is of stone - not a material readily available locally - and that the grave is close to the south wall, suggest that the deceased was seen as a hero by the local inhabitants.

Obviously, the most interesting highlight is the actual timber construction. This is truly unlike anything I have ever seen in an English church. You can clearly see the marks made by an adze on the flat side of the nave timbers. The interior is also quite dark, as there are only a couple of small dormer windows in the nave roof to admit light into the interior.

Look up and you will see, on the first cross-beam from the west end, a fascinating carving of St Edmund. Beneath this is the font, completely of wood, but of modern date. At the north-east corner of the nave is a lovely late 17th-century pulpit, given by Alexander Cleeve, lord of Greensted Manor and a wealthy London pewterer.

Behind the pulpit is a scale model of the church, made - naturally - entirely of wood. The real interest in the chancel is the Bible and prayer book on the altar. Both these are bound with wooden slabs from a roof beam. 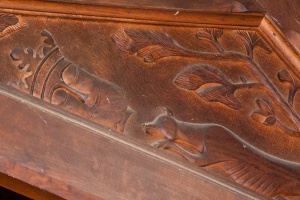 While we are uncertain of the exact date of the church foundation, we are on much firmer ground with its ties to the Tolpuddle Martyrs, a group of early 19th-century trade union activists from Dorset who were deported to Australia for daring to band together to ask for a decent living wage.

Such was the public outcry against their ill-treatment that the Martyrs were brought back from Australia and granted farm tenancies in High Laver and Greensted.

Several of the Martyr's worshipped at St Andrew's, and in 1839 one of them, James Brine, married Elizabeth Standfield, daughter of another of the Martyrs, in a ceremony at Greensted church. The marriage register recording the event can be seen in the church.

Because of its ties with the Tolpuddle Martyrs, Greensted is a popular destination for people interested in the history of trade unionism, and there are strong ties between Greensted and the Martyr's museum in Tolpuddle.

Note:
You'll see the name of the village listed sometimes as Greensted-juxta-Ongar, but it is generally known simply as Greensted. 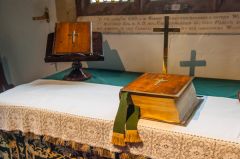 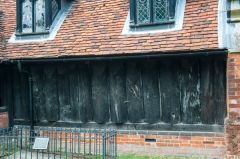 More self catering near Greensted

More bed and breakfasts near Greensted