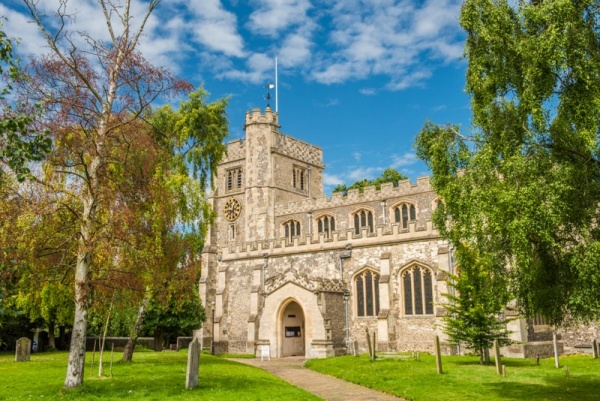 There was a church recorded at Tring in the Domesday Book of 1086 but most of the attractive building we see today is a product of the 15th century. Immediately behind the churchyard is Sutton Court, a neo-Tudor building erected in 1825 as the vicarage, but now a private dwelling.

The church was rebuilt in the 13th century and the first mention of a rector comes from the year 1214. That 13th-century building was enlarged in the 14th century when the striking west tower with its external stair turret was built. The nave, south porch, south aisle, clerestory and chancel are all products of the 15th century.

As you enter the church by way of the 15th-century porch you find yourself facing the most impressive monument in the church; the striking memorial to Sir William Gore of Tring Park and his wife Elizabeth. Gore was Lord Mayor of London and a successful statesman until he was forced from office on charges of corruption. 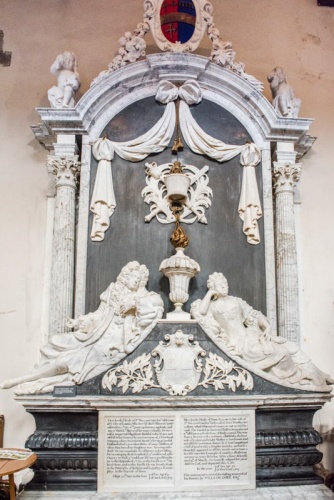 The monument is traditionally said to be the work of master carver Grinling Gibbons. Notice Sir William's right thumb. It was broken off the sculpture and lost for many years until it was rediscovered 100 years later in a nearby pond.

On one side of Sir William's memorial is a wall monument to John Gore, his grandson.

In the north aisle is another wall monument, to Edward Pope, a 19th-century doctor who lived and worked in Tring for 60 years.

On the floor in front of the Gore memorial is a medieval coffin slab thought to be 700 years old. It is decorated with a floriated cross and a pair of scrolls that resemble hinges.

Obscured by the altar are 17th-century floor slabs to members of the Anderson family, including Sir Richard Anderson, who died in 1632. In the north aisle is a marble and stone wall tablet to Mary Anderson (d 1638).

The nave roof is supported on 14 stone corbels, each carved with a unique design. One shows a monkey dressed as a monk, another shows a gryphon eating a knight in armour. Another corbel depicts a dog doing battle with a dragon, and another shows a wild man wearing a trailing vine. One odd corbel depicts an antelope with tusks and another is a likeness of a grotesque creature that is half woman, half dragon. 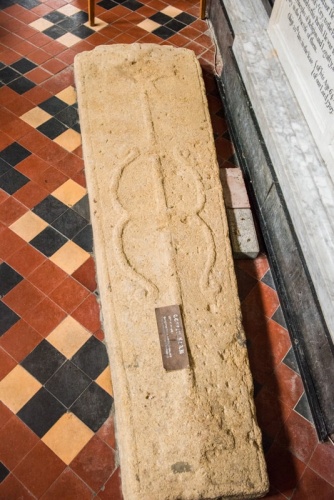 Tring receives a regular stream of American visitors, many drawn by the links between the area and America's first president George Washington. From 1630-1650 Lawrence Washington, George's great-grandfather, lived in Tring and his great-great grandmother Amphillis (nee Twigden) was born here. Amphillis was married to Reverend Lawrence, the rector of Trin Church.

St Peter & St Paul's boasts a wonderful collection of late Victorian stained glass, set in late medieval windows. Perhaps most impressive is the east window, designed by the famous London firm of Clayton & Bell and installed in 1851. Clayton & Bell were also responsible for the south window in the chancel and the west window in the nave. Several other windows are by CE Kempe - look for Kempe's trademark wheatsheaf symbol.

At the west end of the nave is a richly carved late-Victorian screen designed by GS Bodley.

The chancel highlight is an ornate reredos, designed by FE Howard in 1928. The reredos is divided into 5 panels, with the central panel depicting the Crucifixion and the flanking panels showing scenes from the life of Christ. 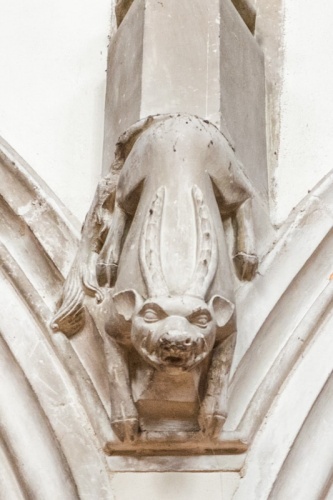 15th-century corbel of an antelope with tusks

During restoration work from 1850-60 a series of stunning medieval tiles were uncovered. The tiles were crafted around 1320 and are in the form of 'sgraffito', a style of decorative artwork on ceramic surfaces that look similar to a medieval illuminated manuscript.

The tiles were in astonishingly good condition, suggesting that they were never intended to be walked on but instead set upon the chancel wall as decoration.

The Tring Tiles were removed from the church in mysterious circumstances and only discovered years later in a local curiosity shop. A Reverend Owen bought the tiles, though he could never get the shopkeeper to confess where he had obtained them.

When Reverend Owen died in 1922 the tiles were sold as part of his household effects and purchased by an antique dealer for £17. The dealer had the tiles auctioned off by Sotheby's and they were purchased by the British Museum for £1,420 - quite a tidy profit for the dealer.

Most of the Tring Tiles are now in the British Museum in London, though two pieces are on display at the Victoria and Albert Museum. 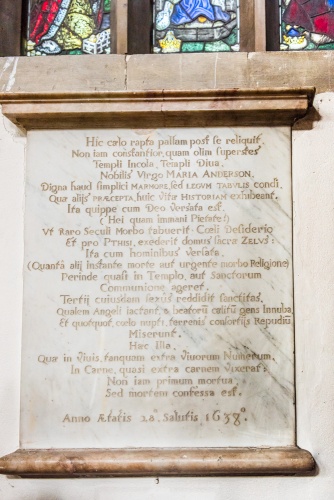 Thirteen less highly decorated tiles are still in the church and can be seen in a special display case in the Emmie Hobbs room. These tiles, which show geometric patterns and floral designs, were made by the same craftsman in the Buckinghamshire village of Penn and date to the late 14th century.

As you leave the church take a moment to walk around the exterior of the west tower. Flanking the west door are carved heads representing Cardinal Beaufort, Bishop of Lincoln at the time the tower was built in the 13th century, and on the other side is a likeness of Bishop Claughton of St Albans, diocesan bishop at the time the tower was restored in the 19th century.

St Peter & St Paul is easy to find. It stands on High Street just a short stroll west of Tring's public car park. The church is usually open daylight hours and was open when we visited. 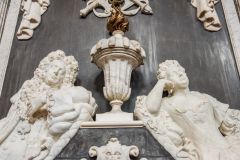 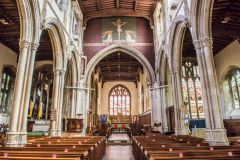 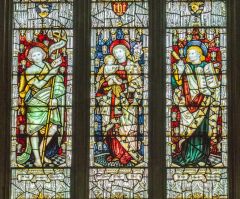 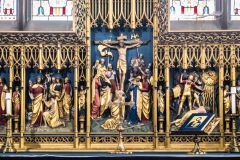