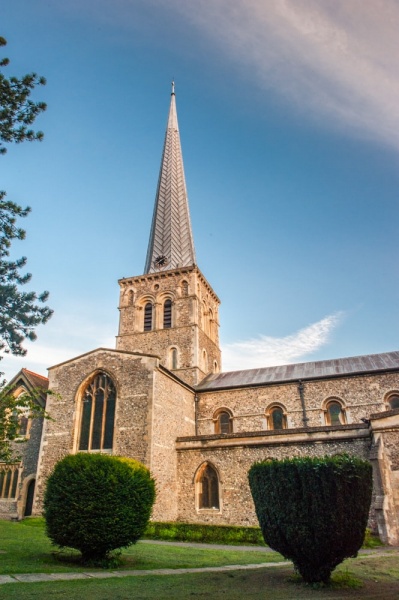 The striking spire of St Mary's Church is a Hemel Hempstead landmark, visible over the historic Old Town and the green fields of Gadebridge Park. The church was begun around 1140 and was officially dedicated a decade later in 1150, though construction carried on for another 30 years.

The original church layout was composed of a nave, transepts, tower, and a chancel, the first part of the church to be completed. In the 14th century, the striking spire was added atop the tower. The spire is one of the tallest in Europe and reaches 200 feet above the ground. It is topped with a gilded weather vane.

The church was built with a combination of local clunch mixed with flint and some Roman bricks. Porches were added in the 14th and 15th centuries and a vestry in the Victorian period. 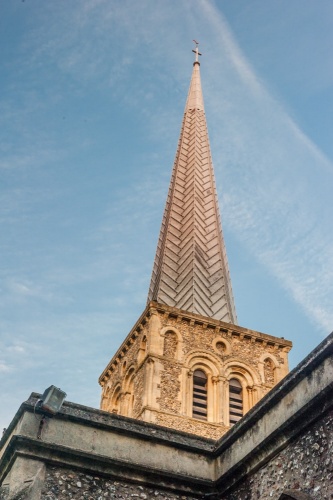 In 1302 Ashridge Priory established a cell of monks beside the church, which gained collegiate status. The monks had a separate door in the base of the tower which allowed them to enter and leave the church without having to mix with the ordinary townsfolk.

What is really curious about St Mary's is its size. When it was constructed in the middle of the 12th century Hemel Hempstead was nothing more than a hamlet, not the bust town it is today. Why did such a small settlement need such a large parish church? 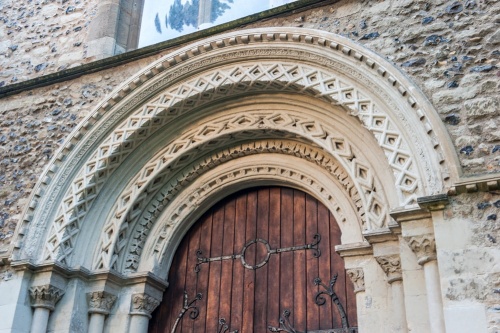 Within the church is what appears to be a Norman parish chest, though the informative church guide admits that it may be a Tudor replica in Norman style.

Against the west wall is a pair of memorial brasses, depicting Robert Albyn and his wife Margaret. The brasses originally formed part of a 14th-century table tomb and are thought to date to 1360. Robert's feet rest on a lion while Elizabeth's head lies on a cushion while a dog lies at her feet.

The font is a bit of a conundrum. It consists of a square bowl atop a cylindrical stem with a moulded base. The bowl appears to be Norman but it is carved with 19th-century depictions of Biblical figures. 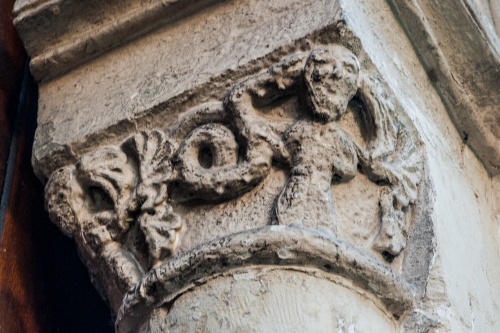 The chancel boasts a 12th-century vaulted stone roof, built around 1150, but most of the furnishings are Victorian, including oak choir stalls with ornate neo-Gothic carvings. On the north wall is a royal coat of arms to George III, dated 1767. Below the coat of arms are the names of the two churchwardens in that year.

Behind the high altar is a richly decorated reredos thought to have been made in Oberammergau. On the south wall is a medieval piscina under a pointed arch.

Most of the stained glass is Victorian, including a memorial window to Henry Day, Esq. Among the monuments is a wall plaque to Sir Astley Paston Cooper, Bart., who died in 1841.

The churchyard is intriguing; it was cleared of gravestones in the late Victorian period, with many of the older stones propped against the churchyard wall. 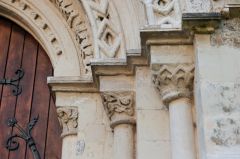 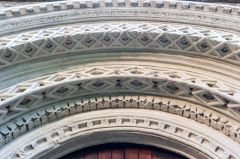