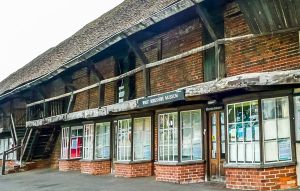 West Berkshire Museum
This local museum is housed in two of the most historic buildings in Newbury, the Jacobean Cloth Hall and the Granary, which dates to the early 18th century. There is a fascinating mix of local and worldwide exhibits, divided into 10 galleries.

The Cloth Hall was built from 1624 by the Newbury Corporation to act as a cloth factory. The builder was Richard Emes, a master carpenter from nearby Speenhamland. The building we see today was part of a larger complex, arranged around a central courtyard.

The hall was later converted for use as a workhouse, a hospital, a school, and a corn storehouse before it became home to the West Berkshire Museum in 1904. The museum had already been collecting since 1840 under the guise of the Newbury Literary and Scientific Institute.

Among the galleries are those devoted to the locally produced Newbury Coat, Hot Air Ballooning, the English Civil War, and the Kennet and Avon Canal. See displays on the social history of the Newbury area, fine art, weapons and warfare, and local archaeology.

To say that the museum collections are varied is an understatement; fro a Stone Age Axe to a grandfather clock, if it has to do with West Berkshire heritage, you'll find it here.

Displays change frequently so that you never really know what you'll see. The museum also collects objects from people's everyday lives now, since those items will be the museum artefacts of tomorrow.

An important part of the museum is the historic museum buildings themselves; learn the stories of these Newbury landmarks and how they were used over the centuries. A special 'Discover' area holds books, maps, and other documents about Newbury and its heritage.