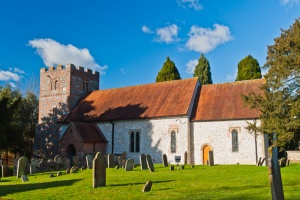 A simple country church, at first glance St Andrew's appears to be composed of a 13th-century nave and chancel, with the addition of a 15th century west tower. But appearances are sometimes deceiving, and in the case of Boxford's church, this is certainly true. For if you walk around the east end of the church, to the hidden north all, you will find a distinctive Saxon window, narrow and deeply set in the surrounding stonework, with a rounded arch.

This window is, unusually, framed in oak, and still has its original wooden shutter. This is thought to be the oldest working wooden window in the UK and only came to light during renovations in 2010, when the Victorian rendering was stripped away. 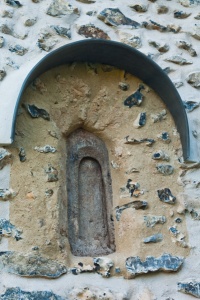 There is further evidence of Saxon origins in the long and short quoins of the chancel, a traditional method used by Saxon builders. Given the existence of the Saxon window, it seems plausible to suggest that St Andrew's was erected by the monks of Abingdon Abbey in the 10th or 11th century.

Within the church are a pair of fonts, the oldest dating to the 17th century and the more modern to the early20th century. Also from the 17th century is a small carved wooden chest, and a beautifully carved Jacobean pulpit with a sounding board to amplify the vicar's voice.

There is an amusing story attached to the west tower. It seems that in the mid 17th century the rector and Oliver Sanson, a well-to-do Quaker, were at odds over Sanson's tithing practice - or lack of it. The 15th century fell down in 1657 and much of the stonework fell into the garden of Sanson's home beside the church.

Sanson refused to let the vicar retrieve the stones, reportedly saying 'As God has sent them to me, no man shall take them away.' It was fully 30 years before the tower could be rebuilt. High drama in a small village! 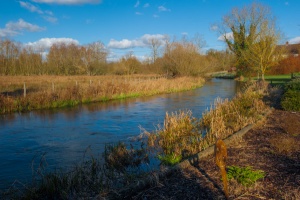 Behind the church, in a lovely location beside the river, is the Peace Garden, a beautiful green oasis created Boxford's residents. It's a lovely spot to sit on a sunny day and watch the river float past.

Unfortunately, this attractive church is usually kept locked. The church website suggests calling the verger and gives a phone number, so it may be best to plan a trip well ahead and prearrange to pick up the key.

More self catering near Boxford

More bed and breakfasts near Boxford