HERITAGE HIGHLIGHTS:   One of the least altered examples of an Elizabethan manor house in England 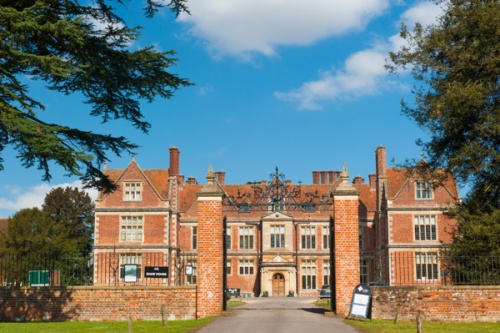 One of the best-preserved Elizabethan manors in England, Shaw House was built in 1581 by a wealthy cloth merchant named Thomas Dolman. Over the ensuing centuries, it welcomed royalty and was at the centre of a major Civil War battle.

In the early 16th century, a Yorkshireman named William Dolman moved his family south to Newbury and worked as a manager for a wealthy clothier named John Winchcombe. His son Thomas was even more successful and made a small fortune in the cloth industry.

Thomas had social ambitions; it seems that his aim was to climb the social ladder, and this he certainly succeeded. He decided to put his wealth into acquiring property, and one of his purchases was an estate at Shaw, on the north side of the River Lambourn opposite Newbury.

Either by sheer luck or by astute planning Dolman made his move into property development at just the time when the cloth industry began a slow decline.

When Thomas died in 1575 he divided his estate between his three sons. His eldest son, John, received Frethorne manor, while his second son, also named Thomas, received Shaw. John contested his father's will, claiming that he, as the eldest, should have received Shaw.

A lawyer by training, John managed to win his case, but the story did not end there; Thomas Dolman the younger managed to gather enough cash to purchase Shaw from his brother, so regained his bequest.

The younger Thomas Dolman began to build Shaw House to replace an earlier manor nearby. Tree-ring dating evidence suggests that timbers for the new house were cut in 1579 and the house was finished by 1581. 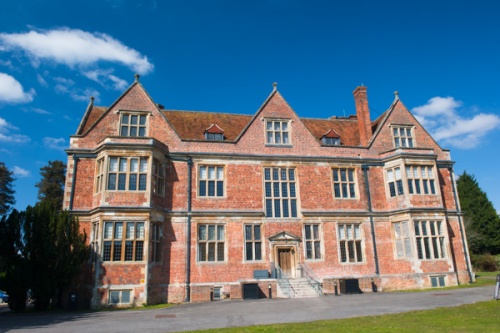 Shaw House is built to an H plan, with a central rectangular block and two cross wings. In the centre of the south facade is a projecting entrance, creating the illusion of a symmetrical E-shaped house. Above the entrance are two inscriptions, one in Latin and one in Greek.

The Greek translates as 'Let no envious person enter here', and the Latin text as 'The toothless man envies the teeth of those who eat, While the mole treats the eyes of the roe deer as of no importance.'

It seems that Dolman was well aware that his display of wealth would arouse envy in his neighbours. He was also thumbing his nose at local residents who had depended upon the Dolmans to support the Newbury cottage industry of spinners.

The material is red brick, with pale stone used for corner quoins and around window and door openings.

The remarkable thing about Shaw House is just how little it has been altered since it was built. The only alteration of note is the 19th-century addition of a gallery and loggia on the north side (the rear). Aside from that, the house as we see it today is essentially what Thomas Dolman showed to his guests in the later 16th century.

Those guests included several monarchs. Elizabeth I stayed here in 1592, probably in the first-floor chamber now called King Charles' Room. In 1602 James I and Anne of Denmark visited Shaw, and Anne came on her own in 1612. 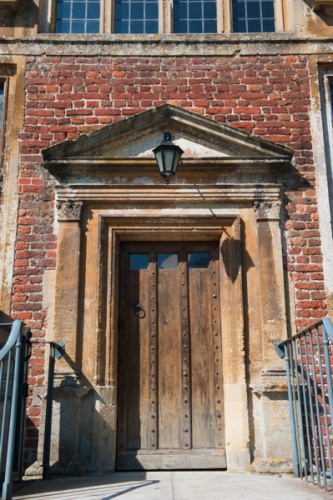 Shaw House in the Civil War

Shaw House was one of three Royalist strongholds in the Newbury area held for the king during the Civil War (the others being Donnington Castle and Speen). The owner of the house was Humphrey Dolman, who supported Parliament. Humphrey, however, was away at the time and his son, another Thomass Dolman, supported the king.

Tradition says that King Charles had his headquarters at Shaw House, but recent historical studies suggest in fact that he never came near Shaw House during the conflict, though he may have stayed at another house owned by the Dolman family in the area. But whether the king himself stayed here or not, the house itself was in the heart of the action on the eventful day of 27 October 1644.

Royalist pikemen and musketeers under Lieutenant-Colonel Richard Page held off an attack by the Earl of Manchester, who had a reported 7,000 soldiers in his force. The battle ended in a stalemate, with neither side strong enough to press home an advantage. King Charles pulled back his men, and Parliamentarian soldiers looted Shaw House but left the structure relatively undamaged. 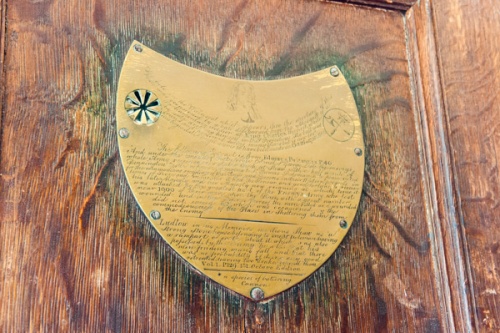 Charles I plaque (musket ball hole at the upper left)

The musket ball that almost killed a king

A famous story goes that King Charles was dressing for the battle near one of the bow windows in the first-floor bedroom now known as King Charles' Room. A musket ball fired by a Parliamentarian soldier passed through the window, narrowly missed the king, and struck the wainscotting on the far side of the window embrasure.

A small brass plaque now marks the spot, and a starburst-shaped opening in the plaque allows you to see the hole made by the ball.

Though this story has been widely circulated and marks one of the most memorable moments in the long history of Shaw House, it simply can't be true. As mentioned above, the king never came to shaw House during the battle. Perhaps even more telling is that there is no mention of this dramatic episode in contemporary accounts of the battle.

In fact, the first mention of Charles' near-death experience comes from over 100 years later. Whether the episode ever took place, Shaw House was certainly at the heart of the battle, and there's no reason to doubt that the hole made by the musket ball is genuine; its a reminder of just how frantic it must have been here on that eventful day in 1644!

Charles II did not forget the support of the Dolmans when he was regained his father's throne in 1660. Thomas Dolman was knighted, and Charles came to visit him at Shaw. William of Orange also stayed here on his way to London to be crowned as William III, and Queen Anne came to stay in 1703.

In 1720 the house was sold to the 1st Duke of Chandos, who set about redecorating the old-fashioned manor. He installed Chinese wallpaper set in plasterwork frames. Though the wallpaper is gone, the frames survive.

Modern copies of the original Chandos wallpaper have been installed, and help recreate a wonderful 18th-century ambience. From Chandos, the house passed through the hands of the Andrews and Eyre families. The Eyre's sold off the house and all its furnishings in 1905, which is why there is so little interior furniture or artwork on display today. 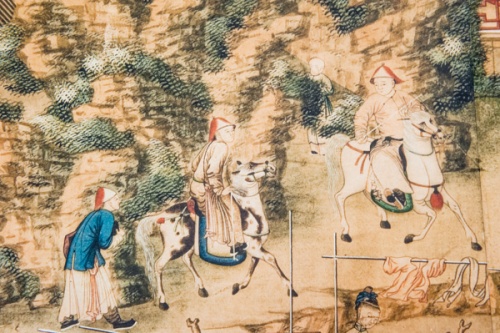 When World War II broke out Shaw House was requisitioned by the War Office to serve as accommodation for troops. But it would soon fulfil a new role. On 20 February 1944, a German air raid hit Newbury and inflicted heavy damage on the town.

One of the German bombs hit the local council school, killing several students and completely destroying the building. The school was moved to Shaw House as a temporary measure.

In this case, 'temporary' lasted 40 years, for the school continued after the war and only came to an end in 1983 when the house was declared unsafe. The school was moved into modern buildings and Shaw House sat empty.

Then with the aid of grants from English Heritage the local West Berkshire Council embarked on an ambitious restoration scheme to return Shaw House back to something approaching its Elizabethan splendour. The restoration project cost GBP 6 million and took several years to complete, but in 2005 the house was reopened as a venue for events, conferences, and as a historic attraction. 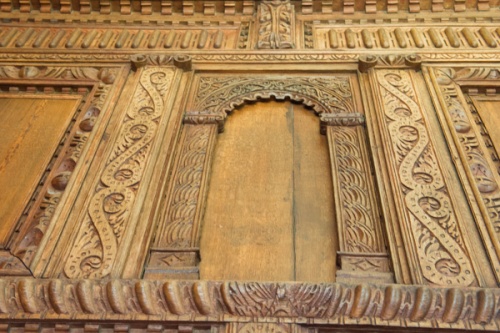 Most of the major rooms are open to view, though no original furnishings remain beyond one fireplace in the King Charles Room and an 'Armada Chest' strongbox in the small museum on the first floor.

The museum is fascinating, telling the story of the Dolman family, the Civil War at Shaw House, how the house was built and how it was restored. There are mementoes of Shaw School, including school ties, yearbooks, photos, and reminiscences of former students.

My favourite exhibit was an amusing 'Ode to Shaw House Floors'. When we visited there was also a temporary exhibit on the Newbury Bombing Raid, which I found quite moving and poignant.

In contrast to stately homes that are full to bursting with opulent furniture and paintings, Shaw House seems almost bare inside, save for the rather odd combination of modern desks and flip charts set up in rooms that are ready for conferences.

But the very absence of furniture means that you can really see and appreciate the structure of the house and room decoration. In several places, you can glimpse behind the restored panelling and see the actual brickwork and 'bones' of the building.

There are extremely good information panels in most of the rooms, and these do an exceptional job of explaining the history of the house and how each room was used.

Before we visited Shaw House I knew very little about the building. I had seen several attractive photos of the house, and I'm keen on Elizabethan architecture and history so I knew I'd enjoy myself, but I must say I was very impressed with the restoration and how the house is presented. It's a fascinating historic building and well worth a visit. It is a shame that the opening hours are somewhat limited, but I'd definitely recommend a visit. 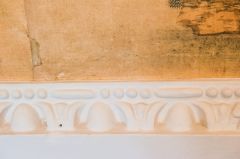 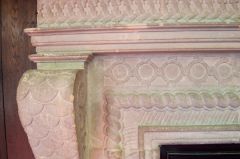 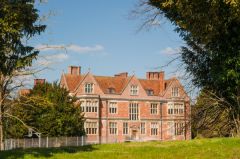 More self catering near Shaw House