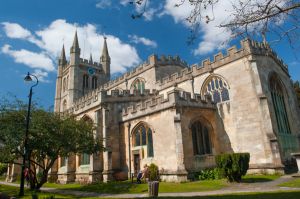 A wonderful early 16th-century church that owes its existence to the success of local cloth merchant John Smallwood (c. 1465-1510), often called 'Jack of Newbury'. Smallwood (also known as John of Winchcombe) was a fascinating character, born in Winchcombe, Gloucestershire, he grew to become the most powerful clothier in Britain.

We know little about Smallwood's early life, but one story goes that he was a novice in a monastery in his native Winchcombe, but he despaired of the religious life and escaped, making his way to Newbury where he apprenticed to a wealthy clothier.

When his master died, he married his widow, acquiring a thriving business in the process. Jack supposedly led a force to 100 men to fight at the Battle of Flodden in 1513, and subsequently, he was responsible for getting Henry VIII to lift trade restrictions on British cloth merchants.

More to the point for our story, his wealth paid for the rebuilding of the Norman church at Newbury, and in the process created the superb late Perpendicular church we see today. Throughout the building, you can find heraldic symbols of the Smallwood and Winchcombe families - particularly in the carved roof bosses and stained glass windows.

Some bosses show the initials of Jack of Newbury and his son, also named John. Jack of Newbury's memorial brass is located under the tower that he helped create.

The church is composed of an aisled nave, chancel with north and south chapels, and a west tower. The interior of St Nicholas suffered during the First Battle of Newbury in the Civil War when Cromwell's men used the church as a hospital, stable, and, after the battle, as a gaol for Royalist soldiers.

Many of the original furnishings were lost at that time, but much of interest remains. Among the finer furnishings is the finely carved Jacobean pulpit, which dates to 1607. John Wesley is known to have preached from the pulpit in 1740.

In the south aisle is the wall memorial of Griffin Curteys (d. 1587). This is a quite fascinating monument, with a three-quarter effigy of the deceased in an arched recess while a matching recess shows three levels of smaller effigies, with three women on the top row (presumably these were three wives) and 11 children arrayed beneath.

The church is normally open daylight hours. If the south door is locked you can usually get it from the church offices, located in a modern building immediately opposite the door.