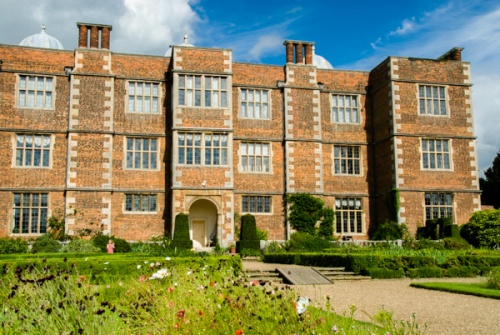 Doddington Hall is a lovely late Elizabethan house begun in 1595 by Thomas Tailor and finished in 1600. Tailor, who was registrar to the Bishop of Lincoln, employed as his architect Robert Smythson, one of the foremost architects of the day. Smythson was also responsible for some of the finest Elizabethan houses, including Longleat and Hardwick Hall.

Tailor's house followed the Elizabethan fashion for symmetrical central block flanked by wings, creating a rough H shape. The exterior of the house as we see it today is essentially unchanged from 1600, making it a bit of a time-capsule of architectural style.

During the Civil War, Doddington Hall escaped damage because it had family members on both sides of the conflict! In 1749 the Hall became the property of John Delaval, who renovated the interior rooms in contemporary Georgian style.

Doddington Hall has never been sold. It has been owned by only five families over the past 4 centuries because on several occasions the inheritance was through the female line. The interior features some lovely period furniture, ceramics, textiles, and artwork collected by family members over the centuries. Though the rooms are grand, the overall effect is unmistakably that of a family home.

The ground floor contains a great hall, parlour, and a library. On the first floor are the Holly Bedroom, with a four-poster bed over 300 years old, and the Drawing Room, a grand Georgian chamber. There is also the Tiger Bedroom, featuring a bed known to have been slept in by the Duke of Cumberland, infamous for his role in persecuting the Jacobite followers of Bonnie Prince Charlie. 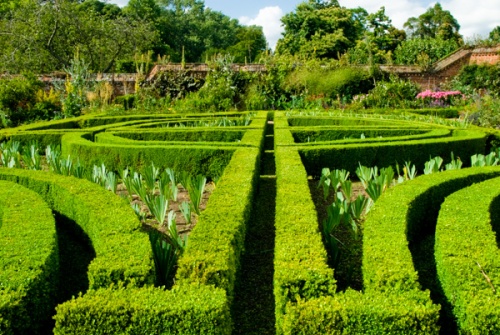 The formal gardens behind the Hall

The upper floor has three main rooms; a small print Room, with an exhibition about the life of George Jarvis, owner of Doddington Hall in the Victorian period. In addition, there is the Long Gallery, which takes up most of the floor. This elongated hall was used by Elizabethans on rainy days as a place to get exercise. It was later put to use as a bowling alley in Georgian times.

The most intriguing room on the top floor is the Tent Room, where the ceiling and walls are hung with an Egyptian tent too large and delicate to stand outside on its own.

The Hall is surrounded by 6 acres of formal and informal gardens. Immediately to the rear of the house are the formal gardens. Close to the house are geometric hedges, while raised flower beds are laid further away in a pleasing pattern. The colours are lovely from spring to summer. There is a small walled garden with herbaceous borders, with peonies and irises.

Beyond the formal gardens are several nature trails, and a kitchen garden. Closer to hand there is a turf maze, a small water garden, and a classical 'Temple of the Winds', as well as a statue of Shakespeare.

Immediately beside Doddington Hall is the Farm Shop and Restaurant, where you can buy local produce, including that grown in the Hall's own market kitchen, and home-baked goods.

St Peter's church, Doddington, is located immediately beside the Hall, and is open during Hall opening hours. The church is primarily a Georgian restoration of an earlier Decorated Gothic building.

Doddington Hall was a hit with our children, ages 7 and 13. Though there are no overt children's areas such as playgrounds, the Hall has tried to involve youngsters by offering a 'Unicorn Quiz', which our youngest enjoyed. Also, the extensive gardens offer the younger generation a chance to run about, and the turf maze was quite a hit with both of our children.

NB. Do not mistake this Doddington Hall with the house of the same name in Cheshire. 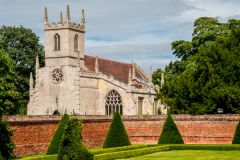 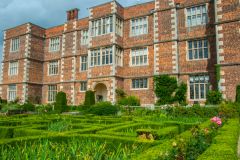 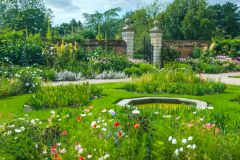 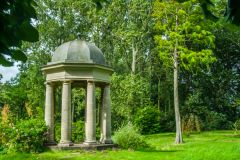 More self catering near Doddington Hall