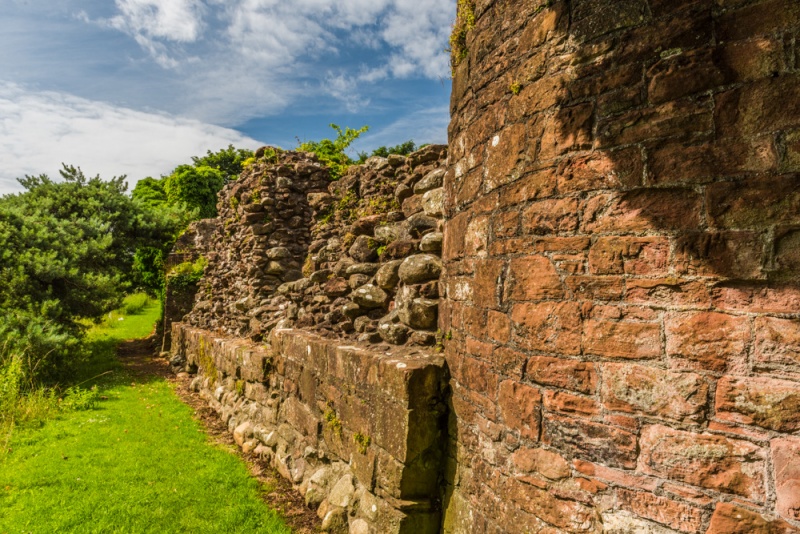 Remains of the curtain wall at Egremont Castle

The extensive ruins of a 12th-century castle stand on a hill above Egremont town, overlooking the River Ehen. The castle was built by William le Meschin, or Meschines, around 1130.

The gatehouse and curtain wall show signs of even earlier Norman herringbone stonework, so it seems likely that Meschin merely rebuilt or extended an earlier Norman fortress. Meschin was the first lord of Egremont, a barony created by William Rufus after he wrested control of this area from Scotland in 1092.

The Meschin family did not hold onto their barony for long; Meschin's son died young and the estate passed through his brother-in-law, the Earl of Skipton. The Earl had one child, a daughter named Alice, so the barony passed to her husband, a nephew of King David I of Scotland. The Earl joined David's invasion of England and Egremont once more was in Scottish hands. After David's death in 1153, the barony once more reverted to English hands. 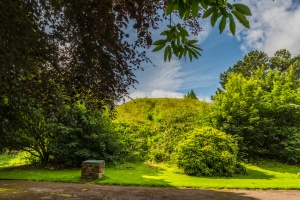 The gatehouse stands inside a deep ditch and was accessed by a drawbridge. It is still impressive, with a passage that was once domed. The passage leads to a small motte, or castle mound, with a small inner bailey, or enclosure.

The motte and bailey are surrounded on three sides by an outer terrace, or platform. Excavations show that a circular 13th century stone keep once stood atop the motte, but no trace of the building can be seen today.

In the late 12th century the castle passed to Lambert de Multon, who built a curtain wall between the motte and the bailey. A range of domestic buildings including the great hall was erected on the inner side of the wall. Opposite the gatehouse were ancillary domestic buildings, but of these only the foundation walls remain. One of Lambert's heirs built the great hall atop the motte.

Lambert lost Egremont in a lawsuit when his wife's brother, Richard de Lucy, successfully claimed that the castle should have passed down to him. Richard de Lucy took control in 1200, but tragedy struck in 1205, when his wife Grunwilda was killed by a wolf while on a hunting trip. Richard died without an heir, and a legend arose that Egremont would never pass to a male heir.

The castle reverted to the De Multon family, and in 1267 Thomas de Multon granted the town a market charter and the right to hold a fair each September. This fair evolved to become the annual Crab Fair for which Egremont is famous.

Egremont was sacked twice by Robert Bruce in the early 14th century, and rebuilt by the Fitzwalter family. The end came during the Rising of the North in 1569 when several northern noblemen took part in a rebellion to place Mary, Queen of Scots on the throne of England. The rebellion was suppressed, and Egremont Castle was slighted to prevent it being used again. It crumbled into ruin, but what an impressive ruin!

The castle lay abandoned by the 1570s, save for a single room which was used as a courthouse until 1786.

The Horn of Egremont

An old story, popularised in a poem by William Wordsworth, relates a tale of brotherly treachery and a hair-raising escape. The du Lucy's had a mighty horn, which could only be blown by the rightful heir to their estates. During the Middle Ages, Sir Eustace de Lucy and his brother Hubert left England to go on Crusade.

Sir Eustace blew the Egremont Horn, which hung from the castle gateway, and made his brother vow that if he, Eustace, fell in Palestine, Hubert would return to rule Egremont, so that the castle would always have a De Lucy as its lord. Hubert treacherously arranged to have his brother killed, and returned to rule Egremont. However, since he was not the rightful heir, he did not dare blow the Horn of Egremont.

One day Hubert heard the horn sound loudly. Knowing that only his brother had the right to blow the Horn, he realised that Eustace was still alive and had returned to seek vengeance. Hubert fled from the postern gate while Eustace rode in the main castle gate. 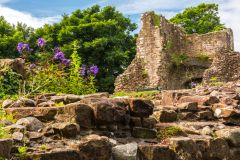 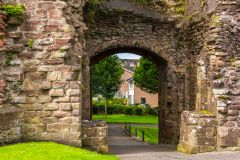 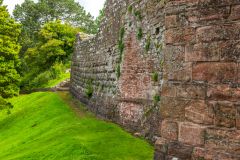 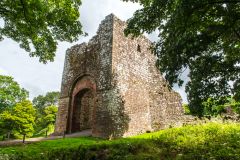 More self catering near Egremont Castle >>