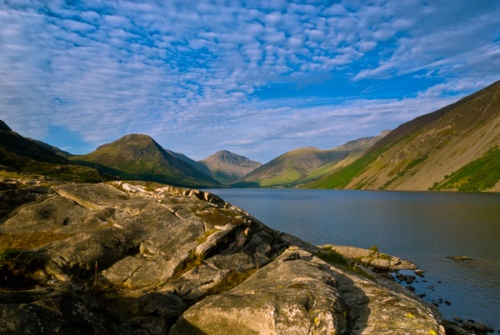 Wast Water (sometimes spelled Wastwater) is the deepest lake in the Lake District. In fact, it is even deeper than the Irish Sea! This beautiful lake is located in some of the best climbing country in the National Park.

The hamlet of Wasdale Head, located at the eastern end of the lake, is an extremely popular walking centre. Paths lead from Wasdale Head to some of the most travelled (and deservedly so) trails in the area.

Wasdale can make a good claim to be the birthplace of British rock climbing. Visitors have flocked here since the early 19th century to take advantage of the challenging peaks that ring the Wasdale valley. The most popular walk is probably the ascent of Scafell Pike, the highest peak in England at 3210 feet.

There are several routes up Scafell Pike; one of the most popular trails starts at the National Trust parking lot at Brackenclose and leads up a well-defined trail to the summit, via Lingmell Gill and Hollow Stones. Though the climb is not difficult, the usual precautions apply - weather can change extremely quickly, so always come prepared!

The scenery of Wast Water is utterly compelling; the outline of the three peaks that stand at the eastern end of the lake (Lingmell, Scafell Pike, and Great Gable) was selected as the symbol of the Lake District National Park.

There is no path per se along the northern shore of the lake, but the minor road to Wasdale Head skirts the shoreline for the entire length of the lake. There is a path along the southern shore, which hugs the steep cliffs known as The Screes. This trail can easily be combined with the road route to create a spectacular, easy walk around the entire circumference of Wast Water. 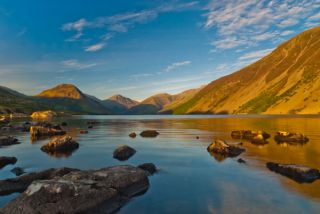 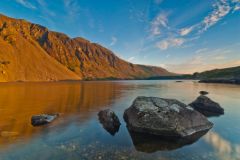 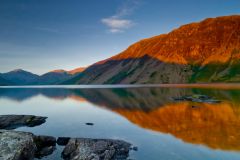 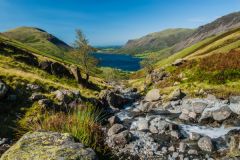 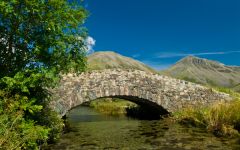 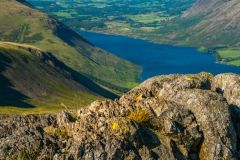