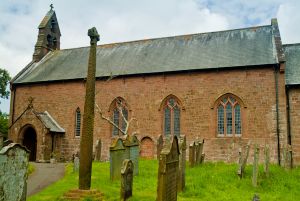 There has been some form of religious building at Gosforth since the 8th century. The current church of St Mary is a Victorian building incorporating pieces from a 12th-century Norman church.

The church consists of a nave with north aisle, chancel, and a pair of north vestries. Norman stonework can be found in the south wall of the nave. There is no tower, but a very nice bell turret at the west gable houses a ring of three bells.

The real treasure of Gosforth, however, stands in the churchyard. This is the so-called Gosforth Cross, a beautifully carved Viking cross dating from the late 10th or early 11th century. The cross is made of red sandstone, and stands 14.5 feet high. It is round at the base, rising to a square top with a cross head.

The lower, rounded section is carved with a representation of the Tree of Life, with interlaced branches creating a wonderfully Scandinavian pattern. The square upper section has a wealth of carving detail, including images of a horseman, dragons, serpents, human figures, and geometric design.

Only the east face has anything vaguely Christian; here you will find a carving of Christ standing above figures thought to be Mary Magdalene and Longinus. The cross has traditionally been interpreted as representing the triumph of Christianity over the old Norse pagan religion, but when you look at the carving you have to wonder just how complete that victory was at the time it was carved!

The carving is truly amazing, and the Gosforth Cross must be reckoned one of the finest pre-Conquest treasures in England, right up there with the Bewcastle Cross, also in Cumbria. It's actually a bit of a shame that it is still standing out in the British weather, mind you, where it will undoubtedly continue to suffer the effects of advancing years.

But, there's more to see within the church. At the east end of the north aisle are a pair of beautifully carved hogback tombstones, discovered during repairs to the church foundations in 1896. These were meant to act as houses of the dead, and mark the graves of local Norse chiefs. They are carved with lovely geometric patterns and battle scenes.

The capitals of the chancel arch are Norman work. The south capital is carved with three faces, and the north capital shows a Green Man symbol on one side and two detached arms. There are further ancient fragments of stonework including a section of a carved cross.

St Mary's may be a Victorian church in most respects, but it contains some wonderful historic treasures that make it a 'don't miss' destination.