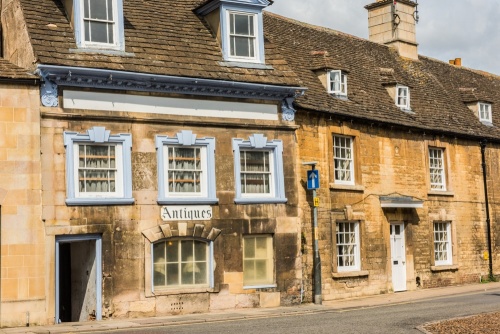 Stamford is a thriving Lincolnshire market town full of historic buildings. Many of Stamford older buildings are built of local Lincolnshire limestone, making for a very attractive and homogeneous whole. All Saints church dates to the 13th century and houses memorials to the Browne family, who built the 15th-century almshouse known as Brownes Hospital.

Just outside Stamford is Burghley House, one of the best Elizabethan mansions in the country, built by William Cecil, advisor to Elizabeth I. On the Deeping Road are the remains of Stamford Priory, a 12th-century Benedictine monastery.

Sir Walter Scott proclaimed Stamford 'the finest stone town in Britain'. The traditional buildings that so impressed Scott led to the centre of historic Stamford being named a conservation area in 1967. With over 600 listed buildings, it is easy to see why; that total of 600 is more than half of the total for all of Lincolnshire!

Among those 600 buildings are no less than 5 medieval churches, a remarkable statistic when you consider that Stamford has a modern population of just over 20,000 inhabitants. A particular feature of the town centre is a large number of 17th and 18th-century coaching inns.

The Romans built their major road of Ermine street through what is now the middle of Stamford, linking London and Lincoln. The first real settlement grew up in the Danish period, and by the 10th century, Stamford was so large that King Edgar named it a borough, one of only five in the Danelaw region. During the medieval period, Stamford was a centre of the wool trade and produced a fine wool cloth known as Stamford Cloth. 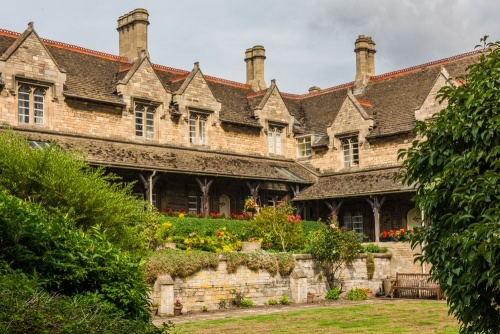 Though the original borough was a walled town, only traces of the town walls remain. When the Normans tried to exert control over the area in the aftermath of the Norman Conquest they built a castle at Stamford, probably on the site of an existing administrative centre for the Rutland estates once owned by Edith, Edward the Confessor's queen.

Stamford Castle was originally a simple earthwork motte and bailey, bt by the 12th century a stone shell keep was erected on the motte. The castle was pulled down in the late 15th century and now only a small section of the curtain wall stands, at the junction of Bath Row and Castle Dyke.

All Saints Church dates to the 13th century, though it is probably the same church mentioned in the Domesday Book of 1086. Only fragments of 12th-century stonework remain. The most famous vicar was the antiquarian William Stukeley, who did so much to catalogue and study ancient monuments in Britain.

Inside All Saints, you will find memorials to the Browne family, who built the 15th-century almshouse known as Browne's Hospital. The hospital was founded in 1485 as both a dwelling and house of prayer for 10 poor men and 2 poor women of Stamford. The dozen residents were administered by a Warden and a Confrater. They were required to attend services in the chapel twice each day when prayers would also be said for the Browne family.

The almshouses still serve as a residence for 12 or 13 people, with the apartments laid out around a central courtyard garden. Visitors are welcome to tour the medieval parts of the Hospital on specific days such as the annual Heritage Open Days in September. One of the tour highlights is the original medieval stained glass in the Hospital chapel. 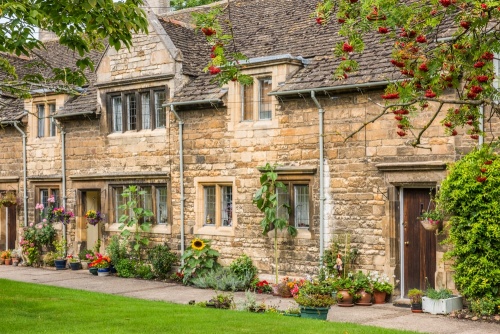 We do not know exactly when St George's Church was built, but it was in existence by 1199. Much of the church we see today was built in the 14th and 15th centuries under the patronage of William Bruges, the first Garter Knight of Arms, who is buried in the church. The connection to Bruges has led to St George's being called the original church of the Knights of the Garter. Several heraldic Garter panels survive in the south window of the north chancel.

St John's dates to the 12th century and was a daughter church of the Norman abbey at St Fromond. It was completely rebuilt in the mid-15th century and is an excellent example of Perpendicular Gothic architecture. One of the best surviving medieval features is the angel roof, brightly painted in black and yellow. Look for small figures of green men dotted amidst the figures of angels.

The interior boasts some very fine memorials from the 17th and 18th centuries, and there are finely carved Victorian pews and a tile floor. St John's is now redundant and is looked after by the Churches Conservation Trust. It is normally open daily.

Yet another medieval church in Stamford is St Martin's, which dates to at least 1146 if not earlier. The entire church was rebuilt in the latter half of the 15th century, and like St John's it is a very fine example of Perpendicular style.

Unlike the other surviving medieval churches in Stamford, St Martin's stood outside the town walls. Look for memorials to the Cecil family of Burghley House. The oldest Cecil tomb is that of Sir William Cecil, Elizabeth I's Chancellor and the most powerful man in the kingdom during her reign. 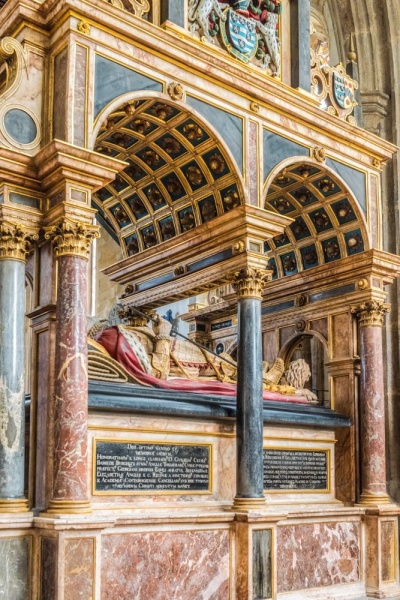 The earliest parts of St Mary's Church date to the 12th century. The tower is a very good example of Early English architecture, added in the 13th century, with a broach spire added 100 years later. Another 14th-century addition was the north chapel, dedicated to the Corpus Christi Guild. The chapel features a beautiful starred ceiling. The church had a long history of association with the trade guilds of Stamford.

For many years Stamford had a dedicated museum of local heritage. The museum closed down due to budget cuts, but many of the displays were moved to the library on the High Street. Here you can explore 1000 years of Stamford history. That history is depicted in the Stamford Tapestry, a 20-foot long woollen work of art depicts key scenes from the past 1000 years of local heritage. 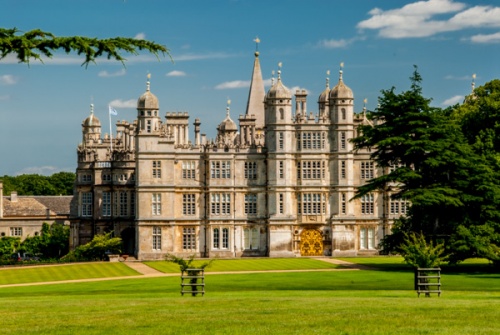 On the Deeping Road are the remains of Stamford Priory, a 12th-century Benedictine monastery dedicated to St Leonard. The Priory was erected on the presumed site of a 7th-century monastery established by St Wilfrid and destroyed in a Danish invasion. The priory was refounded around AD 1082 by William the Conqueror and the Bishop of Durham, as a daughter house of Durham Cathedral. The west front and north arcade of the priory church survive.

Another monastic survivor is the gatehouse of Greyfriars, a 13th-century Franciscan friary. Joan 'the Fair Maid of Kent', wife of Edward, the Black Prince, was buried at Greyfriars in 1385 beside her first husband, Thomas Holland, Earl of Kent. After the friary was dissolved at the Reformation the monastic buildings were torn down, and all that remains today is a solitary gateway on Ryhall Road. The gateway is sometimes called Whitefriars, as it was mistakenly linked to a Dominican friary.

The medieval town of Stamford was surrounded by stone walls. Only one tower remains, at the corner of West Street and Petergate. This angle bastion tower dates to the late 13th century and has been rebuilt numerous times over the centuries. It stands three stages high and is made of ashlar reinforced with modern concrete. The walls on either side are modern.

This is just a taste of the numerous historic highlights in and near Stamford. Take your time; there's a lot to explore! 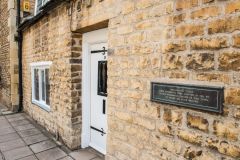 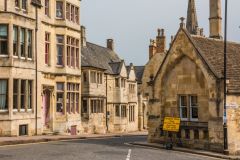 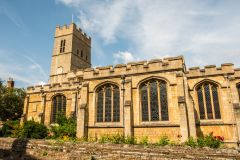 More self catering near Stamford >>

More bed and breakfasts near Stamford >> 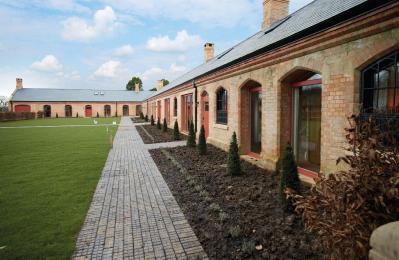 The Dairy at Burghley (14 guests)

The Dairy sits on the Burghley Estate in the heart of Capability Brown parkland, landscaped during the 1760s. After careful restoration, this historic building has been transformed into beautiful holiday …
Sleeps 14 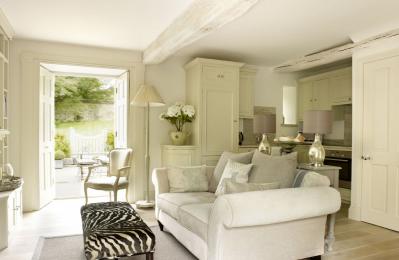 This exquisitely designed luxury 18th century cottage in Tinwell is a dreamy abode for couples looking for a romantic break. Nearby Stamford boasts many chic boutiques, eateries and alehouses, while …
Sleeps 2