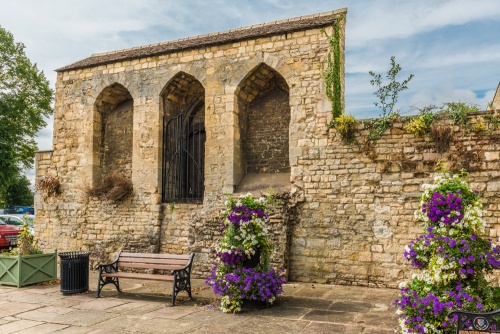 Shortly after William the Conqueror's victory at the Battle of Hastings the new Norman overlords of England built a traditional motte and bailey fortification beside the River Welland in Stamford, south of Sheepmarket.

The site was relatively removed from the main north/south road and bridge, suggesting that the site was chosen because it was already in use, possibly as an administrative centre for the estate held by Edith, Edward the Confessor's queen, prior to 1066.

The Domesday Book of 1066 records that five existing houses were pulled down to make space for the new castle. A shell keep was built on the earthwork motte in the first half of the 12th century. 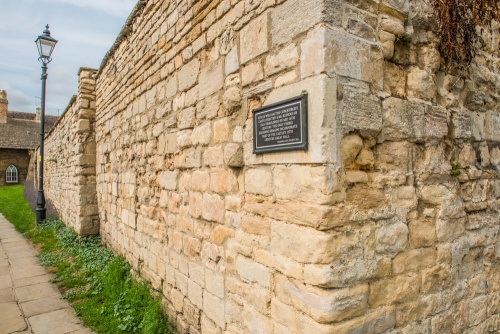 The castle wall on Bath Row

The Norman castle was almost certainly erected by the Crown, but by the late 12th century it was in the hands of the lord of the manor of Stamford.

Stamford Castle saw action in the 'Anarchy', the Civil War between King Stephen and Queen Maud in the middle of the 12th century. In the turmoil that followed the coronation of Henry II, the town of Stamford supported the king and the castle supported Earl Ranulf of Chester. The Earl's supporters besieged the castle and forced the garrison to surrender.

After Henry's eventual triumph he granted the castle to Richard Humet, Constable of Normandy and Sheriff of Rutland. It was probably Humet, or his son William, who built the great hall. In 1189 the castle served as a refuge for the Jews of Stamford when a group of crusaders converged on the town's fair. The crusaders, fired by religious zeal, killed a large number of the town's Jewish population and rest fled behind the castle walls for safety.

In 1199 the first record of a chapel is recorded.

The castle remained in use throughout the 12th and 13th centuries but by 1340 it was recorded as being 'old, and the walls decayed'. The description goes on to itemise the castle layout, describing a great hall, tower, solar chamber, chapel, prison and turret. Much of the castle appears to have been pulled down in the reign of Richard III and the stone used to rebuild Whitefriars.

By 1600 very little remained of the medieval fortress, but a part of the great hall had been transformed to serve as a Court Leet - administering the manor of Stamford - a function it served into the 19th century. The castle site survived as a large green space into the 20th century and part of the space was used as gardens.

The castle motte survived until 1936 when it was levelled to make way for a bus station. The construction work revealed the foundations of a circular building - probably the tower referred to in 1340. Excavations in 1972 and 1976 revealed a 9th-century pottery kiln to the north of the medieval hall. The Burghley Estate sold the castle site in 1977 to provide the Warrenne Keep housing estate.

All that remains of Stamford Castle is a short section of wall and three large arches at the corner of Castle Dyke and Bath Row. The arches probably formed part of the Great Hall. The site is extremely easy to reach on foot from the town centre, though it is not signposted. There is a small plaque on the wall commemorating the castle and its history.

More self catering near Stamford Castle