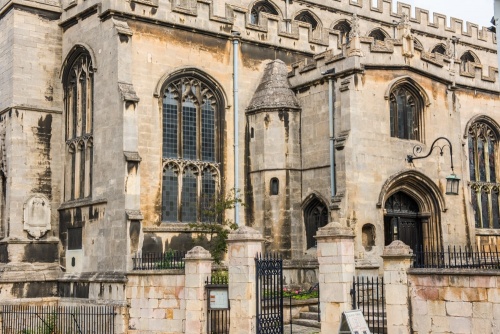 The first church on this site was built around 1140 by the abbot of Peterborough. Shortly afterwards it was given to the nearby nunnery of St Michael. Hardly any trace of the 12th-century building remains.

The present building dates to the period between 1485 and 1494. Those dates are based on heraldic carvings on the nave corbels that depict the arms of the bishops of Lincoln and Durham and the Archbishop of York. 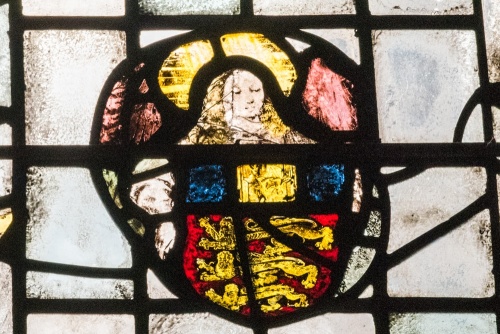 The church layout consists of an aisled nave, a west tower, south porch with a parvise above (a chamber for the priest), and a chancel with north and south chapels. The south chapel was originally a guild chapel. Both the north and south aisles have their original 15th-century timber roofs.

Another historical highlight is the 14th-century octagonal font, which may have come from the earlier church on this site. The east window boasts a collection of 15th and 16th-century glass, including glass fragments brought from Tattershall collegiate church. The stained glass panels were arranged in their current layout in the 18th century.

St Martin's has long maintained a close association with the Cecil family of Burghley House. The grounds of Burghley extend almost to the churchyard. The chapel holds memorials to generations of the Cecils, many of whom are buried in the burial vault beneath the floor.

The most historically important memorial is to William Cecil, the first Lord Burghley (1520-1598). Cecil served under Elizabeth I as Lord High Treasurer of England and was probably the most powerful man in the realm. His memorial is an outstanding example of Renaissance sculpture, made of marble and alabaster. It has been described with some reason as 'one of the finest examples of its kind'. 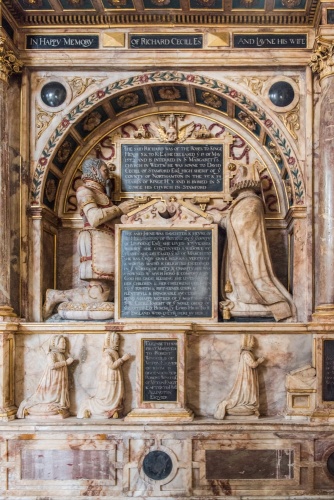 The lengthy inscription fills three panels and runs around the side of the monument. It reads in part:

'Sacred to God most good and great, and to memory. The most honourable and far renowned Lord William Cecil, Baron of Burghley, Lord High Treasurer of England, President of the Court of Wards, knight of the most noble order of the Garter, Privy Counsellor to the most serene Elizabeth, Queen of England, etc., and Chancellor of the University of Cambridge, under this tomb awaits the second coming of Christ.

Who for the excellent endowments of his mind, was first made Privy Counsellor to Edward the sixth, King of England; afterwards to Queen Elizabeth: under whom being intrusted [sic] with the greatest and most weighty affairs of this kingdom, and above all others approved, in promoting the true religion, and providing for the safety and honour of the commonwealth; by his prudence, honesty, integrity and great services to the nation, he obtained the highest honours: and when he had lived long enough to nature, long enough to glory, but not long enough to his country, quietly fell asleep in Christ ...' 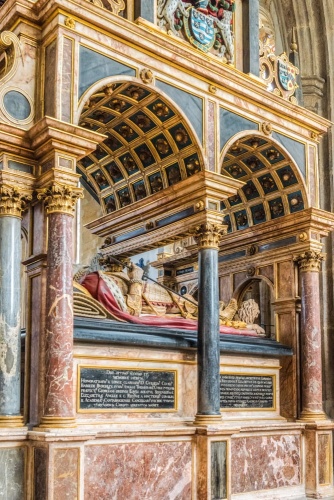 Compare that effusive praise with the simple description on a memorial tablet to Thomas Goodrich (d. 1885) which describes him as 'A rare cricketer and a good man'.

Also in the chapel is a memorial to John Cecil, the 5th Earl of Exeter (d. 1700) and his wife Anne (d. 1703). The Earl had very precise ideas about how he wanted to be remembered and he commissioned the Italian sculptor Pierre Monot to create the monument before he died.

One of his instructions was the florid inscription, which is rather over the top when you consider the Earl was writing it about himself. It reads in part:

'Here lies buried, John Cecil, Baron of Burghley, Earl of Exeter, son of the great Burghley's great grandson, and in no wise unworthy of his renowned progenitor. For he beautified an excellent genius with the best of manners, and the best arts ... He had for wife, and the companion of his virtues and ravels, and in a manner, of his studies, Anne, of the right noble house of Cavendish, daughter of William, Earl of Devon; for the beauty of her body, ingenuity of her mind, and all those accomplishments which can in any way adorn a lady, famous; of whom he begat five children: happy in his spouse, and happy in his offspring!' 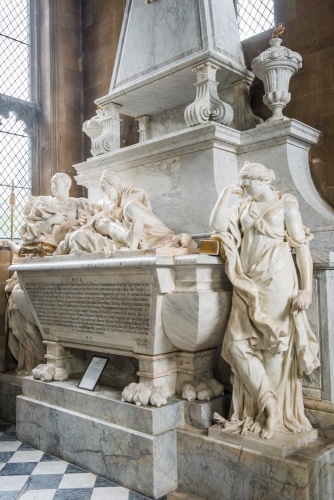 One of the most intriguing memorials in the Burghley Chapel is also one of the easiest to miss. High on a pillar is an unremarkable tablet commemorating Lady Sophia Cecil (b. 1809, d. 1902). Lady Sophia was the daughter of Charles, the 4th Duke of Richmond. The Duke of Richmond famously hosted a ball in Brussels on the eve of the Battle of Waterloo, 6 June 1815, which the Duke of Wellington and his leading aides attended, mere hours before the pivotal conflict against Napoleon began. Lady Sophia, then aged only 6, was a spectator at the ball. She is not buried here but at Kensal Green Cemetery in London.

In the south aisle is a 15th-century stained glass window with six panels depicting scenes from the Biblia Pauperum (illustrated books depicting the fulfilment of Old Testament stories in the New Testament). Like the east window, this glass was brought from Tattershall collegiate church. The top row shows Moses striking the rock, Samson carrying the gates of Gaza, and David slaying Goliath. The bottom row depicts the Crucifixion, the three Maries at the tomb, and the Resurrection.

St Martin's Church is usually open to visitors and is easy to reach, being just across St Mary's Bridge on the south side of the River Welland. Almost immediately opposite St Martin's is the Burghley Estate office. 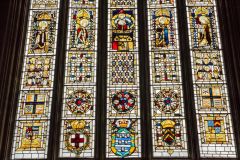 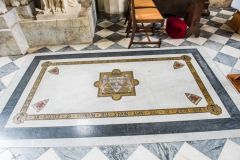 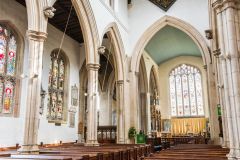 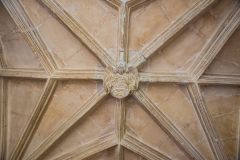 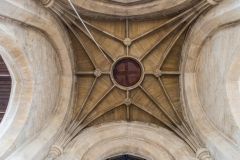 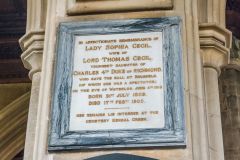