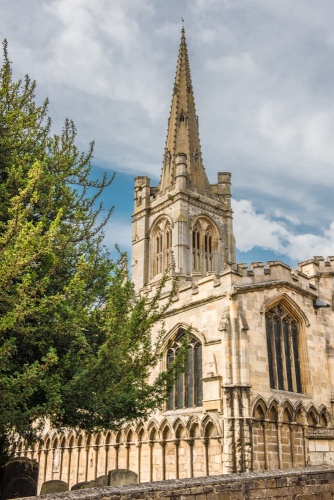 The spire of All Saints Church rises above the rooftops of Stamford like a beacon. There has been a church on this site on Red Lion Square since the Saxon period, but the present building dates primarily to the 13th century (around 1220).

All Saints is one of the oldest churches in Stamford. It began as a daughter church of St Peter's, but in the 16th-century St Peter's was closed and the two congregations merged.

The chancel, south chapel, nave and south aisle all date to the early 13th century. 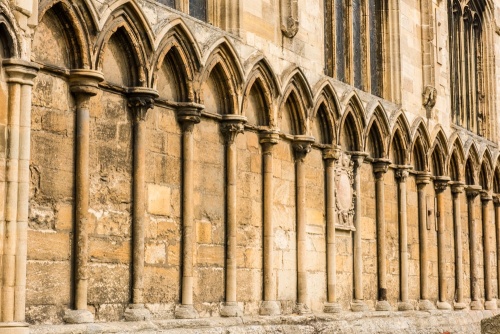 Like many historic buildings in Stamford All Saints was badly damaged in 1461 by Lancastrian forces, during the course of the Wars of the Roses. It was in dire need of restoration after the army left, and help duly arrived in the form of the brothers, William and John Browne.

The Brownes were successful wool merchants and regular attendees of worship at All Saints, where their parents were buried. From 1470 the Brownes gave money to rebuild the clerestory in the nave, the north aisle, the west window, the tower, spire and upper part of the south aisle. Look over the chancel arch and you will see a heraldic shield bearing the letter 'B', commemorating the Browne family's restoration of the church. 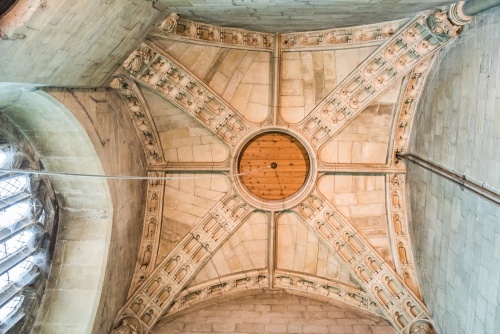 Large memorial brasses to the Browne brothers' parents John Browne (d. 1442) and his wife Margery (d. 1460) are set on the east wall of the north aisle. He is shown in a sleeved gown and he stands on two woolsacks symbolising his membership in the Staple of Calais. Nearby is the brass of John Browne the younger, shown in his Alderman's mantle, with his wife Agnes. With them are two smaller brasses depicting John's son Christopher and his wife.

The chancel has 13th-century pillars in Early English style and carved angels act as corbels to support the timber roof. Decorated bosses feature the Browne family crest, a stork on a woolsack, with the family motto '+ me spede' ('Christ speed me'). Behind the altar is a Victorian reredos depicting the Last Supper.

The south chapel features a beautiful 15th-century timber roof. Set into the east wall is a 13th-century piscina, and in the floor is a memorial brass to William Browne and his wife Margaret. William is depicted in his merchant's gown, standing on two woolsacks. The Browne family motto appears over his head. 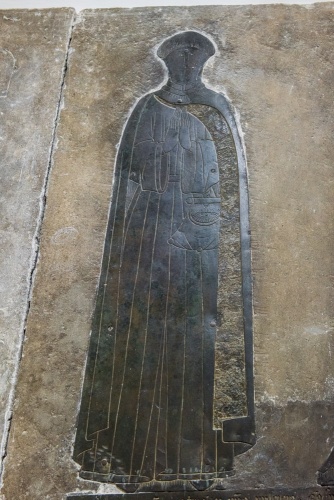 Near the Browne brass is a brass commemorating William and Margaret's granddaughter Margaret Elmes. On the wall is a headless brass to Henry Wykes, who served as the Vicar of All Saints from 1479-1508. Wykes owned the Manor of Burghley, which his descendants sold to the Cecil family, who built Burghley House. Also in the south chapel is a memorial to Thomas Truesdale, who founded the almshouses in Scotgate. The vestry doorway dates to the 15th century.

The large west window in the nave was a gift of Edward J Browne of Boston, Massachusetts, USA, in memory of his ancestor William Browne. South of the main west window is a small window with stained glass panels depicting the patron saints of the four nearby dioceses of York (St Wilfred), Lincoln (St Hugh), Lichfield St Chad), and Peterborough (St Peter). The glass was designed by Charles Eamer Kempe, the famous late-Victorian artist.

The pews are mid-Victorian and were designed by Edward Browning of Wothorpe. 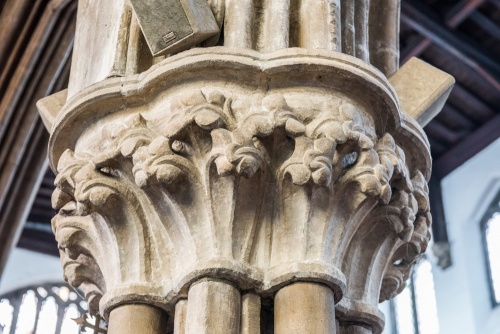 At the west end of the church is a beautifully carved 15th-century octagonal font decorated with quatrefoils and heraldic shields. In the tower is a late 17th-century sundial.

The most famous Vicar of All Saints was William Stukely, who served from 1730-1747. Stukely is far better known as an antiquarian and the man who, more than any other, began the systematic study of ancient British sites. It was during his time as the vicar of All Saints that Stukely published his research on Stonehenge and Avebury.

All Saints is a delight to visit, a treasure trove of historic interest. The best feature by far is the Browne brasses, but don't miss the late medieval timber roofs and the beautiful 13th-century arcading on the south exterior wall (an unusual feature for a parish church). The Church is very easy to reach; it stands on the west side of Red Lion Square, within easy reach of anywhere in central Stamford. The church was open when we visited. 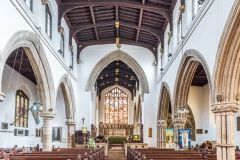 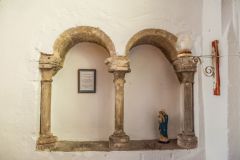 More self catering near Stamford, All Saints Church

More bed and breakfasts near Stamford, All Saints Church