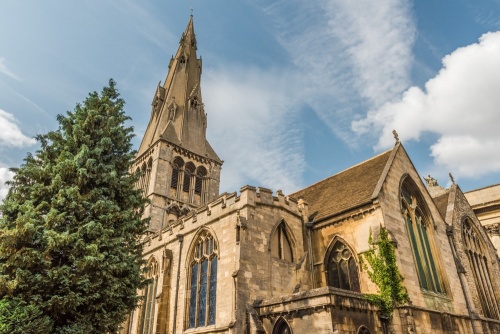 St Mary's Church is a lovely 13th-century building in a cobbled square at the junction of St Mary's Street and St Mary's Hill in the historic town centre of Stamford. This is very much a 'High Church' building, with a strong tradition of Anglo-Catholic worship. The church has variously been called 'St Maries by the Bridge' and 'the Church of Our Lady of Staunford [sic]'.

Though the earliest parts of the present church date to the 13th century there has been a church on this site since the late Saxon period. Fragments of early Norman carved stone were found in the tower during restoration work.

The oldest surviving part of the church is the 13th-century tower with its striking blind arcading on the exterior. The beautiful spire was added around 1300. Look for figures blowing trumpets and a statue of St William of Norwich holding a cross with a hammer and nails. Much later are the 15th-century south porch and north chancel chapel. 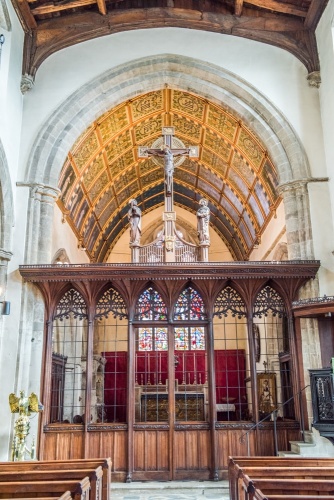 The nave and aisles were rebuilt in the 15th century when the clerestory was added. The restoration was made necessary after the church, like most of the town, suffered at the hands of a Lancastrian army in 1461, during the Wars of the Roses.

The church was extensively restored in Arts and Crafts style in the 1890s by the architect JD Seddings. A late addition was a huge rood, installed as a war memorial in 1920.

One of the historical highlights of St Mary's is a statue of Our Lady, standing in a niche against the east wall. The statue was carved around 1330 and was found hidden behind 17th-century panelling during restoration work. The sculpture was shown by the Royal Academy in 1987-88 as part of its exhibit on 'The Age of Chivalry'. 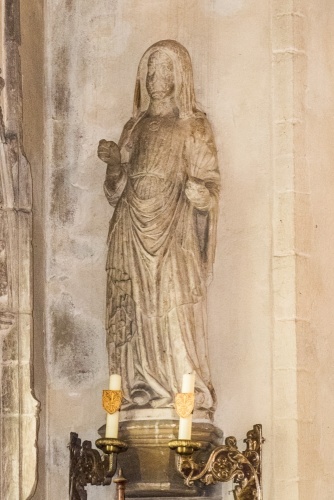 Set into a recess in the chapel wall is a 14th-century tomb holding a badly damaged effigy. The window above the effigy is 14th-century work and the niche may originally have held an Easter Sepulchre.

Between the two altars is the richly decorated tomb of Sir David Philips (d. 1506) and his wife. Philips fought with Henry Tudor (soon to become Henry VII) at Bosworth in 1485. Henry Tudor's mother was Margaret Beaufort, who lived at Collyweston, just outside Stamford, and Sir David acted as her steward. He was also Keeper of the King's Swans and managed the royal forest of Cliffe. Sir David's tomb bears the Welsh dragon, along with the Beaufort portcullis and the Tudor rose. 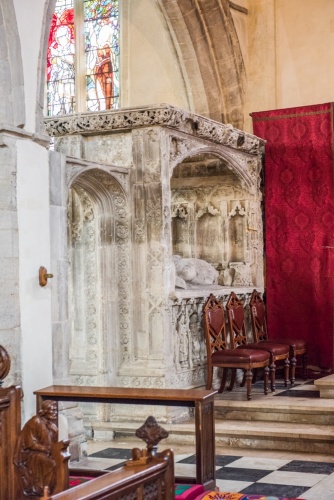 On the north side of the chancel is the 15th-century Corpus Christi Chapel. One highlight in the Chapel is a beautifully painted panelled ceiling, decorated with ornate bosses. The central boss depicts a falcon and fetterlock, the symbols of the Duke of York, who held the manor of Stamford.

Other bosses depict symbols such as a stag, a Tudor rose, a crowned head, an angel bearing a crown, and a Green Man amid foliage. The chapel ceiling was the gift of William Hikham, Alderman of Stamford, and his wife Alice. You can see an inscription commemorating their gift on the south cornice. Alice Hikham died in 1484 so it seems logical that the ceiling was installed shortly before then.

When we visited the east end of the church (chancel, north and south chapels) was roped off and impossible to access. That's a real shame, as it meant that visitors cannot get a good look at the Philips tomb, the statue of Our Lady, the 14th-century effigy, and the north chapel ceiling. 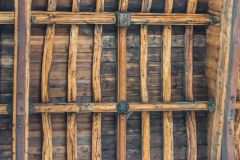 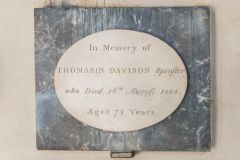 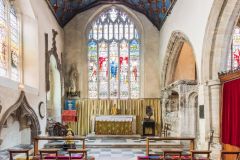 The Bluebell - 6 miles
Helpston, Cambridgeshire
From: £80.00