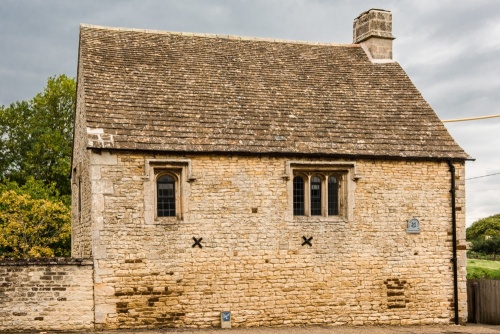 Also known as the Old Rectory, the Priest's House in Easton on the Hill is a small 15th-century building housing a museum of local heritage and village life. Among the exhibits are displays on the local slate industry and Collyweston stone.

The house was probably built by Thomas Stokke, who served as the parson of Easton on the Hill from 1456-1495. It restored by Sir Thomas Graham Jackson in the mid-Victorian period. The house is usually unattended, but there is a keyholder nearby and group tours may also be booked.

There are no historical records on exactly when the Priest's House was built, but we know from tree-ring dating that the timbers used in construction were felled between 1485 and 1499, during the time when Thomas Stokke (or 'Stokes' to use the modern spelling) was the parish priest.

Stokke was the brother in law of William Browne, a wealthy wool merchant of nearby Stamford and the man responsible for erecting Browne's Hospital in the town. After Browne's death, Stokke took over as administrator of the Hospital. 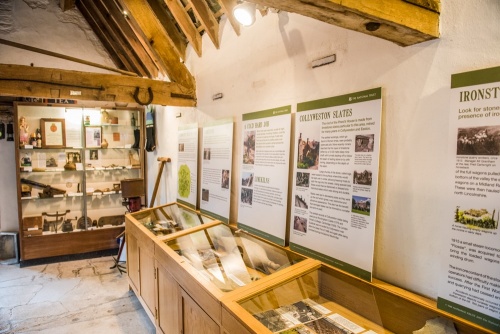 He was also a Canon of York and a very wealthy man in his own right, so it seems very likely that he built Priest's House to be a residence for a curate who could look after the parish church during his absences.

Stokke died in 1495 and left money to pay a chantry priest to say prayers for his soul. This priest would have lived in the Priest's House - at least until the bequest ran out of money. Chantries were declared illegal in 1545 so that is the latest date that a priest could have been resident here.

Sometime later the ceiling was raised and the house converted into a stable, and after that into a cattle byre.

In the late 18th century the house was used as a school by the Rev John Skynner, who served as the Rector of Easton on the Hill from 1764-1805. One of Skynner's pupils here was a nephew of the Marquis of Exeter. 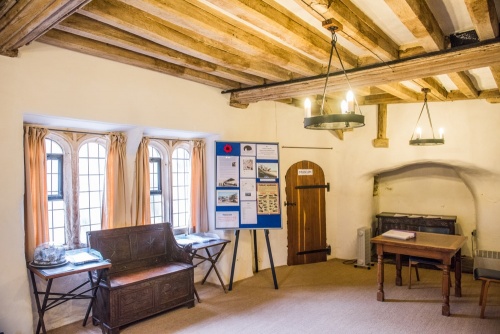 Reverend Skynner's son was Captain Lancelot Skynner, the captain of the HMS Lutine, which famously sank off Holland in 1799 while carrying a load of gold bullion. The gold has never been found and is still a target for treasure hunters. The ship's bell was recovered and it is now kept at the Lloyds insurance building in London where it is sounded to signal a major insurance loss.

In 1868 the house was restored by the architect Thomas Jackson, who added a high window opening so that hay could be pitched directly from a wagon to a storeroom on the first floor. From there it could be passed through a trapdoor to the cattle below. The house was used for cattle until 1959. It was saved from demolition by the Peterborough Society, which restored it and gave it to the National Trust in 1963.

Though the Priest's House is small, it is built to a very high standard - which says a lot about Thomas Stokke and his social standing. The ground floor is illuminated by four large arched windows with decorative roll-moulding and the north and south walls are braced with iron ties to counter the weight of the Collyweston tile roof. You can see that the cross beams do not fit the space between the walls because they lean outwards under the weight of the roof.

The well-preserved timber ceiling has roll-moulded beams. Most houses of this period had a central hearth and simply allowed smoke to filter upward through a hole in the roof but the Priest's House was built with a fireplace and chimney at the east end of the ground floor room.

The ground floor furniture is not original to the house; it was brought from other National Trust properties and dates mainly to the Tudor period. 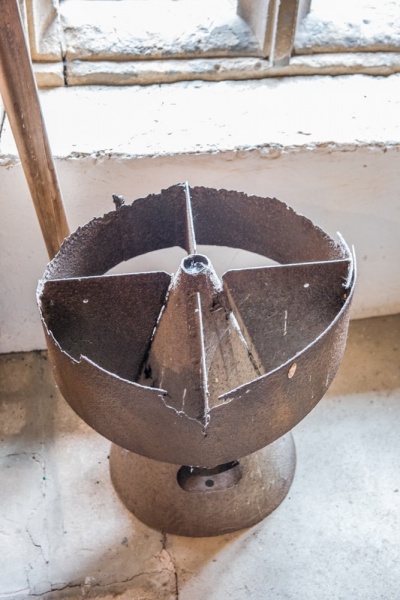 On the ground floor is an exhibit on the history of ironstone quarrying in Easton-on-the-Hill. Quarrying took place here from 1875-1920. One exhibit shows how the timber beams of Priest's House were dated using dendrochronology techniques.

A steep circular stair leads up to the first floor, which houses the exhibit on Collyweston slate quarrying and a wonderfully quirky display of local heritage items. Most of the items have been donated or loaned by local residents.

One obvious item is the funeral bier, last used in the 1940s. Against one wall is the tail fin or a German WWII bomb. The bomb killed one resident and the blast blew the roof off a house on High Street - which has a flat roof to this day. 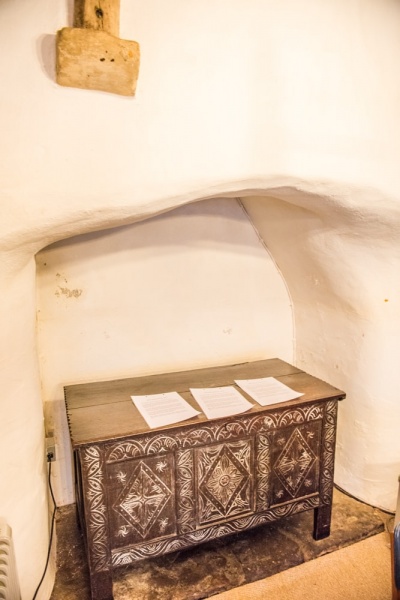 The 15th-century fireplace and chimney nook

One exhibit that caught our eye is a pair of hand made cricket boots and a cricket bag used by Stuart Rhodes, Captain of Nottinghamshire in 1935. Rhodes lived at The Limes in Church Street.

Not all the Collyweston slate exhibits are recent; one large slate dates to Roman times, a reminder that the qualities of the local slate were recognised by the Romans almost 2000 years ago.

Priest's House is small but is well worth a visit for the local heritage museum. It is a very good example of a 15th-century vernacular building. The house is signposted and easy to find, but be aware that there are no regular opening hours and you will need to get a key from the local keyholder. When we visited the keyholder proved to be just a 30-second stroll away on The Lane. 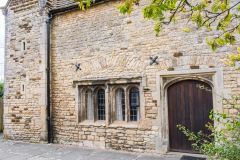 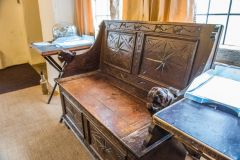 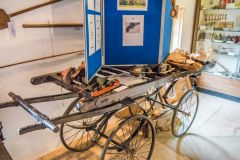 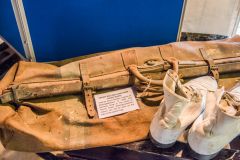 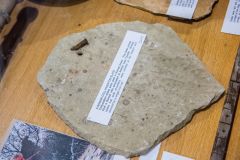 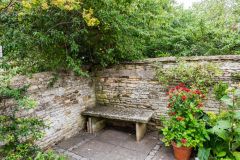 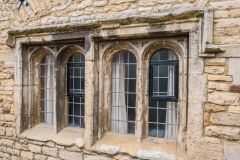 More self catering near Priest's House >>