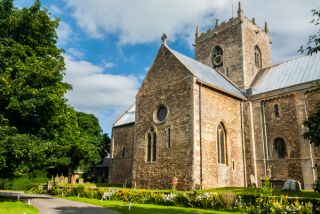 A very attractive village north-west of Lincoln. Stow is home to Stow Minster, a superb Saxon church, one of the finest in the country. Stow Minster was partly built under the patronage of Leofric, Lord of Mercia, and his wife, Lady Godiva (yes, THAT Lady Godiva!).

There was a settlement here in Roman times, which developed into a Saxon fortified settlement called Sidnaceaster. Stow formed part of the Saxon Kingdom of Lindsey, and that heritage is remembered in the current West Lindsey district.

Sometime before the arrival of the Danes in 870 AD a church was built to serve the Saxon town. The Danes burned that early church to the ground, and it remained a ruin until Bishop Eadnoth II rebuilt it in stone around 1040.

Stow Minster is one of the oldest parish churches in England and is sometimes called the 'Mother Church of Lincolnshire' and can with some justification be considered the mother church of Lincoln Cathedral. One of the most striking Saxon features are the tall, slender arches.

The main historic interest in Stow is the wonderful Saxon minster church. Aside from the Minster, there is the Cross Keys pub, and some attractive period buildings, including several thatched cottages.

On the small green by the Minster stands a fascinating relic; a set of 'Whipping Irons', or upright shackles attached to a post. One shackle bears the date 1789 and the initials W.H., possibly the local blacksmith who made the irons. The shackles are made with graded openings to take different sized wrists. Miscreants would be shackled to the ost and whipped for minor offences.

Just a mile west of the village lie the remains of a medieval palace of the Bishops of Lincoln, constructed in 1336. The scanty ruins lie beside Tillbridge Lane.

Nearby is the isolated ancient church at Coates (signposted from the centre of Stow). Don't confuse this Stow with the lost medieval village of Stow, near Billingborough. 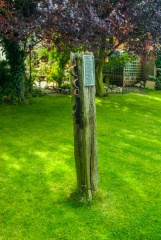 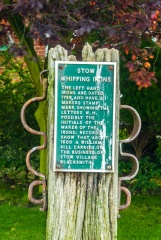 Close-up of the
whipping irons 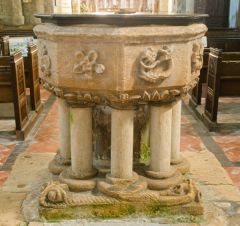 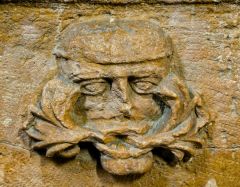 More self catering near Stow >>

More bed and breakfasts near Stow >>