HERITAGE HIGHLIGHTS:   Look for the Lincoln Imp carving, and the 'crazy vaulting' The third-largest English Cathedral, and undoubtedly one of the most enjoyable to visit. Lincoln Cathedral is one of the high points of Gothic architecture; a superbly harmonious showcase of decorative art. The west front, with its Norman arches set in a 13th-century screen, is quite simply stunning. The wealth of statuary detail alone is worth hours, if not days, of examination.

The history of Lincoln Cathedral goes back to 1073 when Bishop Remigus moved his see from Dorchester to Lincoln. It was Remigus who began the building, and some of his work can still be seen in the west front. A devastating earthquake in 1185 left the cathedral a shambles, but in the following year, a man who was to have a lasting impact on Lincoln and its cathedral came to the rescue.

That man was Hugh of Avalon, a Carthusian monk from what is now Switzerland. Hugh assumed the Bishopric of Lincoln and began a building program that was to transform the cathedral into one of the world's great buildings. The Lincoln Imp, in the Angel Choir

Under Hugh's direction, the east transepts and the choir were rebuilt, a project that was not complete until 1210. Between 1215 and 1255 the great transept, the Galilee, and the light and spacious chapter house were added, and the central tower was begun.

The chapter house was used by Edward I on three occasions to house meetings of Parliament. Between 1253 and 1280 the superb Angel Choir was built by Simon of Thirsk, in part to house a shrine to Hugh of Avalon, who had been canonized as Great St Hugh.

Hugh's memorial can still be seen beneath the watchful gaze of the Lincoln Imp. The imp, which later became the insignia of the city of Lincoln, is a fancifully carved figure of a horned devil. The story goes that the architects of St Hugh's shrine wanted to remind visitors of the dangers of evil, so they position this 'little devil' so it would look down over the left shoulder of pilgrims as they prayed at St Hugh's shrine.

During the Victorian period the Imp became a popular tourist attraction, and local jeweller James Usher, the founder of the Usher Gallery, is said to have made his fortune selling replicas of the Lincoln Imp to visitors. 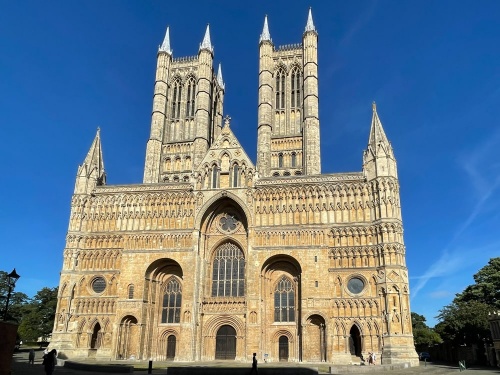 Back to the medieval period; in the early 14th century the central tower was finished, and the cloisters added, and by the end of that century the twin west towers as well. The central tower, which rises to 271 feet, was topped with a huge spire of wood encased with lead.

That tower stretched upwards to a staggering 525 feet, making Lincoln Cathedral the tallest building in Europe, and probably in the world. The central spires fell in 1548, and similar spires on the west towers were removed in 1807. The most common approach to Lincoln Cathedral is through the old Exchequergate on Castle Hill (beside the attractive, half-timbered Tourist Information Centre). We've mentioned the west front; the carving detail here is superb, with the early Norman doorway arches set in a later screen adorned with some of the finest Romanesque carvings in England.

Look up to the spires of the two west towers. Each is topped by a carved figure. That to the south is St Hugh of Avalon, Bishop of Lincoln. The northerly tower is topped by a figure of a shepherd boy playing his pipes.

The south porch is worthy of note for its superbly detailed carving. The porch door is a 'Judgement Portal', with a central figure of Christ flanked by richly carved angels, while about are arrayed souls rising to heaven or being dragged down to hell by demons. Just beside the porch are carvings of a king and queen thought to be either Edward I and Eleanor of Castle, or Margaret of Valois, his second wife.

The nave is awe-inspiring, with slender pillars of Purbeck marble rising up to the painted ceiling high above. The north and south transepts each boast a huge rose window filled with stained glass. These are the so-called 'eyes' of Lincoln. The south transept window is called the Bishop's Eye, and the window facing it at the other extremity of the crossing is the Dean's Eye. 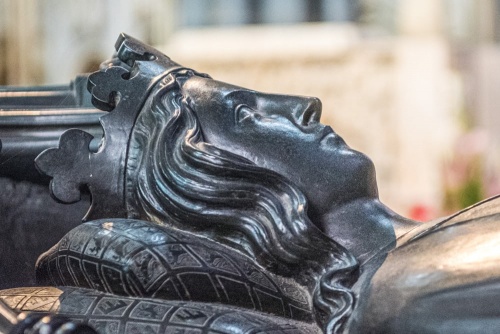 We've already made mention of the shrine of Great St Hugh in the Angel Choir. Three other memorials are worthy of note among the many in the cathedral interior. Near St Hugh's memorial is a Victorian tomb which marks the place where the entrails of Queen Eleanor of Castile, wife of Edward I, were buried. The queen's heart was buried at Blackfriars in Lincoln, and the rest of her remains in Westminster Abbey.

In the choir is the tomb of Catherine Swynford (1350-1403), mistress, and later wife, of John of Gaunt and sister-in-law to Geoffrey Chaucer. Opposite Swynford's tomb is a memorial to Mary, Queen of Scots.

Outside the Chapter House stands a statue to one of Lincolnshire's favourite sons, poet Alfred Tennyson. A few steps away from Tennyson's statue is Priory Gate. In 1285 a pair of gateways were erected at the east end of the cathedral precinct. This gate, erected in 1816, was a replacement for the medieval ones.

If you walk down Pottergate you can view a fine medieval gate, now in the middle of a traffic island. Along Pottergate are several lovely old Tudor and medieval houses. The houses that ring Minster Yard are also worth a closer look. Those nearest Exchequergate are beautiful Georgian buildings. Or if you prefer something a bit older, the medieval palace of the powerful bishops of Lincoln stands just a few steps from the south porch of the cathedral.

I highly recommend Lincoln Cathedral (and indeed, the entire city of Lincoln). You can easily fill a day, or two, or three, simply enjoying all the old historic sights of the city. 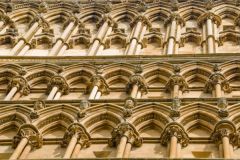 More self catering near Lincoln Cathedral