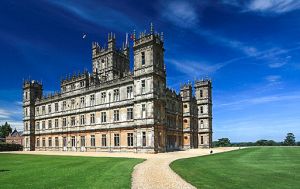 Highclere Castle
An extravagant Georgian mansion, home of the Earls of Caernarvon, rebuilt by Charles Barry in exotic Victorian Gothic style. Highclere boasts a suite of opulent state rooms, and an exhibit of Egyptian artefacts, for the fifth Earl was an enthusiastic backer of Howard Carter, the archaeologist who discovered the tomb of Tutankhamen.

The Bishops of Winchester owned the Highclere estate as early as the 8th century, and the manor was recorded in the Domesday Book. During the medieval period the Bishops established a palace at Highclere, but after the Dissolution of the Monasteries the estate passed into private hands.

In 1679 the Earls of Caernarvon purchased the property, and it has been in the same family ever since.

In the early 17th century Robert Herbert established the landscape gardens and built the neoclassical temples that are a feature of the grounds. He also began to collect fine art, beginning the important collection of paintings that is one of the most appealing features of visiting Highclere.

The 1st Earl of Caernarvon called upon Capability Brown to design a fashionable landscape garden from 1774. Brown's sweeping design required the entire village of Highclere to be moved to its current location. One of the garden features are Cedars of Lebanon thought to have been planted from seeds brought from Lebanon by the 17th century seed collector Edward Pococke.

In 1839 the 3rd Earl of Caernarvon decided to remodel his family home. He called upon Sir Charles Barry, fresh from rebuilding the Palace of Westminster in London. Barry designed an extravagant new mansion in a mix of Elizabethan and Jacobean style, with several striking towers reminiscent of the new Houses of Parliament. Barry himself called Highclere Anglo-Italian, and there is no doubt that he was influenced and inspired by Italian Renaissance architecture.

Whatever the influence, the result is unlike anything else in England, an unusual mix of traditional 'Jacobethan' and Italian style. The most obvious meeting of styles is the saloon, designed to recreate the atmosphere of a medieval great hall, with a hammerbeam roof and Gothic arches.

Both the 3rd Earl and Barry died long before the house could be completed and it was left to Barry's assistant Thomas Allom to finish the interiors for the 4th Earl.

It was perhaps the 5th Earl who left the greatest mark upon Highclere. The Earl was an enthusiastic Egyptologist, and sponsored several archaeological expeditions to Egypt in the early 20th century. The most famous expedition in which the Earl had a hand was the one led by Howard Carter in 1922, when Carter discovered the long-lost tomb of Tutankhamun. There is a special exhibition at Highclere of Egyptian objects from the 5th Earl's travels, and a display telling the story of his involvement in the discovery of 'King Tut's' tomb.

The house has been used for numerous film and television episodes over the years, but it was one TV series in particular that brought Highclere to public attention; from 2010 Highclere has been used as the setting for Downton Abbey. The great hall and several of the bedrooms are used regularly, though some interior scenes are actually filmed at a studio in London, though the sets resemble rooms at Highclere. The success of Downton Abbey has enabled the family to make essential repairs to the house, which was in a poor state of repair before the TV series made the location so appealing to new visitors.

Highclere is usually open during the summer months and on a few specified weekends throughout the year. Due to the popularity of the property since the launch of Downton Abbey, the house has created a pre-booking scheme. You don't have to pre-book, but it is a good idea, especially at the height of summer. See the official website for pre-booking details. You can always show up on the day, but without a pre-booked ticket there is always the possibility that you might not get in.

Garden: Huge cedars grace the parklands designed by 'Capability Brown'. Features include a walled gardens, a Victorian yew walks, an orangery and fernery.

More self catering near Highclere Castle >>