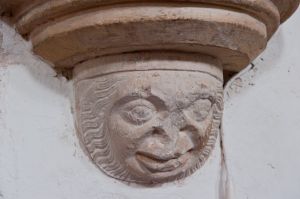 St Wilfrid's church in Ottringham dates to the 12th century, but the current building is largely 13th and 14th century. The tower arch and interior corbel heads remain from the 12th-century church. Some of the corbel heads are extremely amusing, with grotesque expressions.

The nave features a very fine king-post roof with carved bosses, and the nave floor is filled with Georgian box pews. There is a royal coat of arms over the tower arch, and a 13th-century piscina in the south wall of the nave, which indicates the location of a chantry chapel established by Richard of Ottringham on a license from Edward I.

And therein lies a story. In the late 13th century Bridlington Priory provided priests to Ottringham, and Richard naturally wanted the Priory to provide a priest for his chantry, to say prayers for his soul and the souls of his family and ancestors.

Edward I, however, had bigger fish to fry. The king was involved in negotiations with the Abbey of Meaux to acquire their land at Wyke, on the River Hull. To sweeten the deal he offered Richard's endowment to Meaux. The Abbey agreed, and it was they who provided the priest for Richard's chantry at Ottringham.

The king got his hands on Wyke shortly after, which was renamed King's Town upon Hull. The name was soon shortened to its more familiar form, Kingston upon Hull. So you could stretch a point and say that the town of Kingston upon Hull owes its establishment to the chantry chapel of Richard of Ottringham.

One of the more interesting features of the interior is one of the most modern. The large east window has lovely stained glass, inserted in 1949 in memory of Leonora Wright.

The glass tells the story of the Birth and Growth of the Christian Church in four panels, though it is quite interesting which historical events are included; the final event, presumably the evolutionary culmination of Christianity, is the appearance of John Keble at St Mary's, Oxford - not an event that would make everyone's top four of all time!