HERITAGE HIGHLIGHTS:   The great east window is a medieval marvel 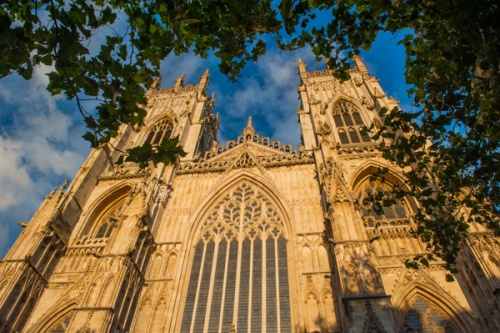 The first York Minster dates back to the year 627. Bishop Paulinus accompanied the Christian princess Ethelburga of Kent when she came north to marry Edwin of Northumbria. Edwin was convinced to convert to Christianity, and Paulinus baptised him in a church especially constructed for the purpose. This rude wooden church, of which nothing remains, is regarded as the first York Minster. This first church was rebuilt in stone a few years later, and dedicated to St. Peter. 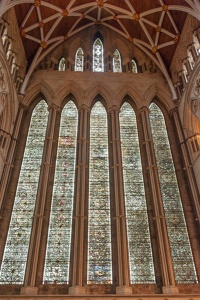 This church was itself rebuilt by St. Wilfrid around 670, but it was Egbert (732-766), the first recognised Archbishop of York, who made the cathedral school and library the envy of Europe. The Minster Church burned down in 741, but it was replaced by a glorious new church containing no less than 30 altars.

The next few centuries were ones of turmoil in York, as the city was held by the Danes, Saxons, Norse, and English in turns. The pagan invaders left the church alone, and one Danish king, Guthfrith, converted to Christianity and was buried in the Minster in 895.

A subsequent archbishop, Ealdred, was responsible for crowning William the Conqueror in London. Ealdred was buried in the Minster in 1069, and just a few days later the church was badly damaged in a struggle between the Danes, Normans, and Saxons.

The city of York and the Minster suffered greatly during William's "Harrying of the North", but they suffered more when a Danish invasion destroyed the church completely in 1075. The new Norman Archbishop of York, Thomas of Bayeux, rebuilt the Minster. beginning in 1080. The foundations of this first Norman church can be seen today in the Foundations Exhibit.

In 1137 the Minster suffered severe fire damage yet again. The choir and crypt were rebuilt beginning in 1154, and a large chapel dedicated to St. Sepulchre was added to the nave. But by this time the Norman Minster was decidedly out of step with the new Gothic fashion then sweeping Europe.

A slow makeover of the Minster began in 1220 with the South Transept, followed by the North Transept. The styles of these transepts are quite unique, though they were built only a few years apart.

The North Transept is famous for its "Five Sisters"; five graceful lancet windows topped by five smaller gabled lancets. A great central tower was built at the same period as the transepts, but this collapsed in 1407. The delicate Chapter House, where the day to day business of the Minster was run, was begun in about 1260. It is a superb example of the Gothic Decorated style which was then in vogue. 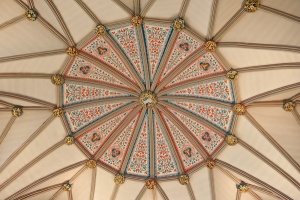 The ribbed wooden roof is truly a masterpiece of medieval architecture, and the traceried stained glass windows put even the Five Sisters to shame.

The old Norman nave was rebuilt, beginning around 1280. The new nave was exactly twice as wide as the old, making it the widest in Europe and the second tallest (after Westminster Abbey) in England. The last surviving part of the Norman cathedral, the choir, was rebuilt in 1395.

Richard Scrope was appointed Archbishop by Richard II in 1398. Scrope then rebelled against Richard's successor, Henry IV in 1405, but he was captured and executed before the walls of York.

A new central tower was begun in 1420 to replace the one which collapsed in 1407 (see above). In 1472 the work of rebuilding the Minster was declared complete and the Minster was rededicated. York Minster suffered heavily during the English Reformation and its aftermath; the chantry chapels and altars were torn down under Edward VI, and much of the cathedral plate was lost.

But this was nothing compared to the depredations suffered under Elizabeth I. The interior of the Minster was stripped of its tombs, funereal brasses, memorials, altars, vestments, coats of arms, and stained-glass portraits. 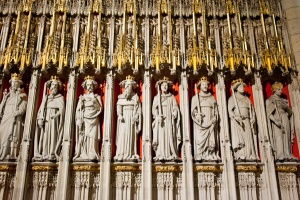 The city of York was besieged by Parliamentary forces during the Civil War. When the city surrendered after the Battle of Marston Moor, the parliamentary forces held a service of thanksgiving in the cathedral. The building was spared damage due to the influence of Thomas Fairfax, Cromwell's general, who was a native of Yorkshire.

But the building was not safe from the onslaught of changing fashion. In 1730 Lord Burlington designed a new floor for the Minster in the neo-classical Palladian style. The new marble floor required the destruction of every tomb left in the nave and many in the transepts and choir as well.

The building suffered from further fires in the Victorian period, and the ravages of time have necessitated ongoing repair work during the 20th century, but York Minster retains the allure of its rich history and marvellous architectural heritage. 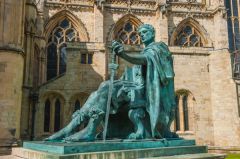 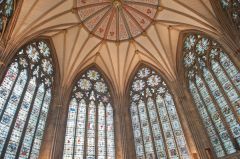 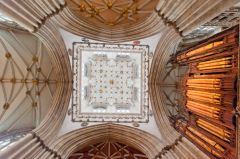 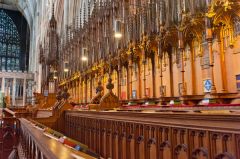 More self catering near York Minster