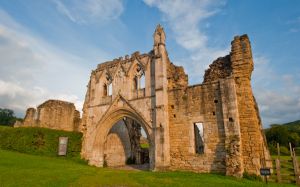 Kirkham Priory
Kirkham Priory was founded as an Augustinian monastic house around 1120 by Walter Espec, Lord of Helmsley. It is rather surprising to consider that in its heyday, Kirkham Priory rivalled Rievaulx Abbey as one of the largest and wealthiest monastic settlements in the north of England. However, that heyday did not last long, and by the late 13th century Kirkham was deeply in debt. Somehow the monks held on until the priory was finally dissolved by Henry VIII.

The elaborately carved late 13th-century gatehouse front is one of the best-preserved parts of the priory site. On the gatehouse, you can see the heraldic arms of the De Roos family, lords of Helmsley and priory patrons. Other coats of arms carved on the gatehouse include the de Clare, Vaux, Fitz-Ralph, Scrope, de Fortibus, and Espec families, and the arms of England. Nearby are the partial remains of a 14th-century cross.

The most extensive remains are those of the 12th and 13th-century priory church, which forms the north cloister range. Further remains include the 13th-century chapter house, dorter, guest house, and kitchens.

Though some of the priory buildings have been reduced to mere foundation walls laid out on the turf, many parts of the buildings still stand to a good height and hint at the full size and grandeur of the original buildings. Elaborate stone carvings decorate the window frames of a high wall at the east end of the church.

One interesting feature is the west cloister wall. This stands on a terrace, so that the exterior of the wall is much higher than the interior face. The exterior wall shows wonderful blank arcading. This wall was used for climbing exercises by British forces training for the Normandy invasion during World War II.

English Heritage informational plaques tell the story of Winston Churchill's secret visit to Kirkham Priory during WWII, and the role that the priory played in the lead-up to the D-Day landings. In 1944 Allied troops used the area around Kirkham to test 'wading' vehicles intended for use in the Normandy landings. Churchill and King George VI visited the priory to inspect the troops and see for themselves the progress made in preparing for the landings.

The location of Kirkham Priory is simply stunning; it is situated on a sloping plateau above the River Derwent, a short distance above a graceful, arched bridge. On both sides of the river the hills rise up wooded, green slopes to create a natural amphitheatre for the priory remains. In fact, so sloped was the site chosen for the priory that the monks had to create manmade terraces for many of the monastic buildings.

Verdict: This is a wonderfully scenic medieval site, and well worth a visit. Bring a picnic and dine in splendour overlooking the peaceful River Derwent, just like the monks of Kirkham did so long ago!

More self catering near Kirkham Priory >>