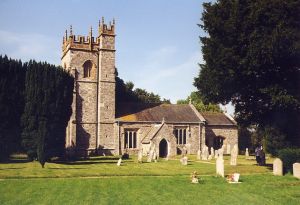 Affpuddle
A small village in rural Dorset, set in the valley of the Piddle, about 11 miles north of Dorchester. There are several thatched cottages in the village, as well as a lovely 12th-century parish church dedicated to St Lawrence.

The church boasts some well-carved 16th-century pews and a contemporary carved pulpit. The church has two 12th century fonts, one brought here from the church at Turners Puddle.

The village dates back to the late Saxon period. at the time of the Domesday Book, it was called Affapidela, and the manor was held by the abbot of Cerne, also in Dorset.

After the Dissolution of the Monasteries, the manor passed to the Lawrence family, who later married into the Washington family, ancestors of the first American president, George Washington. Look for the Washington arms quartered with the Lawrence arms on a monument inside the church.

One of the early Lawrence holders of the manor was Edward Lawrence, who was interested in agricultural reform, and in the early 17th century experimented with flooding fields to create watermeadows.

There are several attractive cob house with thatched roofs, dating from the 16th and 17th centuries.

Nearby is Tolpuddle, known for its place in the early history of trade union development. The Frampton family held the manor of Affpuddle at the time of the Tolpuddle Martyrs affair, and they were heavily involved in the case against the Martyrs.

More self catering near Affpuddle >>

More bed and breakfasts near Affpuddle >>