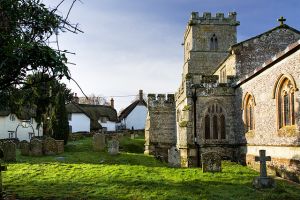 Tarrant Hinton is a picturesque rural village, of the sort that Dorset seems to specialise in. The parish church of St Mary is a beautiful 13th-century building with a Norman font and a superbly carved Easter Sepulchre. Nearby is Chettle House, designed by Thomas Archer, a manor in the Queen Anne style which is set in beautifully landscaped gardens.

The church is set in an idyllic location, surrounded by pretty thatched cottages. The 15th-century tower is heavily decorated with grotesque carvings and a battlemented top. The south door shows traditional Norman zigzag carving motifs. The chancel, by contrast, is pure Victoriana, the result of remodelling in 1874.

The exception to the 19th-century style is an ornate early 16th century Easter Sepulchre, bearing the initials TW, for Thomas Weaver, who served as rector from 1514-1536. The style suggests the Sepulchre was created late in Weaver's tenure.

The Easter Sepulchre is thought to be unique in Dorset. The lectern is a wonderful example of Art Nouveau style, crafted in 1909 from iron and brass. The Norman font is made of local Purbeck marble and is topped by a 17th-century oak cover.

Other historic highlights in Tarrant Hinton include Old Turnpike Cottage, built around 1840, and the Old Rectory, built in Tudor style by architect Benjamin Ferrey in 1850. Much older is Crossways House, a 2-storey 16th century thatched dwelling of cob and brick.

Excavations in the parish, near Barton Hill Dairy, uncovered remains of a Roman villa, and there is evidence of an Iron Age settlement on Tarrant Hinton Down. Several miles away is Pimperne Long Barrow, one of the best-preserved burial mounds in the West Country.

Despite all these heritage sites, Tarrant Hinton is best known today for one thing; the Great Dorset Steam Fair, the largest steam fair in Europe, which annually draws a huge variety of steam-powered vehicles and fairground rides.

More than just a display of vintage equipment, the GDSF boasts an enormous 600 acres of vehicles, rides, and entertainment, showing how people lived, played, and worked using steam-driven tools and equipment. Its a five-day feast of nostalgia which draws upwards of 200,000 visitors to this otherwise sleepy village! 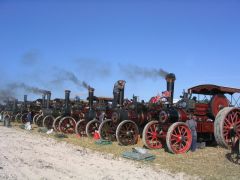 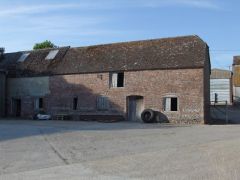 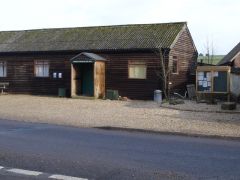 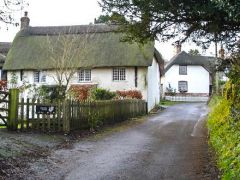 More self catering near Tarrant Hinton >>