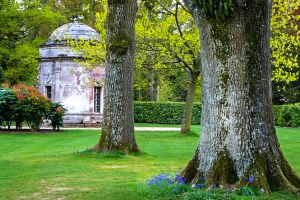 Larmer Tree Gardens
Taking their name from a famous tree on the ancient boundary between Dorset and Wiltshire, the Larmer Tree Gardens were the 1880 creation of General Pitt Rivers and are perhaps the first privately created garden intended from the start for public enjoyment.

In 1880 Augustus Lane Fox inherited the Rushmore estate, on the border of Dorset and Wiltshire. One condition of the inheritance was that Fox should change his name to Pitt Rivers. This he did, and almost immediately began an ambitious programme of planting, laying out what he called the Larmer Tree Pleasure Grounds.

The name needs a bit of background; the Larmer Tree was an old Wych elm standing on the border of Wiltshire and Dorset, perhaps as early as the 10th century.

The tree entered the history books in the reign of King John when the king and his courtiers rested under its spreading leaves while out hunting. The original Larmer Tree still stood in 1894, but when it was deemed too decayed to survive an oak was planted within its decaying trunk.

Pitt Rivers intended his garden to be a public space from the very start. He designed the garden layout to include buildings aimed at educating and enlightening visitors. One of the buildings acquired later was the Nepalese Room, which he bought after it was used at the British Empire Exhibition in 1898.

In addition to the pleasure gardens, there was a racecourse, golf course, tennis courts, and a bowling green, as well as 8 picnic areas enclosed within hedges of cherry laurel, as well as thatched buildings if the weather turned bad.

Not only did he provide the picnic buildings, but Pitt Rivers also provided free cutlery, crockery, chairs, and tables for public use. There was a Singing Theatre for public performances of poetry and theatrical productions using estate workers as cast members. There were open-air dances and a band on Sunday afternoons. In short, it was as enjoyable a public space as Pitt Rivers could make it.

And it certainly became popular; by 1899 over 44,000 visitors came to Larmer each year. Novelist Thomas Hardy came in 1895 and described an evening concert as 'Quite the prettiest sight I ever saw in my life'.

General Pitt Rivers died in 1900 and the gardens closed to the public except for special occasions. Then in 1991, the General's great-grandson began the garden restoration. Though many of the original Victorian buildings have been lost, some still remained, and modern visitors can take a step back in history and enjoy a wonderful piece of Victoriana in a superb setting within Cranborne Chase

Larmer was first privately owned gardens to be opened to the public for their enjoyment. The 11 acres of pleasure grounds contain an interesting collection of Victorian buildings, from a Roman temple to the Nepalese room. From the main lawned area laurel hedges radiate outward to create long rides, leading to woodland.

Camellias and Rhododendrons brighten the woodland spring, while hydrangeas and Eucryphias are striking in midsummer. Lovely autumn colour provides year-round interest for the visitor.

One of the enjoyable features at the Larmer gardens is that many of the original Victorian buildings have survived. You can see the Roman Temple, the Nepalese Room, and the Colonial pavilion that once acted as a tea room. Peacocks roam freely, and you're certain to catch sight of one of the resident macaws.

There is an extremely large stand of broad-leaved woodland, all that remains of a site where hazel wands were produced for centuries by traditional coppicing methods.