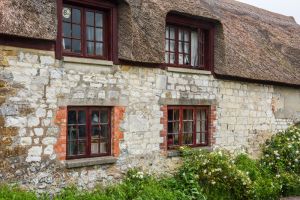 The name of this isolated village gives a clue to its history. The 'fratrum' refers to the brothers, or brethren, of the Knights Hospitaller of St John, who owned the manor during the medieval period. A thatched farm building is thought to have been the brother's refectory. The Toller part of the name refers to Toller Brook, now renamed as the River Hooke.

The manor house is 17th century, and was built on the site of the Hospitaller's house. It was built by John Samways after 1540 and is one of the most interesting examples of 16th-century domestic architecture in Dorset. Look for the ornate Tudor chimney stacks with the traditional barley twist shapes, ornamented with carved figures including a monkey holding a hammer.

The west part of the house was rebuilt by Sir Francis Fulford, who married Samways' daughter. The thatched stable of the farmhouse originally served as the refectory for the brethren.

The simple church, dedicated to Basil the Great, is 12th century, with much Victorian rebuilding. It is one of only 3 churches in England dedicated to this saint, who is much more widely regarded in eastern Europe. It features an elaborately carved font dating to the late Saxon or early Norman period.

The exterior of the font bowl is exquisitely carved in relief, with scenes from the Bible, including St Michael leading souls out of Hell, and Moses saving the Israelites.

There is also an 18th-century altar rail and a fragment of a medieval carved panel depicting St Mary Magdalene washing the feet of Christ. Unfortunately, the church was closed for regular worship in 2013, not surprising when you consider that Toller Fratrum is little more than a hamlet, but still a great shame for visitors to the church.

More self catering near Toller Fratrum >>