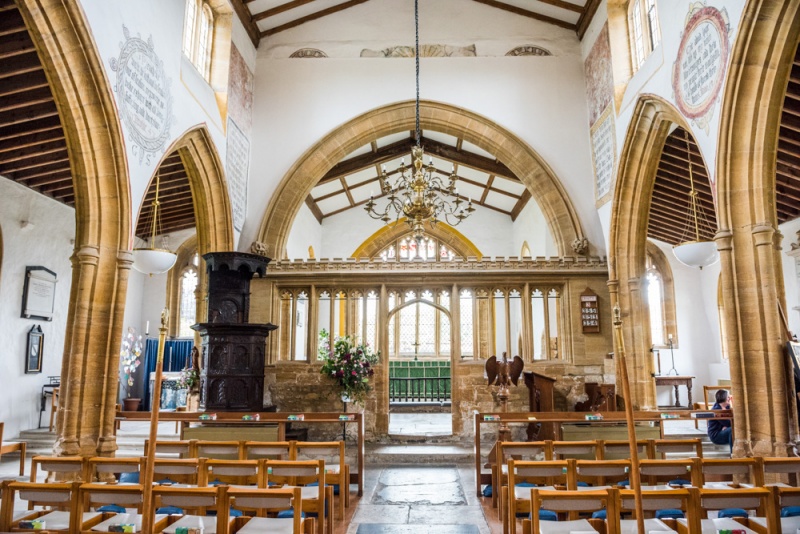 The village of Cerne Abbas grew up around Cerne abbey, founded in AD 987. The villagers probably worshipped at the abbey church until the year 1300, when the abbey built a parish church for their use. That early 14th-century building was enlarged in 1450 with the addition of aisles.

The tower was added in the late 15th century and is decorated with grotesque carvings. Look for a gargoyle near the south porch that acts as a chimney outlet for a fireplace in the priest's room.

Over the porch entrance is a medieval carving of the Virgin Mary and the Christ Child.

The oldest part of the church is the 14th-century chancel. Look for a pair of original lancet windows by the altar, and a 14th-century piscina set into the south chancel wall. One either side of the altar are faded medieval wall paintings. On the south side is the Annunciation, while on the north is a series of four scenes from the life of St John the Baptist. There are more very faded wall paintings in the nave.

The nave walls are covered with a fascinating series of Biblical texts made in 1679. Church records show that they were painted by an artist named Robert Ford, who was paid 12 guineas for his work.

The font is 15th century, mounted on a modern base. It is topped by a painted wooden cover added in 1963. The informative church guidebook is proud to claim that Queen Elizabeth, the Queen Mother admired the font cover when she made an official visit to the village. 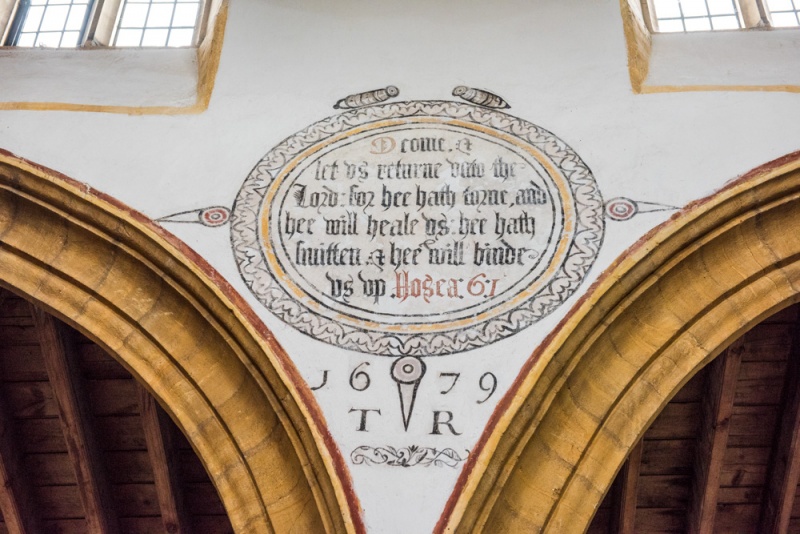 The beautifully carved pulpit and tester was made in 1640. The chancel screen is 15th century, with an arch inserted in 1870 so that worshippers in the nave could see the high altar. Over the arch is a royal coat of arms to Charles II, and three painted panels depicting the Ten Commandments.

Between the nave and tower is a later wooden screen, built in 1749.

The east window is 15th century, and may have been brought here from the abbey church when Cerne Abbey was dissolved by Henry VIII in 1539. It appears to be the upper section of a much larger window. In the stonework at the lower left of the windows is the date 1639, possibly commemorating when the window was installed. The glass depicts coats of arms to the local Brownyng family. 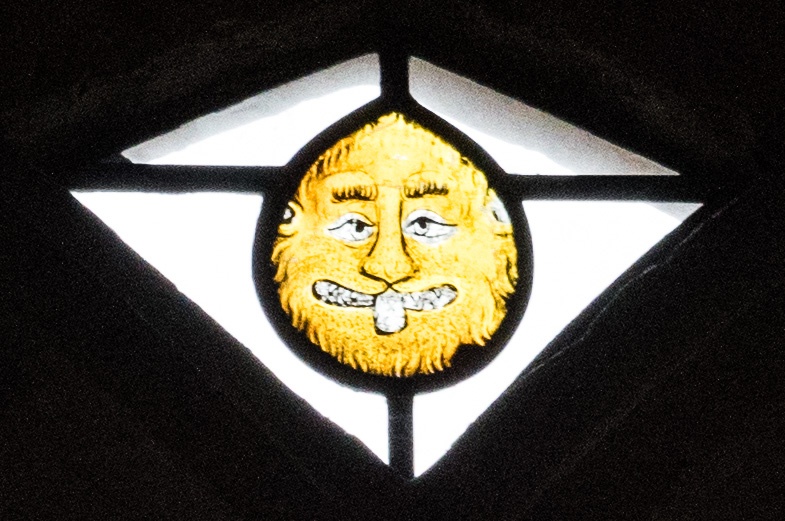 Another fascinating piece of old glass is set into the central window on the south wall. It shows a lion sticking his tongue out. It dates to the late 14th century and is thought to be a patriotic symbol, as England was engaged in the Hundred Years War with France during this period.

Above the nave is a clerestory added in 1530 by Thomas Corton, the last Abbot of Cerne Abbey. Look for the TA initials on two of the windows.

One very unusual feature is a pair of painted wooden memorial panels. One hangs in the north aisle, and the other by the porch door. One commemorates William Cockeram, who died in 1679. The epitaph describes him as 'a practioner in phisick and chirurger (i.e. a doctor and surgeon). The other wooden board commemorates four members of the Watson family, who died from 1661-1670. The eldest was the brother and the three youngest were the children of Samuel Watson, pastor of Cerne Abbas church from 1654-1672.

American visitors may want to look for a pair of memorial brasses set into the nave floor. They commemorate members of the Notley family, who were among the first settlers in the American colonies. The Notleys owned the site where Capitol Hill now stands in Washington DC. They called it Cerne Abbey Manor after their home village.

St Mary's is a beautiful historic building, full of interest, and it stands on one of the prettiest villages in Dorset. 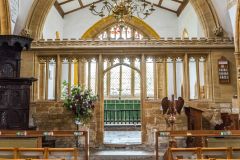 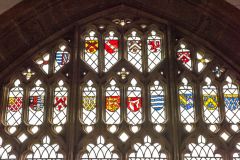 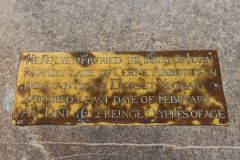 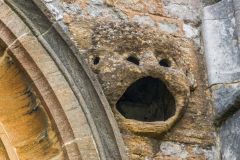 More self catering near Cerne Abbas