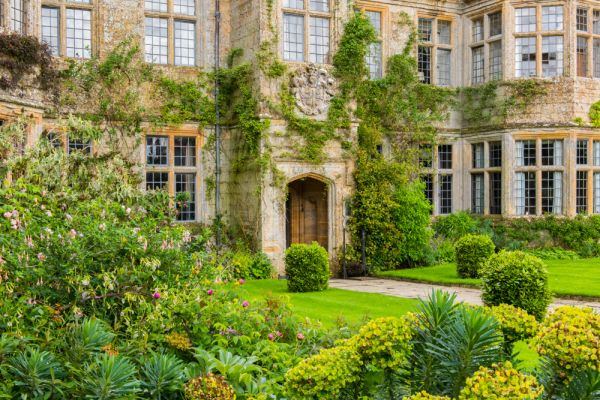 The delightful manor of Mapperton sits atop a long rise, dominating views across a lovely Italianate garden. The house is largely a product of the 1660s, though earlier Tudor elements have survived, and the north front is in the classical style. The church of All Saints forms the south wing of the house.

The upper garden is constructed in terraces edged by brick and concrete and dotted throughout with topiary of yew and box. The gardens descend a slope to fish ponds, an arboretum, and a shrub garden. 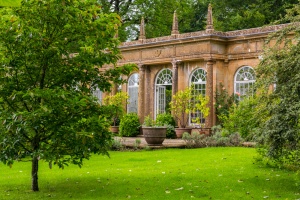 The gardens are laid out on three levels. Close to the house is the upper level, an Italianate terrace designed by Ethel Labouchere in the 1920s in memory of her husband. Below the Italianate garden is a lower terrace with a 17th-century fishpond, and summerhouse, and beyond a second fishpond is a wild garden area planted with specimen shrubs and trees. A circular trail leads through this wilderness area, running beside a stream before looping back towards the formal gardens via a Magnolia walk.

The house is home to the Earl and Countess of Sandwich, but the history of the estate goes back well over a thousand years. Mapperton was recorded in the Domesday Book of 1086 when it was owned by the Sheriff of Somerset. For the next 900 years, the estate was owned by just 4 families until it was purchased in 1919 by Ethel Labouchere, who designed the formal garden.

The oldest part of the picturesque manor house dates to the 1540s. In the 1660s Richard Brodrepp rebuilt the Tudor house and added the striking west front as well as the dovecote and stable blocks near the visitor parking area. The settlement around the manor seems to have been much larger in the medieval period, but a large number of houses were pulled down in the 1660s and since then the population has remained unchanged.

The best-preserved historic features of the house include elaborate plasterwork ceilings, panelling, and fireplaces, with heraldic beasts and fleur-de-lys symbols decorating the great chamber on the first floor. The interior of the house is furnished with 'the Sandwich collection' of fine paintings including works by famous artists such as Lely, Hogarth, and Sir Joshua Reynolds. 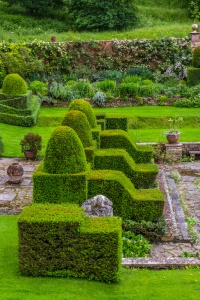 Topiary in the Italianate garden

There are several portraits of the most famous Earl of Sandwich, the 4th Earl, who sponsored Captain Cook's voyages and served as First Lord of the Admiralty but is best known for inventing the humble sandwich. The first Earl made perhaps a greater contribution to history; he served under both Oliver Cromwell and Charles II and acted as the restored monarch's first general-at-sea.

More importantly, he encouraged his cousin Samuel Pepys to reorganise the daily operations of the navy. This naval heritage is depicted in several models of ships and naval paintings from the Earl's lifetime.

The house and grounds have featured in several motion pictures, including Tom Jones, Emma, and Restoration.

If you come from the south (Bridport direction), be aware that the lane from Melplash to Mapperton is extremely narrow, with few passing places. Though technically it offers a more direct route, I found that it was actually faster to go to Beaminster and take the signposted route along the B3163 before branching south on the lane to Mapperton. So now you know.

To reach the parking area you have to drive directly past the front of the manor house and park opposite the tea shop.

I asked at the ticket office, which doubles as a shop, about visiting the historic church that is built into one wing of the house. The church is normally closed but they were happy to give me the key so I could explore the church before visiting the gardens. It is a fascinating medieval church, and I highly recommend leaving time for a brief visit.

As for the gardens, they are a delight. The way the terraces are laid out below the house you get a wonderful view of the upper Italianate Garden and orangery before you descend a set of steps down to the garden level. From this upper level, you descend more steps to a lovely fishpond lined with carefully sculpted topiary trees, and yet another small fishpond lies below that. The upper pond terminates in a lovely little summerhouse, and the combination of pond and picturesque building reminds me of the famous pond at Bodnant Garden in Wales.

Beyond this formal area trails run down the valley through a wilderness area, with large trees planted on either side of a stream.

My favourite part of the garden is the Italianate terrace, a beautifully laid out area of statues, a fountain, sundials, urns, and colourful plantings that evoke a sense of romantic classicism. It is an absolute delight to wander through this area, with the orangery at one end and the historic mansion overlooking the scene from atop the hill. 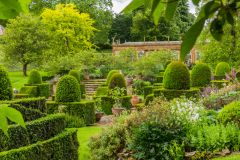 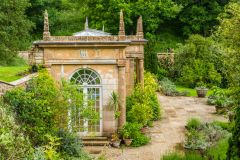 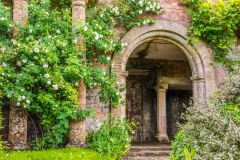 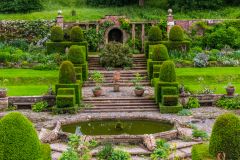 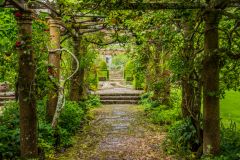 More self catering near Mapperton House