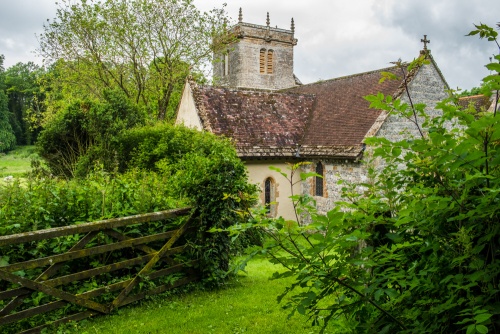 A rural church just north of Dorchester, All Saints stands beside the late 17th-century manor house on the bank of the River Cerne. The church is built of banded flint and stone and dates primarily to the 13th century. The chancel and pinnacled west tower are 15th-century work, and the tower is ornamented with carved angels.

The parish of Nether Cerne was owned by the monks of Cerne Abbey until the Reformation. Together with the manor house, Nether Cerne church forms a lovely picture in a delightful countryside setting. 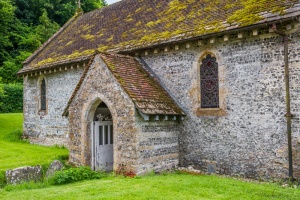 The interior features an unusual 12th-century font of Purbeck marble in an oval rather than circular shape. The base of the font is later, perhaps 14th century.

The exterior is worth examing for the eight carvings of angels bearing Gothic texts on the 15th-century tower. The carvings are unusual in that tower gargoyles in Dorset are unusually demons or grotesque beasts, but these are quite angelic figures.

The interior of the church has only a few furnishings of historic interest. The unusual font is worth noting; the bowl looks as if it has been scalloped.

The oldest memorial is a grave slab to John Damer, dated 1685, set in the floor under the arch that leads to the south transept. The inscription on the slab was so worn that I walked back and forth over it several times before realising it was a gravestone!

This may be the same John Damer whose wife is buried at Godmanstone. Apparently, Damer himself was denied burial with his wife because he was known as a prominent Dissenter. Damer was the great-grandfather of the Earl of Dorchester. The inscription on the stone is so badly worn as to be indecipherable, but thankfully a historic survey in 1951 recorded it. It reads;

His will was to be layed with his dear wife
When he by Death's stroke was bereft of life,
The souls of both are in eternal joy
Their bodys freed from what did them anoy
Tho humane force have thus their bodys parted
They rest in peace, both being upright hearted.

I'm not sure I've ever heard of someone being 'upright hearted' before, but it sounds good!

If you examine the tower arch you will find carvings of an owl and an unknown beast (both now missing their heads), and a pair of angels holding shields. The 14th-century south transept arch gives access to a chapel dedicated in 1396 to the East Anglian saint, Etheldreda.

The church is no longer in regular use and is cared for by the Churches Conservation Trust.

If you rely on a satnav and the official postcode, beware! My satnav directed me to a nearby farm, rather than the village itself. Take the road signposted to Nether Cerne off the A352 north of Charminster. The road peters out after a few hundred yards but there is space for several vehicles to park off the road and a signposted path to the church.

The setting is simply idyllic, with sheep grazing in a farm field and the church nestled beside a picturesque manor house. While I was walking around the church exterior, I met the owner of the manor house, who told me what a wonderful place it was to live. I believe her!

The church is open daily to visitors. 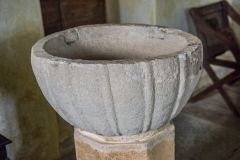 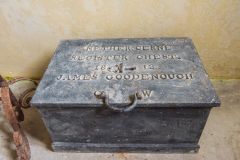 More self catering near Nether Cerne, All Saints Church >>

More bed and breakfasts near Nether Cerne, All Saints Church >>