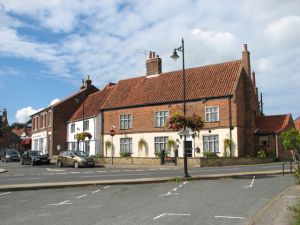 Acle Manor House
Acle is a small market town on the edge of the Norfolk Broads. The village was a trading port in Roman times, but now Acle is well inland of the sea. The church of St Edmund may date to Saxon times, with the addition of a 13th-century nave. The partial ruins of 13th century Weybridge Priory stand near Acle Bridge.

The bridge played a large role in Acle's history; for centuries it was the only way across the river Bure between Great Yarmouth and Wroxham. You would guess it from the present landscape, but the village was at the centre of a large forest. In fact, the name comes from 'oak lea', a clearing in an oak forest. Most of the trees have gone, many of them cut down to make ships for Elizabeth I's ships.

The history of the village goes back to at least Roman times when it was a busy port at the head of an inland waterway called Gariensis by the Romans. The waterway gradually silted up, and Acle has not been a port for centuries.

The church of St Edmunds is one of 124 surviving round-tower churches in the county. The tower is the oldest part of the church and may date to some time between AD 850-950. It is capped with an octagonal stage added in the 13th century. The font dates to 1410, and near the pulpit is a fragment of a medieval wall painting depicting a dragon.

One of the more peculiar iconic sites in Acle is the historic Manor House, which has a rather odd extension at the east end, made from a WWII pillbox.

Just over 2 miles distant is Fairhaven Garden, famous for its collection of candelabra primulas.

More self catering near Acle >>

More bed and breakfasts near Acle >>