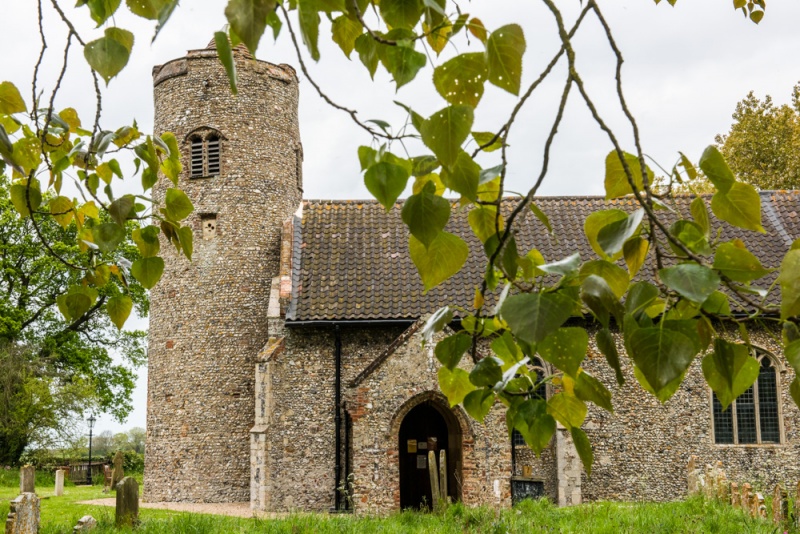 The oldest feature of All Saints is the round west tower. It must surely be Saxon, though the Domesday Book of 1086 makes no mention of a church in Hembington at that time. It was certainly erected no later than AD 1100, in traditional Saxon style. In the tower is a ring of two bells. The oldest was cast in 1621 in Norwich by the Brasyer foundry. It bears the arms of the city of Norwich and the mongoram AB W, for William Brend, the founder, and his wife Alice.

Look for the narrow tower arch and the small windows towards the top of the tower, both indications of late Saxon stonework. Saxon stonework survives in the nave walls, though much has been overwhelmed by 14th and 15th-century rebuilding. Set into the west wall of the nave is a small slab of Barnack stone with a circular hole cut through it. It seems almost certain to have been a lookout hole.

The chancel is 14th century, with a sedilia, or clergy seat, in the south wall. The pulpit is 18th century, retaining its original sounding board. One of the panels is carved with the initials TG : CW.

In the nave are ten old benches with carved ends depicting floriated poppy heads. One bench has a carving of an antelope. 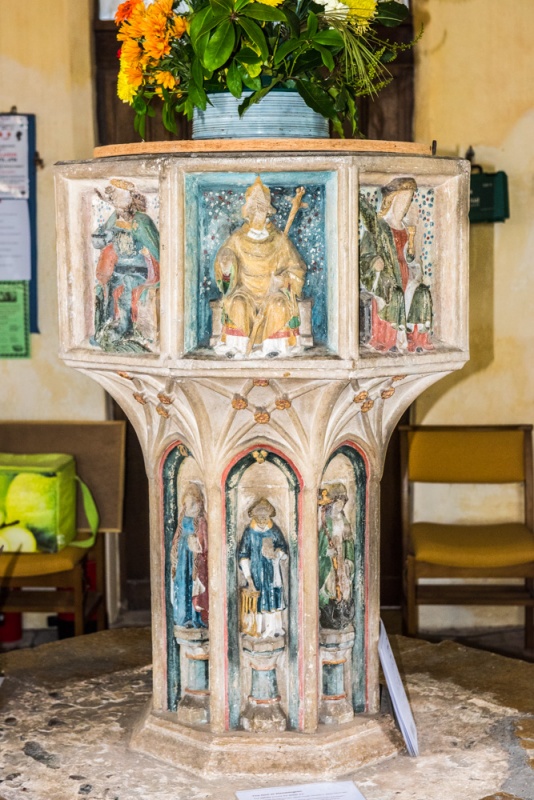 Near the south door is a 14th-century coffin lid carved with a pair of floriated crosses and a double omega sign. Another ancient coffin lid acts as a step down from the doorway.

The most interesting historic feature of the church is the beautifully carved octagonal font, set upon a stepped base. Each side of the bowl is carved with a seated figure. All but one are very clear. Starting from the west face the figures are:

The font is beautifully painted, the result of a careful restoration in 1937. If you are used to exploring churches where the medieval font has lost all trace of its original paint then the Hemblington font may be a bit startling, but the restoration has faithfully reproduced what it would have looked like when new. 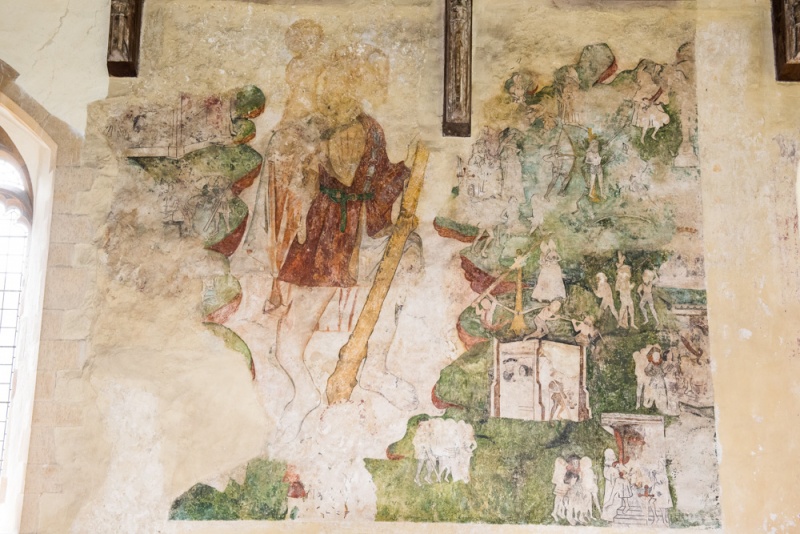 If you can tear your attention away from the font (I had trouble doing so), you will immediately notice the other major historic feature; a large medieval wall painting on the north wall. The painting was discovered in 1937, hidden under layers of whitewash.

In the centre of the scene is the gigantic figure of St Christopher, carrying the Christ child on his shoulder as he crosses a stream. The two banks of the stream depict the saint's life before and after his conversion to Christianity. In the 'before' scene we see Christopher in his original guise as the giant Reprobus, seeking to enter the Devil's service. Two devils riding horses speak to Reprobus.

Unfortunately, the rest of this 'before' scene has been lost, but the entire 'after' scene is intact. There you can make ten episodes from St Christopher's life after his conversion. We see the saint cast into prison by King Dagarus, and in prison, refusing the advances of two women, Vysena and Aquyiyne, sent by the king to tempt him. The saint then converts the women, who are brought with him before the king.

We see the women being martyred, then Christopher being scourged by the king's guards. Then we see Christopher shot with arrows. One arrow strikes the king in his eye. Christopher tells him to anoint the eye with his blood and it will be healed. We then see the saint beheaded, and in the final scene, we see a repentant King Dagorus converted to Christianity.

The Hemblington paintings are probably the best surviving medieval paintings depicting the life of St Christopher. They are extraordinarily richly coloured and beautifully detailed.

Another historic feature is a number of memorial brass inscriptions set into the floor. I counted seven brasses, including the oldest, to Robert Blakke, dated 1480, and his wife Margaret, dated 1481. Another brass is to Sir John Lansdam, a priest, who died in 1510.

There are more Blakke brasses, to William (d. 1522) and Alice (d. 1524). In the north-east corner of the nave are several medieval floor tiles that have been gathered together from around the church.

All Saints is a delight to explore. The countryside location is wonderful, and the church is full of historic interest. The church was open when we visited. 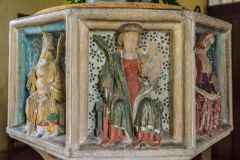 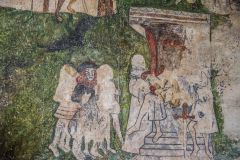 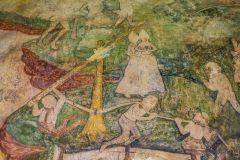 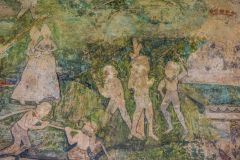 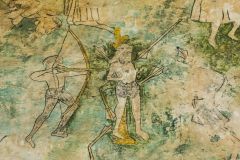 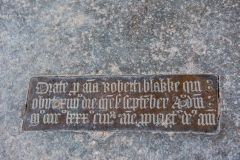 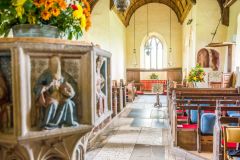 More self catering near Hemblington, All Saints Church

More bed and breakfasts near Hemblington, All Saints Church