HERITAGE HIGHLIGHTS:   The only monastery in England to survive the Dissolution of the Monasteries 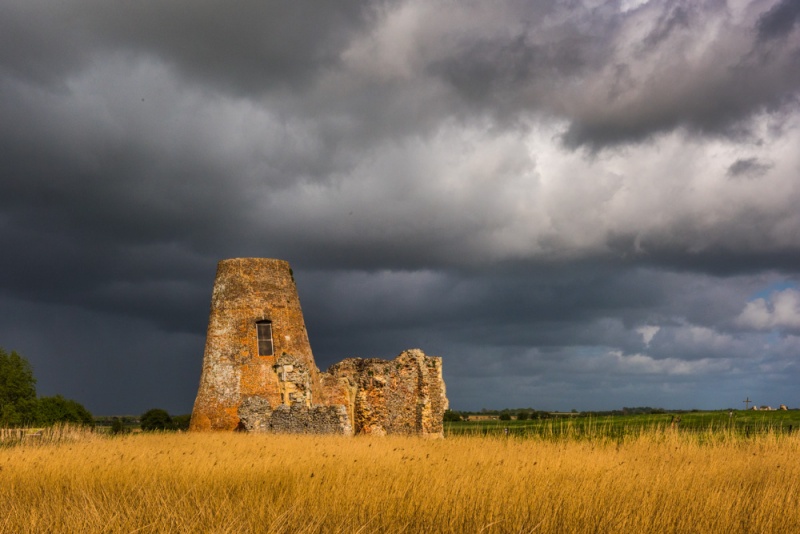 St Benet's Abbey is one of the most intriguing and historically important monastic sites in England. The abbey ruins lie on the north bank of the river Bure outside the village of Ludham, in the heart of the Norfolk Broads.

St Benet's was the first Benedictine monastery in Norfolk, founded on an island site surrounded by marshes around AD 1020 by King Cnut. The king may simply have been acknowledging the already sacred nature of a site where Christian hermits appear to have lived since the 9th century. Archaeological excavations support the theory that the site was occupied long before Cnut officially founded the abbey.

An anonymous 14th-century chronicle records that the abbey site was first occupied by a hermit named Suneman, who built a chapel dedicated to St Benedict around AD 800. Other hermits gathered at the site, drawn by Suneman's simple life of contemplation.

This monastic community lasted just 50 years until the Danes swept through Norfolk in the late 9th century. The site was reoccupied by another hermit named Wulfric in the middle of the 10th century, along with seven companions. They rebuilt the church and founded a religious community which lasted some 60 years.

King Cnut heard of the community while staying at nearby Horning. He gave the monks three of his manors (Horning, Neatishead, and Ludham) to support their community. This gift is said to officially mark the abbey's foundation as we know it.

This account of the abbey's history may be a mix of fantasy and fact, but parts of the story are supported by 13th-century sources that appear to be based on lost documents. It is entirely possible that King Cnut's gift was merely the first major donation to a monastery that had existed since at least the 10th century and perhaps much earlier.

Construction of the monastic buildings began in the early 11th century, with the first stone church probably built by Abbot Aelfsige during Cnut's reign. The church was extended in the 12th and 13th centuries, and it was finally completed in 1274. The complex of monastic buildings was bounded on the south by the river and on the other three sides by a ditch and earthwork wall. You can still see the remains of this earthwork enclosure and ditch. 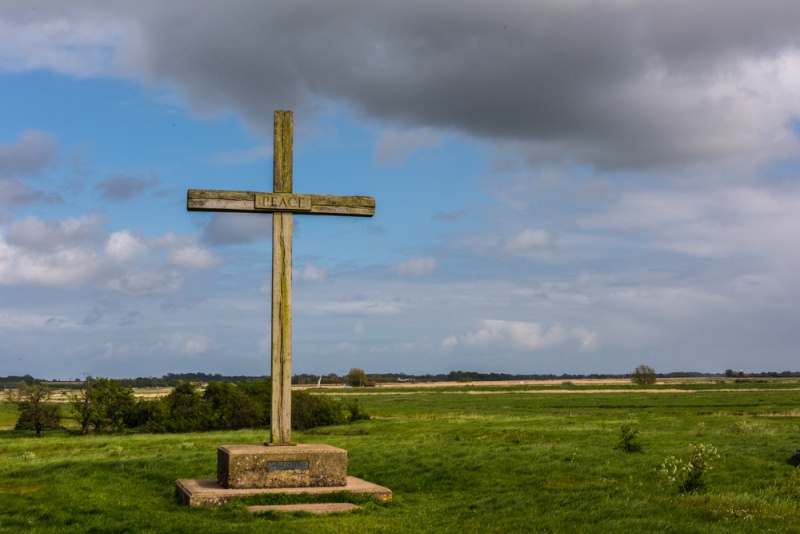 The site of the abbey church's high altar

The abbey found itself on the wrong side of political conflict in 1075, when one of its most important patrons, Ralph Gauder, Earl of East Anglia, led a revolt against William the Conqueror. The revolt failed, and Gauder's estates were granted to Roger Bigod.

Bigod, perhaps to distance himself from association with his predecessor, favoured Thetford Priory over St Benet's Abbey, and the abbey suffered as a result. It was still a relatively wealthy house, but what it really needed to become wealthy was a shrine to a popular saint.

It seems that the abbey tried hard to publicise St Margaret of Holm, a local woman killed at nearby Hoveton in 1170 and buried under the high altar. Her story never gained wide appeal, but it might account for the large number of Norfolk churches dedicated to St Margaret.

They also tried to create a tradition of veneration around the relics of Suneman and Wulfric, the abbey founders.

Despite the failure of these efforts to gain much traction the abbey still had estates throughout Norfolk, but never gained the wide appeal of other Benedictine monasteries like St Edmundsbury Abbey, which had the shrine of St Edmund the Martyr to attract pilgrims.

The abbot was granted the right to crenellate (i.e. create a defensible perimeter wall with a parapet) in 1327. The precinct wall still survives in places, within the earthwork wall that enclosed the entire site. 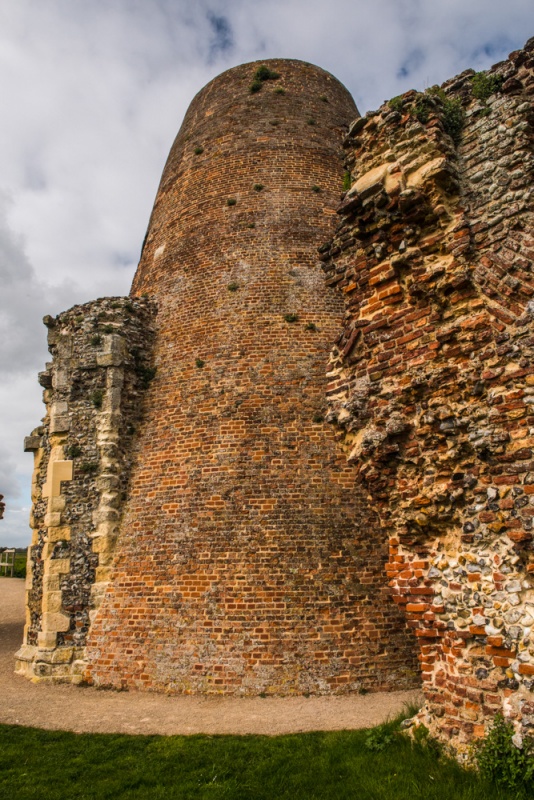 One of the most dramatic events in the abbey's long history came in 1381, at the outbreak of the Peasant's Revolt. A band of local peasants, tenants of the Bishop of Norwich, attacked the abbey, thinking that the Bishop was visiting there.

When they could not find the Bishop they seized the abbey's court rolls (legal documents such as deeds and grants) and burned them outside the abbey gatehouse. By burning the rolls they wiped out any official record of their tenurial obligations. Unhappily for the peasants, the rising was crushed, and the court rolls were rewritten.

One of the late medieval patrons of St Benet's was Sir John Fastolf, the model for William Shakespeare's Falstaff. The real Fastolf was a successful knight in the wars against the French, and built Caister Castle. He gave money to add a south aisle to the choir of the abbey church and was buried in a chapel near the high altar in 1459.

The abbey never grew very large; a visitation in 1514 noted 23 monks, though the abbey would have supported many more lay brothers and servants to carry out essential tasks. One of their tasks was to look after the monastic fish ponds, one of the best-preserved examples of medieval monastic fish ponds in England.

The abbey also managed extensive peat diggings throughout the medieval period; the same peat excavation that helped create the Norfolk Broads, as the low lying fields were repeatedly flooded. The abbey itself was flooded in 1287, when water reached so high that the precinct buildings could only be reached by boat, and the abbey church had to be used as a stable for horses.

The Dissolution of the Monasteries

When Henry VIII decided to break from the Catholic church in Rome, one of his decisions was to suppress all monasteries in his realm and seize all their property. Acts of Parliament in 1536 and 1539 dissolved all monastic houses in England. All, that is, except one. The lone remarkable survivor of the Dissolution of the Monasteries was St Benet's Abbey.

St Benet's was not the most influential, the wealthiest, or the most spiritually important monastic house in England, so how did it survive Henry's sweeping changes?

It seems that St Benet's poverty may have helped it survive, but so did the vagaries of fortune. In 1536 Bishop Nyx of Norwich died. The king's choice to replace him was Abbot William Rugge of St Benet's Abbey. Henry named Rugge as the new Bishop of Norwich but the new bishop was required to continue as abbot and use the abbey's coffers to finance his bishopric. Rugge had to agree to maintain a dozen monks at St Benet's.

That arrangement did not last, and within 5 years Rugge was forced to retire from church affairs, and by 1545 the monastery was abandoned. However, the abbey was never suppressed, and the Bishop of Norwich was, and is still today, titular Abbot of St Benet's. The Bishop still leads an annual service at the abbey site.

The abbey buildings were torn down by 1579, and the stone used for other building projects, including the Duke of Norfolk's palace in Norwich. The only building to survive seems to have been the abbot's lodging, which later became a popular waterside inn named the Chequers.

The surrounding marshes were drained in the early 18th century, and the old monastic ditch was used to carry water away. A drainage mill was erected at the eastern end of the ditch, but this mill has vanished today. 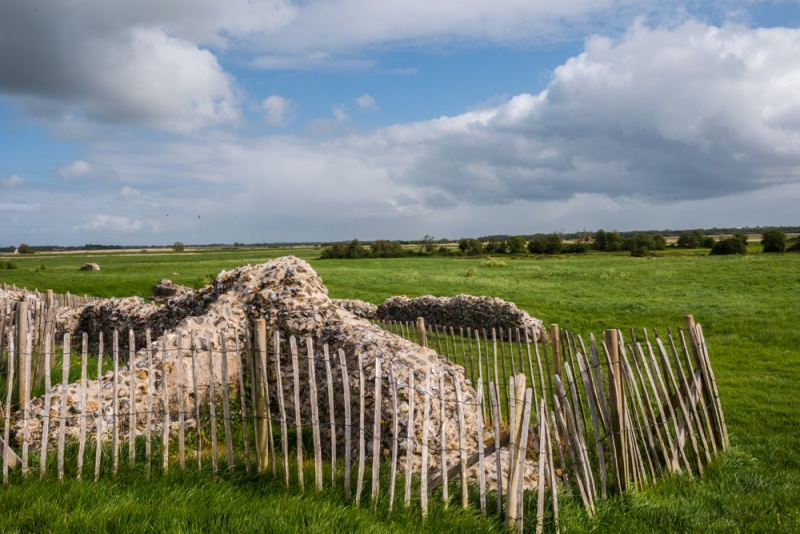 Ruins of the abbey church

The best surviving feature of the medieval monastery is the imposing 14th-century gatehouse, near the River Bure. In the late 18th century a new drainage mill was built, incorporating part of the medieval gatehouse. The upper floor of the gatehouse was pulled down so that the mill sails had space to rotate.

The mill drove a scoop wheel that lifted water from the ditch and sent it flowing into the River Bure. The mill sails blew off in 1863 and the mill and gatehouse became a picturesque ruin, sketched by numerous artists, and an iconic sight for sailors on the Broads.

By contrast to the striking remains of the mill and gatehouse, the ruins of the abbey church are patchy, with just part of the nave and transept wall still standing to any height, while a pile of rubble is all that remains of the south wall. A large wooden cross has been erected on the site of the abbey church's high altar, and it is here that the Bishop of Norwich conducts the annual service.

In 1915 St Benet's Abbey became one of the first Scheduled Ancient Monuments in Britain. The Norfolk Archaeological Trust, who look after several of the most important historic sites around the county, bought the monastic precinct in 2002 and the gatehouse and mill in 2004. The church ruins are still owned by the Diocese of Norwich and are still a consecrated site.

Access is fairly easy once you know where to go, though the abbey is not signposted until you get very close. The easiest way is to take the A1062 south-east from Ludham, and turn left at the Dog Inn onto Hall Road before you get to Ludham Bridge. The road is signposted to Hall Common. Just as the road changes course to become Hall Common Road, a lane leads off to the right, towards the River Bure.

A sign points towards St Benet's Abbey. Be careful; this lane is narrow, with only a few passing places for vehicles. Just follow along the lane, past farm buildings, until you come to a small parking area on your left. The ruined abbey gatehouse is directly in front of you.

Alternatively, you can arrive by boat. There is a free mooring place on the River Bure a very short distance from the gatehouse and mill.

You can also follow footpaths from Ludham village, though the route is not very direct. I'd recommend a good Ordnance Survey map if you would like to try the walk. The going is flat and easy.

There are regular guided tours The Friends of St Benet's Abbey from May through September, but the site is free to wander at any time. 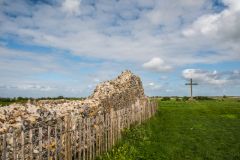 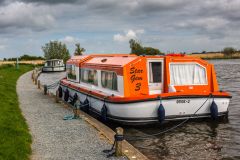 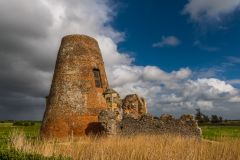 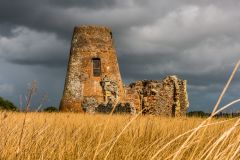