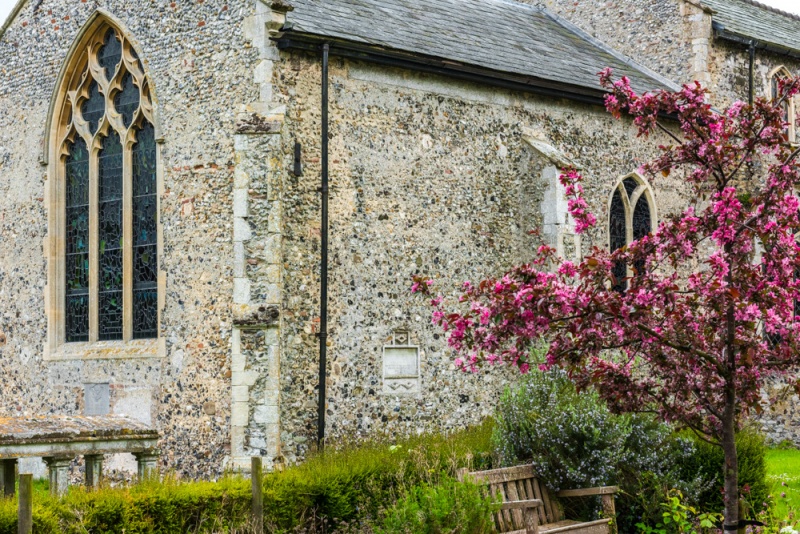 Two historic churches stand side by side in the Norfolk village of South Walsham. St Mary's is by far the larger; it dates to the 13th century and acts as the parish church. The smaller, and by a century the younger, is St Lawrence church, now redundant as a place of worship and more properly known as St Lawrence's Centre for Training and the Arts.

The former church is now a community venue for art exhibitions, concerts, art classes, and similar events. Indeed, when we visited there was a craft exhibition taking place, with displays by local craftsmen and women.

I mentioned that St Mary's is by far the larger church, but that was not always the case. St Lawrence originally stretched twice the length of its neighbour. Disaster struck St Lawrence in 1827, when a fire broke out in a cattle yard behind the Ship Inn, across The Street.

The blaze quickly grew out of control and spread to the thatched roof of the nave. The upper section of the tower collapsed, destroying the nave walls. Miraculously, the neighbouring St Mary's church escaped the fire.

The chancel was rebuilt on a smaller scale, leaving the ruins of the tower stranded well west of the end wall. And so it stood until 1970, when it was struck by lightning. The following year a sonic boom caused the damaged tower to finally collapse. The much truncated St Lawrence's served as a Sunday school for many years, but was finally made redundant in 1986.

The church restoration has swept away many of the historic features, but one thing that struck me was the very large Perpendicular windows, fitted with beautiful tracery. 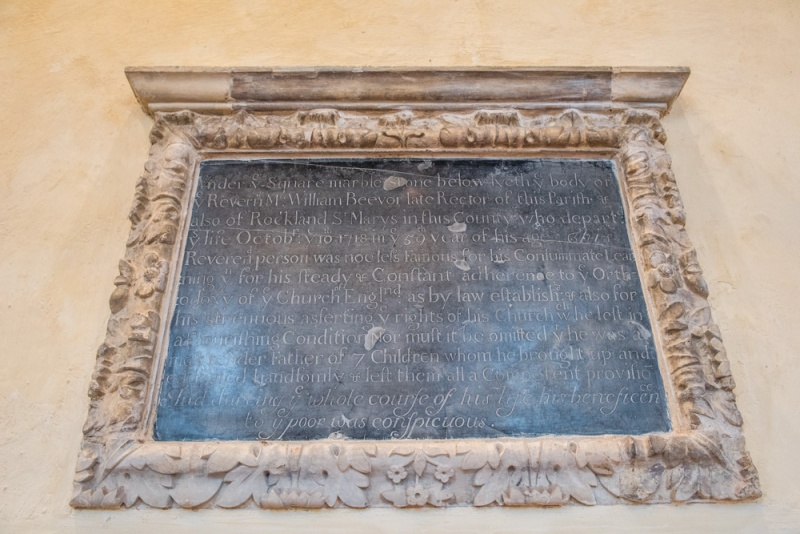 Several very good wall tablets survived the restoration as well. On that caught my eye was to Rev. William Beevor, who died in 1718. His rather glowing epitaph tells us that:

'This Reverend person was no less famous for his consummate learning, and for his steady & Constant adherence to the Orthodoxy of the Church of England as by law established & also for his strenuous asserting the rights of his Church which he left in a Flourishing Condition nor must it be omitted that he was a most tender father of 7 children whom he brought up and educated handsomely and left them all a competent provision. And during the whole course of his life his beneficence to the poor was conspicuous.'

By contrast to the effusive epitaph on Beevor's memorial, the nearby wall tablet to Rev. John Toplis seems almost spartan. Toplis, who died in 1857, served as rector of St Lawrence for 33 years. He was also a fellow and tutor at Queens' College, Cambridge.

Another very good memorial is a grave slab set into the floor, commemorating Arabella Lyng, wife of Benjamin Lyng, rector of St Lawrence. The Lyng memorial is notable for a beautifully carved coat of arms showing a trio of fish and an anchor beneath a gaudy helmet.

Excavations on the church site discovered what may be the remains of a medieval reliquary setting, though there are no records of a saint's relics being stored in the church. The excavations also revealed the foundations of an earlier Saxon church, of which no trace remains above ground. 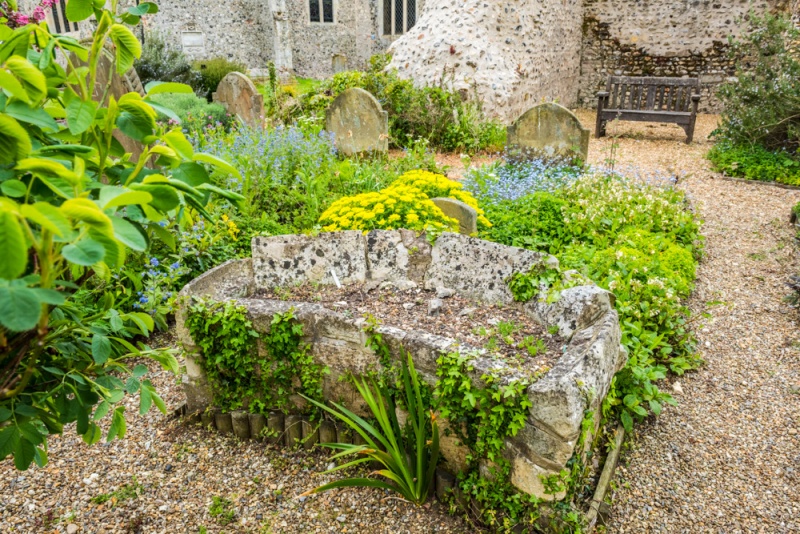 One of the most intriguing features of St Lawrence's is The Sacristan's Garden, occupying the site of the original nave and tower. The entire west end of the building was destroyed in the 1827 fire and never rebuilt.

In 1997 the area was restored as a garden, planted with medicinal herbs and plants known to have been used by sacristans at the time St Lawrence's was built in the 14th century.

Colourful flowers grow amidst old gravestones, and trellises climb where once the tower stood. It is a beautiful, quiet space, and it is wonderful to see what might be the sad ruins of the historic church put to such a picturesque purpose.

Since the west tower was destroyed in the fire a single bell hangs from a bellcote projecting from the west wall of the chancel, overhanging The Sacristan's Garden.

St Lawrence was in the news for all the wrong reasons in 2013 when thieves stole 15th-century decorative frieze stones of flint and stone from the ruins of the tower. The heavy stone blocks were prised out of the collapsed tower wall and taken secretly away. Thankfully the stones were purely decorative and not structural, but the cost of replacement or repair was prohibitive, and they have not been replaced.

The church is regularly open for events, which are advertised locally and on the official website (see below). We were fortunate that the church was open when we visited, though did have to dodge around the numerous craft booths to take a few photos of the interior. 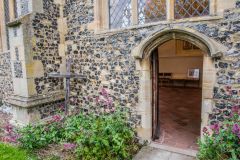 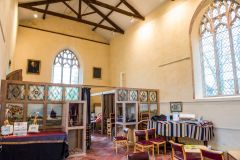 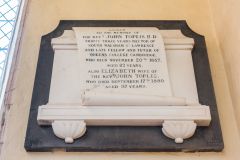 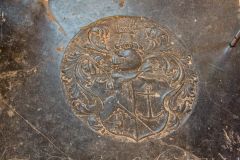 Self Catering near South Walsham