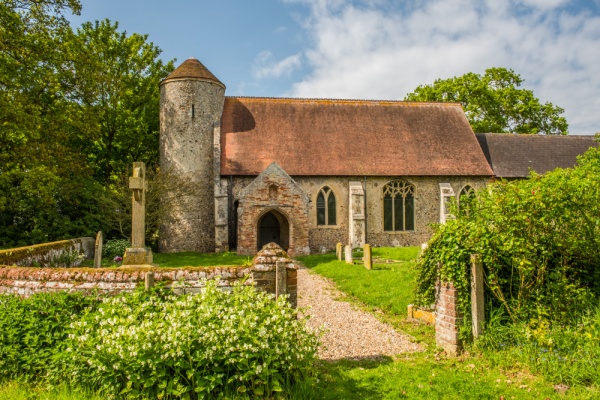 St Mary's church, Moulton, stands in rustic splendour beside an isolated farmyard. The building probably dates to the Norman period; the round tower is certainly of that date. 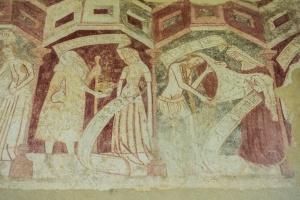 The tower has a very attractive conical roof of tile and looks almost continental in style. The remainder of the church is composed of a nave, chancel, and south porch, in a fascinating mix of materials including flint, stone, and brick. The porch was added in the 16th century, while the chancel and nave are several centuries earlier.

The church stands a mile from its village, beside moated Moulton Hall. The location suggests that the first church here was built by the lords of Moulton manor as a family chapel and only later became the parish church.

The most interesting historical part of the interior is a wonderful series of 14th-century wall paintings, which show St Christopher and the 'Acts of Mercy', a kind of supplementary set of commandments or admonitions for good Christian living. These Acts came in several versions; the one depicted here is called the Seven Works of Mercy, and includes feeding the hungry, clothing the naked, comforting the sick, and similar acts of kindness and human service. The extremely vivid set of seven paintings show these acts of kindness being performed, with a figure of Christ blessing the good deeds.

The figure of St Christopher is in its traditional place on the north wall, where visitors entering the church will see it as they come through the south door. The left side of the painting has a large circle cut into the plaster where a consecration cross was inserted to commemorate the church's rebuilding in the early 16th century.

There are a set of 15th and 16th-century brasses to the Anguish family, a lovely Jacobean pulpit - paid for by one of the Anguish family - and a 13th-century font bowl on a much later base of Purbeck marble. Over the tower arch is a richly painted board with the Ten Commandments, Lord's Prayer, and Creed dating from the 17th century. 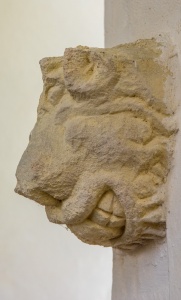 Medieval carving of
a beast's head

Look for the wall monument to three members of the Anguish family, erected by Edmund Anguish in 1628, showing a man with his hands resting on a skull above a couple facing each other across a prayer desk, with their children on either side. The arms of Thomas Anguish (d. 1785) are depicted in stained glass in the east window.

Beside a nave window is a curious carving of a grinning beast's head, looking very much like a lion baring his teeth. Preserved inside a glass container is a grave decoration that once adorned the memorial of James Alexander, who died in 1906.

Partially covered by the communion rail is a worn medieval coffin, and set into the sanctuary floor is a ledger slab to Thomas Wytherley (d. 1693). Nearby, on the south chancel wall, is a double piscina from about 1300, with separate drains for the communion vessels and for washing the priest's hands.

The parish chest bears the date 4 April 1694. and the beautifully carved pulpit is early 17th century. We know something about its origins, as a visitation by Bishop Scambler in 1593 reported that Moulton had no pulpit. The parishioners were ordered to provide one by 5 February 1594. The style of the present pulpit suggests it was a bit later than that; perhaps the parish was slow to provide money for a pulpit, or their initial effort was deemed not good enough and replaced with this one.

Set into the floor of the nave are three memorial brasses. The oldest is to John Holler (d. 1505) and his wife. The second is to Henry Palmer (d. 1525) and the last to Anne Underwode (d. 1535). There is also an intriguing 1544 kneeling effigy to Thomasine Palmer (d. 1544). The Palmer brass is a palimpsest, with the Underwode brass being inserted on the reverse of a brass to an unknown Flemish lady from around 1500.

St Mary's is no longer used for regular worship and is in the care of the Churches Conservation Trust, who keep it open as a rule. 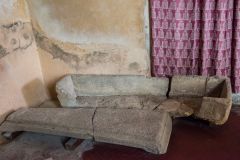 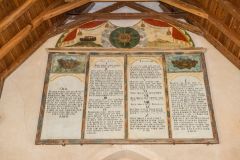