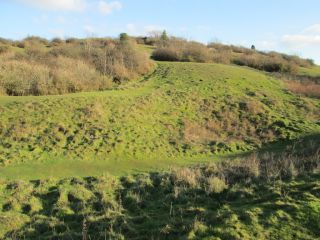 Cissbury Ring
A very large Iron Age hillfort set on a chalk promontory of the South Downs, Cissbury Ring was built around 300 BCE as a series of earthwork banks and ditches surrounding a level area of about 65 acres in size. It is the second-largest hillfort in England, second only in size to Maiden Castle in Dorset.

The defensive bank was originally topped with a palisade of wood, and to Iron Age attackers it would have created a quite formidable appearance. The site was occupied until sometime between 50 BCE and 50 AD, though it was farmed during the Roman occupation of the region. The ramparts were rebuilt during the 5th century, though it is not clear whether this was meant as a defence against Saxon invaders, or built by the Saxons themselves!

Excavations have shown that the site was occupied as early as the Stone Age. Remnants of flint tools and the remains of Stone Age pit mines show that there was very active mining taking place here about 4000 BCE, and the flint mined at Cissbury Ring was traded as far as the Mediterranean.

Some of the pit mines descend to a depth of 40 feet, with horizontal shafts radiating out from the pit, which is quite extraordinary when you consider that the Stone Age miners were using only simple tools like deer antlers as tools. A similar flint mining system can be seen at Grimes Graves, near Thetford, Norfolk.

During the Elizabethan period, the site was used for an Armada beacon, and much later, in WWII, as an artillery emplacement for guns overlooking the English Channel.

The hill is about 600 feet high, and the climb will take some exertion, but your reward will be fabulous views. You may also be lucky enough to see some of Britain's rarest wild orchids, and unusual butterfly species such as the Adonis Blue, which thrive in the natural chalk environment.

More self catering near Cissbury Ring >>